The GOP Primary: The Good, the Bad, and the Annoying 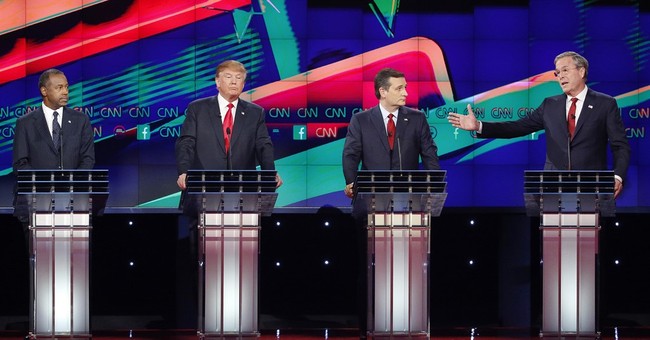 The blobby Republican primary field is finally beginning to take shape, but sadly that shape is a mushroom cloud. For Donald Trump and his fans, that’s a metaphor that refers to a nuclear explosion. You people seem to think that knowing about H-bomb stuff means you are part of the Great GOP Establishment Conspiracy.

This is the week we learned that knowing about the nuclear triad is unnecessary. You only have to know that “nuclear, the power, the devastation, is very important….”

I was in Vegas for the debate, and the main takeaway is that it’s better to watch it at home. Besides the obvious fact that you can’t switch over to a Gilligan’s Island rerun every time Kasich opens up his sanctimony hole, you can’t get a drink at the theater. A GOP debate is 1000 percent less interesting without cabernet. The second is that anything their hero says causes high-pitched shrieks of delight from Rand Paul’s supporters. Both of them.

I like Ted Cruz – I gave him money and after the debate attended a small fundraiser for him at a private home in my town. He’s the closest thing to the guy I’d be supporting if I had picked someone yet. He started out his campaign off-putting to normal people (as lawyers usually are) and has worked hard to be more of a calm, pleasant, and funny family man than the monstrous caricature the media has tried to sketch. But he’s got a ways to go. Did you know he went to Harvard Law? Well, like any other Harvard Law grad, if you listen to him for 30 seconds, you will. You can have a Harvard Law grad doing a closing argument on the most insignificant rear-ender whiplash case and it’ll go something like, “And the evidence shows that Mr. Smith’s car went through the red light, a red light not unlike the one just outside Harvard Law School, which I attended.”

Cruz is brilliant, and the problem is that he talks at people like he’s a brilliant guy. Not “with.” “At.” When he kept filibustering through the buzzers and Wolf Blitzer’s pleas, most of the audience was stifling the urge to yell, “Be quiet – it’s Kasich’s turn to talk!” Yeah, it was “Let Kasich talk” bad. Lawyer to lawyer, Ted, less talking, more listening.

But what Cruz says is pretty good. The big concern out there is that he’s a neo-isolationist, but he can cure any confusion about that with the eight words all conservatives long to hear: “My Secretary of State will be John Bolton!” Then he should add, “And my UN ambassador will be Richard Grennell!” This will make conservatives seek a cigarette and cuddling, while the liberal head explosions it will cause would qualify these statements as the fourth leg of the Triad.

In contrast, Marco Rubio said (eloquently) stuff that may very well end his campaign. He spent a long time discussing laudable goals about border security and so forth, but the punchline was that, in the end, illegal aliens are going to get to become citizens. Talk about tone deaf; a huge part of what initially fueled Trump was the fact that as much as the GOP establishment inexplicably loves the suicidal idea of turning lawbreakers into 11 million new Democrats, actual Republican voters are just not down with it.

I could support Rubio – his foreign policy is solid and polls consistently show him best situated to beat that sexual abuser-enabling libfascist harridan. But until he says, “Let me be unequivocal: No illegal alien will ever become a U.S. citizen unless he goes home and starts the immigration process over,” he’s not getting my primary vote. Nor, I suspect, will he get many others.

Rubio is the new Jeb, at least in the minds of some. Where Trumpkins used to respond to any criticism of The Donald with accusations that you are shilling for GOPe posterboy Jeb, now it’s that you’re shilling for GOPe posterboy Marco. But Marco isn’t Jeb. Marco beat on Trump. Trump, in turn, beat on Jeb. Jeb’s gone from terrible to just sad. Trump swatted him away like Marmaduke punting the Taco Bell Chihuahua with his massive paw. Why is Jeb still putting himself through this humiliation? To quote Private Hudson, “Game over, man, game over.”

Christie had a generally good night, not that it’s going to help. He has a terrific way of ignoring the people on stage with him and talking directly to the audience. Unfortunately, when the audience looks back it sees him hugging Barack Obama. And that’s something a conservative just can’t unsee.

Rand Paul used to have a point, adding some libertarian color to the party. But his original foreign policy was essentially unserious, and his current turn toward a more muscular assertion of American leadership is unconvincing. You get the impression Rand really wants to be talking about the menace of chemtrails.

Carly Fiorina is continuing her run for vice president and I wish her well. Ben Carson remains a great doctor and a wonderful man, but voters are moving on. And John Kasich is still in the toilet; he had a bad night on stage and off because he is still annoying – including to donors.

And then there’s Donald Trump. Now he’s playing footsie with dictators. His followers think that it’s brilliant diplomacy to allow himself to be flattered into submission by a KGB thug trained in deception and disinformation. I think it’s a dammed embarrassment.

In the end, I expect one of the Cuban-Americans to win the nomination – it’s inconceivable that Republicans will offer Donald Trump as their candidate for a position requiring him to have his short fingers hovering over The Button. But then, in Trump’s favor, Hillary considers at least half of all Americans her enemy. In fact, this is in everyone on that stage’s favor. This woman is a monster whose combination of stupidity, greed, and venom means a Hillary Clinton presidency could literally tear this country apart. So at the end of the day we Republicans need to get serious and get down to the business at hand – beating her.