Kansas Is Another Unforced Error By the GOP Establishment 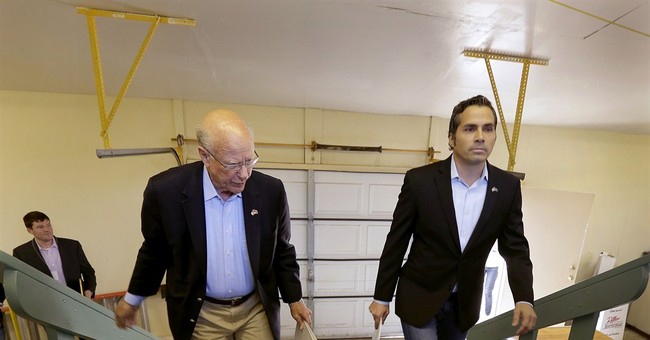 It appears that the people of Kansas are getting their sanity back instead of falling for Harry Reid's sucker bet by electing the world’s least independent “Independent.” But the failure of Pat Roberts to lock down a gimme Senate seat is the kind potentially disastrous misstep is an important lesson for us all, from “irrational, scorched-earth conservatives” to “spineless RINOs.”

We may not like each other much, but we’re stuck with each other unless we want to give over our country to a party that thinks the First Amendment allows way too much freedom of speech and religion, and that role of normal Americans is working to refill the EBT cards of the dangling-jawed losers who make up the Democrat party’s voter base.

With that in mind, it’s time for us to stop stumbling through election cycle after election cycle making dumb mistakes and tossing life preservers to neo-Marxist Democrat dorks.

No component of our coalition is blameless. Whether it’s trashing our brand by nominating geniuses like Todd Aiken or inciting vicious primaries to preserve doddering has-beens like Thad Cochran, we need to get our … stuff … together. Our country is at stake, and this fight too important to lose because we govern ourselves with our feelings instead of our predatory reptile brains.

This is about winning, and doing what it takes to move forward under fire.

Hey, Pat Roberts is a nice guy. He served his country honorably as a Marine and for a long time as a senator. And he was too damn old to run again this time, especially since he moved out of Kansas, mentally and residentially, long ago. On the plus side, at least Roberts didn't have to get on TV and announce that he isn’t a witch. But if it weren’t for the current crew of handlers who rode in to rescue his floundering campaign keeping him in a headlock, who knows if the ancient 78-year old candidate would have wandered over to a microphone and answered some reporter’s question with a round of speculation about the eerie powers of a woman’s uterus.

How the hell does a Republican fall behind in Kansas anyway? This is where the GOP Establishment should have stepped in to do the kind of useful thing establishments are supposed to do. Instead of enabling his desire to stay in the Senate, some Establishment icon should have taken Roberts aside and said, “Hey Pat, we love you. Thanks. You’re out. Time for some new blood. Here's a gold watch. Enjoy your retirement.”

See, having an establishment isn’t necessarily all bad. A proper establishment can look at the big picture, protect the brand, and develop future leaders. It should have responded to Robert’s idea of running for an umpteenth term with, “So Pat, who’s that going to work without a penny of funding from the national Republicans?” But the Establishment guys decided to become enablers of their buddy’s ego instead of speaking truth to mediocrity.

Pat Roberts, and a lot of other crusty senators and congressmen – Thad Cochran, I'm looking at you – need to put the cause of conservatism ahead of the cause of their vanity. The most important thing about this election is not ensuring the Thad Cochran or Pat Roberts or any other individual wins. It's about the conservative movement. It's about this country. And that means that if you are not the very best candidate, then you need to step aside. Period.

Now, if you're reading this, chances are you're probably not a member of the GOP Establishment, nor even sympathetic to it. You’re likely to be a hard-core Constitutional conservative like me who cares about the Republican Party precisely (and only) to the extent it offers the best means to create conservative change.

Yeah, that’s what happens when you insult your base.

So the question is, what can we conservative do when others in our coalition do stupid things? Look, we can't control what the GOP Establishment does. And, to paraphrase people 25% of Pat Robert’s age, moderates are gonna moderate.

We can only control what we do. And what we have to do is figure out what is best for the conservative movement and then do that, even if we have to struggle to keep our lunch down.

Step One is to grow up, put on our big boy pants, and realize that we are not always going to get our way. Sometimes we just need to suck it up and vote for people who feel as much love for us as we conservatives do for them. Milton Wolf would have made a great senator, and for several terms. Instead, Pat Roberts decided he needed one last hurrah and the Establishment enabled him. It’s an easy choice. Roberts will obediently vote against Harry Reid and Barack Obama. His “Independent” opponent will eagerly don a gimp suit for them.

Yeah, I'm annoyed, and I support Pat Roberts 100%. And Thad Cochran. And Mitch McConnell. And whichever one of those RINO women is running in Maine. As you must as well.

Step Two is do what we have to do to move America to the right.

This is not about us being mad because the Establishment was mean to us. Look on the bright side – the present GOP Establishment is going away. These guys are ancient. We, the excited, active and engaged Constitutional conservatives, are going to inherit the earth. We're taking over local GOP committees. Our candidates are the ones running for the entry-level offices. The dinosaurs are going away. Soon, the RINOsaurus will be extinct.

So, in the short term, we to need primary where it’s smart, but always – ALWAYS – support the GOP nominee, no matter how annoying, while we make out long march through the institutions of the Republican Party. A bad Republican is better than the best Democrat. But it doesn’t mean you can’t register your displeasure where it hurts, in their wallet. Starve the consultant class by ignoring the Establishment’s obnoxious email solicitations and instead give directly to someone you know and trust.

Now got out there a make sure the GOP wins in November.