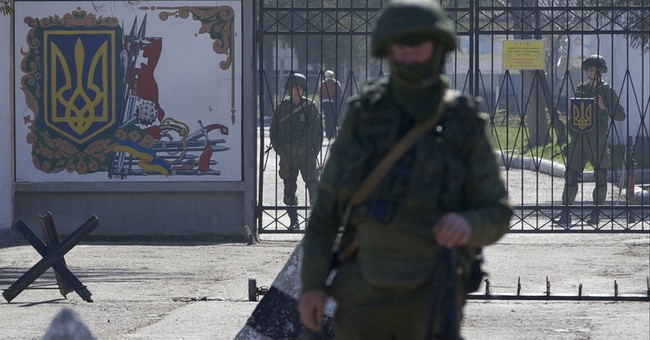 It’s a safe bet that the next smug liberal dork you hear repeating the cheesy cliché about how “Reality has a liberal bias” doesn’t live in Ukraine.

The key to understanding liberals is realizing that they are immune to argument. The concept underlying the idea of a debate is that facts and reasoning can lead one to change his previous conclusions. But liberals begin with their conclusions; facts and reasoning that may undermine the preexisting conclusion must be at least ignored, if not actively attacked. This is why you see liberals shouting about jailing global warming deniers as blizzards rage outside.

The problem liberals always face is that the world refuses to honor their preconceived notions. Sometimes we get lucky and the liberal wises up, at least a little. For instance, Jimmy Carter woke up to the fact that the Soviet Union was composed of genuine bastards when they invaded Afghanistan, and in fits and starts he took action. This shocking burst of foreign policy competence is almost single-handedly responsible for raising Carter’s ranking on the list of America’s greatest presidents all the way up to 39th. Zombie Millard Fillmore was totally bummed.

Now we are in the almost unimaginable position of looking back at Jimmy Carter as an example of comparatively sure, savvy leadership. The Russians invaded Afghanistan and Carter armed the rebels. The Russians invaded Crimea and Barack Obama went on Ellen to hear the hostess gush about how much America loves Obamacare.

It’s no surprise that both Carter and Obama were stunned to find that their counterparts out there on the Eurasian steppes were evil, violent thugs determined to maximize their own power by whatever means necessary. After all, in the liberal universe there are no bad people, except for conservatives and male college students who fail to obtain a notarized statement from their drunken dates authorizing them to advance to second base.

After all, human nature is just a construct. At heart, everyone is just a metrosexual college student sitting in a gender studies class, eager to work together with a diverse group of other like-minded individuals to forge a better tomorrow.

They are desperate to change the subject from the invasion of Ukraine back to their own agenda. The people of Ukraine? Collateral damage in the cause of pushing the progressive program.

You would think that the invasion of a major European state might alarm or upset the Western Europeans. And it does. They are angry that they are expected to rise out of their welfare state stupor and act. They won’t. The Ukrainian people’s cries for help get treated like Kitty Genovese’s (at least in the New York Times’s false telling). The West just doesn’t want to get involved.

Years ago, the Europeans made a conscious decision to inhabit an imaginary world where everyone is just as emasculated and effete as they, where everyone wants to anesthetize themselves from the pain of responsibility with social spending and moral posturing. But most of the world didn’t get the memo that weak is the new strong.

While Europe slashed its military budgets to pump up subsidies for vast populations of unemployed, childless university grads and middle-aged pensioners, the rest of the world stuck with the tried and true methodology of might making right. China is increasing its military budget by double digits. Iran is cooking up a hot rock. And Assad’s gleeful slaughter of his own people continues, with thousands figuratively strung up with surplus red line.

America, sadly, is following the Europeans’ path to helplessness. The richest country in the world is gutting its military just as its enemies – unlike liberals, conservatives understand that we have enemies – are building their strength and flexing their muscles. It’s not that we are short of the money we need to fund an adequate military. It’s that we instead choose to spend the money on deadbeats, crony capitalists and farcical liberal fads du jour.

It’s shameful. Our warriors shouldn’t get the scraps left over after the pigs finish feeding at the trough. How about we make the supreme sacrifice of ending such imperatives as cowboy poetry slams in order to make sure we have a United States Marine Corps that won’t fit comfortably inside a banquet room at the Rancho Cucamonga Holiday Inn?

If our leaders could accept facts, they would have responded to Putin by reversing the decimation of the greatest military – and greatest force for human freedom – in all of history. But they didn’t.

If our leaders could accept facts, they would forget their climate change foolishness. Europe outsourced its natural gas supply to Russia, letting those Slavs far away do all that dirty drilling and refining. Our leaders should have eviscerated Putin’s economy by cutting the regulations that prevent the United States from ramping up its natural gas exports and replacing Russia as Europe’s gas station. But they didn’t.

They heard the trumpet sound, and they turned up their Mumford & Sons MP3 to drown it out.

This isn’t just about Putin. This is about every neo-fascist left-wing dictatorship out there smelling weakness, and what weakness smells like is blood. This isn’t going to just stop. This is only going to get worse until we stop it.

Liberals won’t face that truth, but we conservatives understand that reality has a conservative bias. And the most important reality right now is that if you won’t stand up with a rifle and a fixed bayonet and hold your ground, sooner or later you will be someone’s slave.