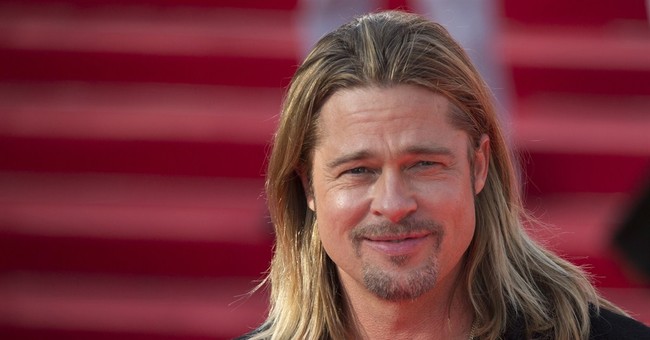 Hollywood is making another pathetic attempt to manufacture villains out of real Americans in its latest loud, dumb and explodey retread, White House Down. Surprise! The bad guys are, again, our military. Yet, bucking the trend, another big-budget film – the zombie apocalypse epic World War Z – not only depicts our American warriors as the heroes they are but even gives props to the Israeli Defense Force.

I know - it’s easier to believe in zombies than in a major Hollywood movie where American and Israeli fighters aren’t the bad guys.

My friend and Townhall columnist Lisa De Pasquale did us all a favor by seeing White House Down so we don’t have to. When the same movie about an attack on 1600 Pennsylvania Avenue flopped two months ago it was called Olympus Has Fallen. Before that, it took place at Nakatomi Plaza and was called Die Hard.

At least in Olympus, the bad guys were North Koreans. In Down, the “military-industrial complex” and right-wing soldiers are mad because liberal President Jamie “Obama is Jesus” Foxx wants to take all US military forces out of the Middle East. Yeah, because it’s not like a bunch of liberals in the government would be pushing to intervene in the Middle East while the military resists the idea as short-sighted, unworkable and just kind of stupid.

These right wing monsters also blow up the Capitol, which was no doubt inspired by the real-life antics of conservative activist Bill Ayers and the Weatherman Tea Party Front.

Basically, the filmmakers’ big problem with these villains is that they behave like leftists.

It’s always refreshing to see popular culture take the lead from the Department of Homeland Security and finally confront the real threat to America – its fighting men and women. Except, according to De Pasquale’s review, there are no women on the terrorist team. Nor minorities. So, in the eyes of Hollywood, the military is an all-white, all-male organization so dedicated to unfocused imperialism that it is willing to commit mass murder of fellow Americans for the chance to die in some Middle East hellhole.

Who needs to risk getting a mouthful of fist by spitting on our soldiers in-person when you can do it safely from on-screen?

If you spend one damn cent on this crap, you’re spitting on our troops too. Remember that when one of your friends innocently suggests going to see this celluloid slander having merely seen the trailer and thinking it’s just a way to turn off your brains for a couple hours of action-packed fun.

Repeat after me, conservatives: Not one damn cent.

In contrast, World War Z is a pleasant surprise. Based (loosely) on the terrific novel by Max Brooks about the impact on society of a plague of hungry ghouls, Z actually depicts our military as competent, capable and brave. It shows American and Israeli soldiers doing what soldiers do in real life – risking their lives to protect their people.

This movie is also the best advertisement ever for the AR15 rifle platform. M16s and M4s, with all sorts of modifications, abound. They protect civilization from ravenous hordes of mindless savages bent on the destruction of all decent human beings. You know, sort of like in real life.

Occasionally, liberals will mock conservatives for their reluctance to relinquish effective weapons due to worries that the thin veneer of civilization might crack. I don’t remember any of those liberals on the streets with me during the Los Angeles riots – I expect they were cowering up in the Hollywood Hills behind me and my fellow soldiers’ M16A1 rifles.

World War Z is not really about brain-eating zombies but about the resilience of civilization and how its stability relies on a relatively few military and civilian defenders. The not-so-subtle message is that when civilization crumbles, feel-good liberal platitudes make way for reality.

Accordingly, it’s not surprising that when all hell breaks loose, Brad Pitt grabs a rifle. And as for the dudes who decide to take a break from fleeing the zombies by assaulting Ms. Pitt, Brad’s “rape whistle” sounds a lot like a .30-06.

But World War Z is a lonely exception to the general Hollywood rule – that everything bad in the world somehow comes back to those perceived as conservatives. In White House Down, the military goes kill-crazy to protect its war machine profits. In The Purge, law and order types want to engage in a bloody free-for-all of homicide. And in Footloose, for some reason Christians want to keep Kevin Bacon from dancing.

But, of course if it’s corporate profits that need protecting, the real experts are the Democrat Party’s crony corporatist constituents. If you want an urban bloodbath, head to any Democrat-run big city. And count on the Democrats’ feminist phalanx to whine about the hetero-normative, patriarchal paradigm of Kevin Bacon’s sexy shimmying.

From domestic terrorism to corporate conspiracies, from inner city slaughter to petty-fascist nannyism, the real source of every evil the Tinseltown left decries is right there in the mirror. As usual, movies aren’t the only thing liberal Hollywood is projecting.