Where Pope Francis Misses the Mark

Kristan Hawkins
|
Posted: Apr 15, 2018 12:01 AM
Share   Tweet
The opinions expressed by columnists are their own and do not necessarily represent the views of Townhall.com. 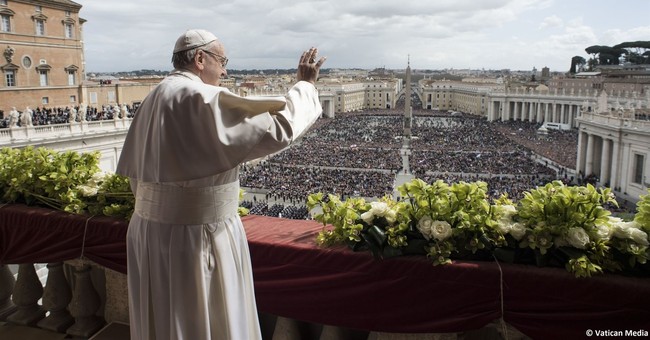 Pope Francis recently wrote in his newest Apostolic Exhortation that it would be an “ideological error” for Christians to act as if the “only thing that counts is one particular ethical issue or cause that they themselves defend.”

In particular, after clearly stating the Church’s opposition to abortion, he gave the example of defending the preborn, saying that it must not be treated more importantly than “the lives of the poor, those already born, the destitute, the abandoned and the underprivileged, the vulnerable infirm and elderly exposed to covert euthanasia, the victims of human trafficking, new forms of slavery, and every form of rejection.”

Pope Francis is definitely right in that we should be responsive and aware of all the issues mentioned. In fact, for myself and many other converts to Catholicism I know, the Church’s unwavering consistency on life was what caused former Protestants like myself to give the Church a second look from what we thought we already knew about Catholicism. But, there is nothing wrong with focusing on abortion. I don’t fault people who devote their lives to homelessness, healthcare, or immigration, as they are important issues Christians are called to address. But I’m also not going to apologize when I say I believe abortion is the most important to me.

We all have a role to play, and those of us moved to defend preborn infants and their mothers often specialize in those unique needs. While abortion isn’t the only issue that counts, it does deserve the most attention from Christians worldwide as no other injustice kills more each year and the Church has clearly defined abortion, the taking of innocent human life, as an intrinsic evil.

While this was just the example given, it is indicative of the never-ending battle between those who believe that abortion must be the most important issue, and those that believe you cannot be truly “pro-life” unless you also embrace a wide-range of other issues, not only embracing them, but holding a particular viewpoint. You cannot simply want quality health care for every person; you must want socialized medicine. You cannot just want humane treatment of immigrants; you must also want open borders and amnesty. Unlike abortion, where we are called to oppose it in every circumstance so policy disagreements with fellow Christians should be scarce, these other important issues are not defined by our Church as “intrinsically” evil and therefore reasonable Christians can truly disagree about the best policy solutions to solve these crises.

This week I’ve been reading a lot about Martin Luther King Jr. and thinking about 1960s America. There were plenty of issues for our nation to confront then, including poverty, the sexual revolution, and crime. But does that mean we fault those brave leaders who focused on achieving equal voting rights and equal treatments for African-Americans but didn’t work to solve the crises of crime and the breakdown of families across our nation? Surely, reasonable individuals can see the importance of those freedom fighters who fought for equal treatment and voting rights for African-Americans.

After reading the same passages over and over again in "GAUDETE ET EXSULTATE,” I’m still saddened that our Holy Father choose to play right into the hands of abortion activists who still try to claim that pro-lifers don’t care about anyone other than the preborn, that somehow our belief that life is valuable stops once you exit your mother’s womb. His words read like a repudiation of the pro-life movement that has acted, as he advocated for so elegantly, with parrhesía --  “meaning to speak candidly or boldly and without fear.” For more than 45 years, we have never failed to speak up for those who have no voice in our society, nor do we intend to stop.

For my Protestant brothers and sisters who fight along side of us in the pro-life movement, Pope Francis' Apostolic Exhortationis not a change of church teaching and is not considered infallible by the Catholic Church. Please don’t let these words turn you off of giving the Church another look.

For my Catholic brothers and sisters, let us pray for our Holy Father and his advisors daily. May we show him what our movement is truly about.