Kimberly Fletcher
|
Posted: May 07, 2022 12:01 AM
Share   Tweet
The opinions expressed by columnists are their own and do not necessarily represent the views of Townhall.com. 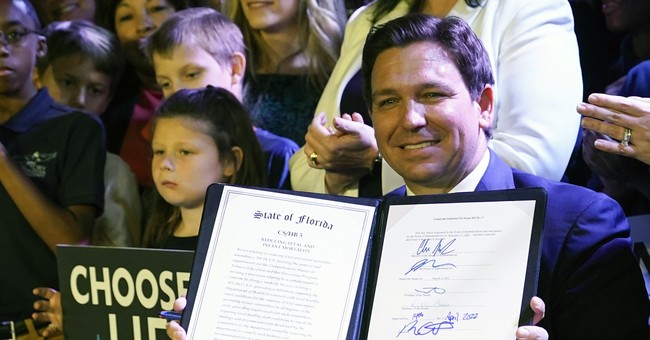 In April, I had the privilege of attending Florida Governor Ron DeSantis’s signing of first-in-the-nation legislation banning Critical Race Theory in public schools and employee training. Throughout Covid-19 lockdown insanity, Governor DeSantis led the way on evidence-based, commonsense policies in the best interest of Florida citizens. Now, with the signing of HB 7 and other strong and necessary laws, Governor DeSantis is once again demonstrating leadership that should inspire other governors and serve as the model for standing up to the woke agenda.

While California Governor Gavin Newsom is requiring a divisive “ethnic” studies program in order for California students to graduate from high school, DeSantis is standing up to the race-baiting bullies. As on race issues, Newsom and DeSantis could not be more different on their pandemic response. While DeSantis enacted commonsense measures that evolved as our knowledge of the virus changed, Newsom was infamously caught dining mask-less at a ritzy restaurant while citizens in his state were still under strict lockdown.

DeSantis signed HB 7, the Stop WOKE Act, which passed in the Florida House and Senate earlier this year, outlaws Critical Race Theory (CRT) in public school classrooms. The mainstream media has dishonestly portrayed HB 7 as a bill that suppresses the teaching of history. Nothing could be further from the truth. The purpose of outlawing CRT is to ensure that history is taught instead of warped ideology aimed at dividing students. HB 7 includes many new required components of African American history education and does not change the teaching of American history and world history that involve issues of race.

DeSantis explained at a press conference for the signing event, “We teach all of that because it’s real history, it’s important. We will not let people distort history to serve their current ideological goals.” What Floridians have rightly taken issue with are the CTR principles that undermine the legacy of American liberty and misrepresent historical events in order to segregate students and perpetuate racism.

Moms for America’s Aly Legge, an Army veteran and mother of five, explained at the press conference, “Critical race theory is racist at its core. Its main tenant is to rid racism with racism. It promotes segregation within the family and our nation.” Legge shared movingly about how her family was impacted by CRT in the classroom when a teacher told her son that he should reject his adoptive father for being white.

Like so many parents, Legge was stunned that a teacher, emboldened by the divisive tenets of CRT, would interfere in her family life. She said, “Their [teachers’] job is to teach reading, writing, science, and math. Everything else is up to me and their father, their parents.” Parents are the first teachers of their children, and they should know that schools do not have the right to undermine their God-given role.

At the press conference, Moms for America’s Quisha King also shared an example of CRT at work in her children’s school, which planned a segregated assembly. None of the administrators or teachers at the school stopped the racially discriminatory plan. King shared, “Parents said, ‘No more!’ and we ended that segregated assembly.”

King thanked Governor DeSantis for his leadership in putting an end to CRT in public schools. She said, “We do not want our children to be looked at through the lens of race. This is nonsense! We have taught our kids our values that say, ‘Don’t judge us by the color of our skin.’” Critics of the Stop WOKE Act have tried to say that CRT is not being taught in public schools, but we know that it is and many moms, just like Legge and King, have stories to prove it.

Banning CRT is a first step toward restoring American values. DeSantis said, “We’re also not going to teach that values such as merit, excellence, hard work, fairness, neutrality, objectivity, color-blindness are somehow racist or sexist. They are not.” This is the spirit of our Founding Fathers and the virtues necessary to maintain freedom.

DeSantis not only signed the first-in-the-nation Stop Woke Act but also signed legislation ending Disney’s special status in the state. Top executives at Disney jumped on the mainstream media bandwagon condemning commonsense legislation in Florida protecting young children from predatory sexual education in the classroom. Disney offended parents, the very people who decide whether their children watch Disney movies or not. Many of us are deciding not to.

DeSantis said, “We believe an important component of freedom in the state of Florida is the freedom from having oppressive ideologies imposed upon you without your consent, whether it be in the classroom or whether it be in the workplace.” These are not just words for Governor DeSantis; he has backed them up with action.

If you want to know why people are flocking to Florida and the economy is booming, this is it. Many Americans recognize that their freedoms are at stake in the current political environment. Moving to a state that recognizes and protects God-given rights and individual liberty is an easy decision. Newsom’s failed policies has Californians fleeing the state, yet many governors continue to follow the woke agenda.

As Quisha King said, “So many of us are searching for strong leadership these days.” DeSantis has been the leader that many Americans needed to look to in a time when it seems like basic facts are being called into question and the world is upside down. Other governors should consider DeSantis a model for patriotic, commonsense leadership. Its time states compete for freedom instead of tyranny.