Nope, They Really Do Want to 'Burn It All Down!'

Kevin McCullough
|
Posted: Jun 28, 2020 11:59 AM
Share   Tweet
The opinions expressed by columnists are their own and do not necessarily represent the views of Townhall.com. 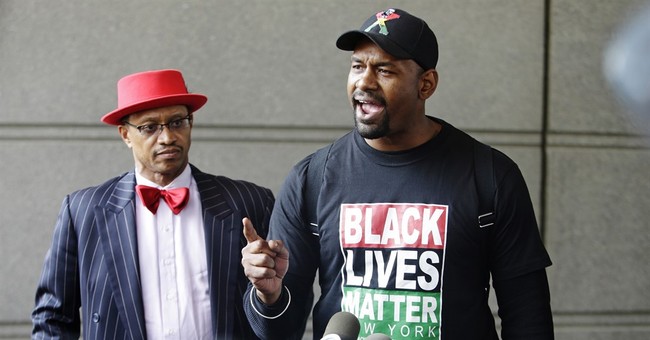 He wasn’t being figurative. He wasn’t being symbolic. When Hawk Newsome—the leader of Black Lives Matter in New York—said for America to give him what he wanted or that he would “burn it down,” even though he pretended otherwise, he was being literal.

We know this because he cited the use of violence in the immediate follow up to the statement. He falsely claimed that “the riots of the 60s” brought about the greatest expansion of wealthy black Americans in their history. He bragged at the firing of eight police officers. He attempted to connect needed social change as being somehow in opposition to the ideals of Dr. Martin Luther King Jr. He also evidently believes due process is anti-progress.

All of it spoken like an absolute anarchist, propped up by Marxist thought, and likely bought and paid for by left-wing funding.

So how is it all working out? It’s a fair question since it appears to be “working” according to his “plan.”

Let’s peek in on Minneapolis. With hundreds of millions in damage to many black-owned businesses, the city council voted to disband and radically defund the police department. Now, let me remind you, that it was a police department of nearly even representation of people of color and white officers. It was led by an African American commissioner. Nevertheless, it had to go. Now, after three weeks of total chaos, the same city council has voted to spend tax-monies on private security firms for themselves, just not the taxpayers.

Baltimore, the fourth most dangerous city, voted this week to slash $22 million from its policing efforts. They did this despite all of the pain and controversy it has faced in repeated controversies over the last several years.

Chicago, which takes great delight in priding itself on being one of the most anti-gun cities in America, has averaged dozens of shootings (sometimes per day) each week in the month since “defund” has become the mantra.

In New York, 18 victims were shot in only nine hours early this past Saturday, compared to only 14 being shot for the entire calendar week in 2019.

In New York, the buffoonish mayor eliminated the anti-crime unit (largely credited with eliminating much of the gun violence) as well as a large percentage of plainclothes cops that work neighborhoods in problem areas.

No problem though. The mayor is also seeing a 49 percent increase in uniformed officers now opting for retirement.

Hawk Newsome—while boasting how right it is to “burn it down”—also oddly interjected the announcement that Black Lives Matter will practice their “Second Amendment rights” in the pursuit of their demands.

My hunch is the cowardly mayors will bow to the angry mob again and look the other way on the firearms. But God help you if, as a law-abiding American citizen, you get stopped while Constitutionally carrying.

Hawk Newsome and Black Lives Matter have ceased to be about justice, equality, or fairness. They believe they have the right to smash your storefront in and blame you for it—all because it will “work.”

They are not serious about what is good for the black experience.

Since the murder of George Floyd there have literally been hundreds more black Americans shot. Almost exclusively, they’ve been shot by other black Americans.

The idea that Newsome was waxing poetic about symbolism when he claimed he would “burn it down” is laughable.

He’s angry. We get that. America was angry at the murder of George Floyd.

But this threat to America isn’t about Floyd. It’s about a Marxist takeover using anarchy as its choice for force.

The capitulation must stop. The violence must be put down.

They want to end America.