Is This What We Really Want? 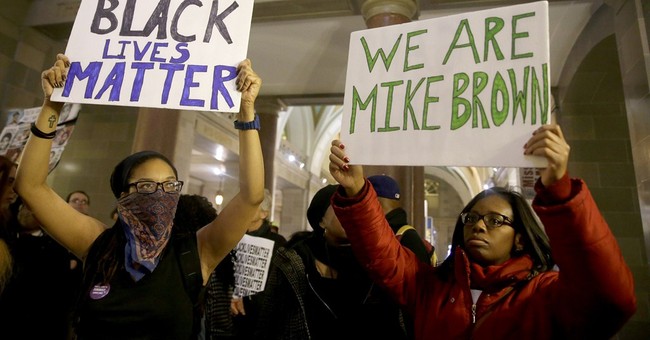 A simple question to those who protest the grand juries in the police related deaths of Michael Brown and Eric Garner, "What do you really want?"

I have been watching--at first from afar--as the protestors in Ferguson, Missouri burned their town to the ground--and I have a hard time determining the message of the protests.

Here in New York we handle protests so routinely, the turnout pretty much muted any national interest because the marches went off without any major property damage or fatalities related to the protests. Yes 200 people have been arrested, but to be candid, that's a smidgeon compared to political conventions, Yankee championships, or hosting the Super Bowl.

It has been some of the satellite protests in places wholly unconnected to Ferguson or Staten Island that caused me to think this week, "Are they/we getting what society truly needs from the protests?"

If Denver, Colorado was any measure my answer would be definitively, "No!"

A large gathering of high school students rebelliously walked out of classes this past Thursday, and unlawfully gathered outside the school to stage a protest that we believe was in support of the protestors from Ferguson. As they marched the city marshaled police to the site so as to not lose control of the crowd--seeing as how it was mostly peopled by underaged kids.

When four of the first police roll up on their bicycles, a car lost control and struck the four officers. All went to the hospital, but one was so badly injured he required six hours of surgery and as of the writing of this piece is still not out of critical condition. After the car struck the officers, a chant rose up from within the protesting kids, "hit him, hit him again!" (Focused on what witnesses believed to be the worst injured officer.)

The problem with many of the protests is the degree to which much of what they protest for is based on false information.

Though many have tried to turn these two cases into a pattern. They are so radically different in fact that there is really very little similar between the two.

Michael Brown more or less brought about his own death. Eric Garner did nothing of the sort. All of this according to the physical evidence, eye-witness testimony, and video taped footage from the individual crime scenes.

The prosecutor's role in each case also demonstrated a significant difference. In Missouri the prosecutor revealed maximum transparency in releasing all of the grand jury evidence to the public upon announcing the grand jury's findings. The prosecutor in New York gave the jurors a poor choice of crimes to charge with, was slow to release the evidence, and asked only for the lawful minimum to be released.

As protestors have looted, burned, and thieved in Ferguson, or merely stopped traffic, delayed public access, and interrupted normal police work in New York, confusion about why they march, what they hope to accomplish, and what their message is or should be abounds.

Hence it becomes very easy to believe that the goals in play are, "we hate the police, and we want the police out of our lives."

When protestors begin chanting, "Hit him, Hit him again" over the body of an officer that needs immediate care--in a city wholly disconnected to either of the events in question it would be prudent to ask what message is being understood.

In reality Eric Garner's tragedy is the true miscarriage of justice, that some self-appointed "civil-rights" agitators attempted to tell us that Michael Brown's case was.

But facts in all of the dialogue on these matters has been clouded intentionally by outside forces attempting to try to further limit lawful law enforcement from doing their jobs.

And that stopped me in my tracks this week when this question came to mind, "Do we really want law enforcement to feel further incapable of responding to unlawful activity in the toughest, most needed neighborhoods in America?"

Isn't the most unloving thing we could do to those most in need of justice, is to remove the elements that help justice be established--beginning with protecting the innocent of every block?

This week New York area mega-church pastor Dr. AR Bernard appeared with me to discuss all of this, and his simple observation was that the kids of any given community don't know the police who are securing their communities, and that perhaps old fashioned beat cops, building relationships with neighborhood kids would go a long way to preventing escalation in what tend to be seen as unnecessary escalation moments.

I think he's on to something.

If the protests could accomplish anything, my hope would be that it would bring people together. We need tighter knit communities. And it is increasingly difficult to pre-judge and hold bias against people you spend time and sometimes lifetimes getting to know.

Whatever the ideas, I don't think the solution to any of it lies in a cop being injured and then stood over in Denver with children of every race chanting, "Hit him, hit him again!"