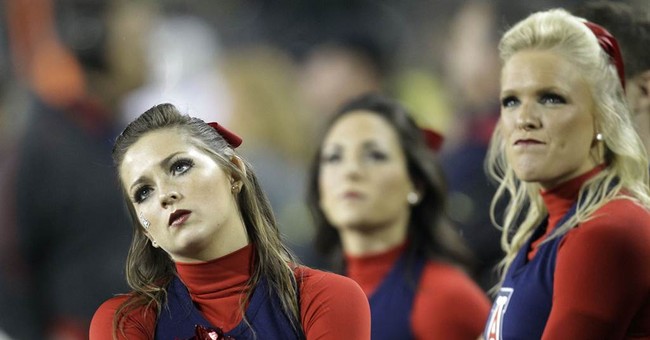 Welcome to all that is the fascist thinking of the leadership of the Kountze Independent School District, located just outside Beaumont, Texas.

Similar to the scandals occupying Washington DC right now there is a "big picture" lesson in the story of the Kountze High School cheerleaders: "If the atheist left of America have enough tax-payer money at hand, they will continue to attempt to wipe out individual freedoms of all those they disagree with."

Now admittedly the Kountze Independent School District doesn't have 88 low level IRS agents it can assign to track the movements of the cheerleaders. It doesn't have the ability to lie to both a judge and in return a sworn hearing in Congress about the need for wiretaps against the cheerleaders and their parents. It certainly doesn't maintain the executive branch ability to first ignore, but in the long run--very likely commute the sentence of the chief wrong doers in the matter.

But those three contrasts aside the Kountze Independent School District is seeking retribution against those it dislikes the worldview, belief system, philosophy, and possibly the politics of just as sinisterly, and just a punishingly to the American tax-payer as the "big boys" in our nation's capital.

On May 8th the Texas courts said that the Kountze cheerleaders could put Bible verses, quotes, and references on the banners they created for their football boys to come running through. The court weighed in on this only because the school district and some in its leadership felt it unacceptable that these cheerleaders be allowed to hold and state their religious beliefs while offering messages of support to their spirit brothers on the football field.

With the constitution protected and the school district sent packing, normal people were satisfied--even thankful--that some miniature tyrant--cleverly disguised as a concerned school board member, superintendent, or principal--would not be allowed to infringe upon the public expression of religious belief by these cheerleaders.

That is until this past Wednesday--weeks after receiving the judicial spanking they deserved--the school district quietly filed papers for an appeals trial. This time the district is suing the cheerleaders for the absolute permission of the court to censor, silence, and manipulate the cheerleaders free expression of their constitutionally protected religious beliefs.

In its initial query before the court, some concerned tax-payers may have given the school district the benefit of the doubt, perhaps in the overly educated minds of those on the school board the simple truth of the first amendment seemed too lofty an idea to understand on their own and thus a judge's ruling was necessary to help the overly educated school district to clearly comprehend their limits in the matter.

In this new endeavor they will now dig into tax-payer funds, hire council, elongate arguments, all for the hopes--just hopes--of settling some score with cheerleaders who wanted to do nothing more than give solid support to the football team they stand in service and loyalty to.

The cognitive dissonance of those on the left is an impairment of a unique variety.

Like the scandals in Washington DC that demonstrate unchecked power run amok. The school board for Kountze Independent School District understands little of objective reality.

They think to themselves that the court "can't" be right, because that would mean that they (the school district) were wrong.

Meanwhile your tax dollars and mine (thanks to No Child Left Behind) are now linked to a form of oppression against these innocent, smiling cheerleaders who only wish to be supportive of their community, their classmates, and their team.

The reality that this could happen to my kids and the stunning callousness these "educators" are exhibiting in their efforts to injure these girls is breathtaking.

So for those reasons and more, I dialed: (409) 246-3474, and left a kind but assertive message with the school's office of my feelings on the matter.

Bullies are ugly at any age, but the ones that come from the left seem to have no bearing on just how unbearable they truly are.

So why not help adjust their sense of understanding... just remember... be I'm encouraging you to be kind!