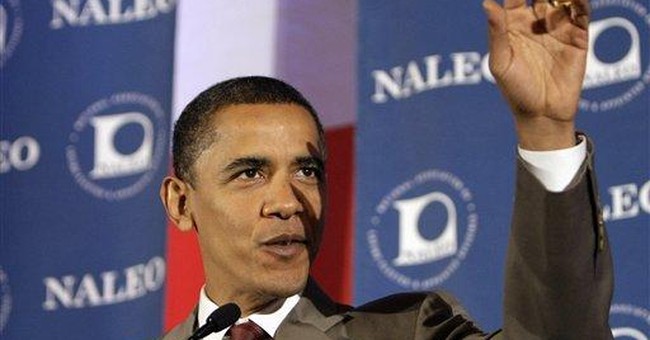 When Barack Obama took his message of condoms to Rick Warren's pulpit at Saddleback Church he knew at the time that he was about to advance deceit to the gullible congregation and get away with it. When Rick Warren allowed him to do so in 2006, he became complicit in that lie.

As this correspondent warned before it happened, Obama would be the victor (because of the concept of "implied endorsement") and Warren's congregation, the American people, and those who faced the threat of HIV/AIDS would be the ones to suffer. How I wish I had been wrong!
I have a pretty decent record of predictions with Senator Obama, even Rush Limbaugh was kind enough to point it out.
Yet Obama is wrong on the Gospel of Condoms. For all the "Praise Jesus" and "Yes Lords" he may utter, his understanding of sexual advocacy, mental processing, emotional awareness, and most importantly adaptive behavior, run 100% in total contrary dispute to Biblical truth.
CARTOONS | Gary Varvel
View Cartoon
So does his lead attack dog in the United States House of Representatives - Henry Waxman. For the last seven years Congressman Waxman has annually held up funding for abstinence - claiming it didn't work. Of course logical people everywhere are still scratching their heads at that one, because it is 100% scientifically provable that abstinence - when practiced is always 100% reliable.
So why does Waxman carry on so?
Because Obama is his savior? He worships at the altar of indulgence? And is a disciple in the Gospel of Condoms?
The only problem is - abstinence is the truth, condoms are the lie, and anyone who asserts otherwise has two new critics: Centers for Disease Control and the World Health Organization.
Two stories emerging within the last few weeks demonstrate that not only has the HIV/AIDS pandemic been misrepresented - and far too overhyped, but they also point to the reality that it is behavior that MUST be changed for the lives of young people to improve.
In what even they admitted was a story that should have been released far sooner, the World Health Organization admitted that outside of the section of Africa where the Gospel of Condoms has been preached heavily by Obama and his ilk - there would be no forthcoming world pandemic of HIV/AIDS. Social scientists had noticed that the trends were leading this direction for several years but the pressure finally caught up to the WHO, who finally told the truth. One spot where even in Africa AIDS is not expected to turn pandemic... Uganda - a nation that heavily adopted abstinence programs, educated their people, and saw dramatic results.
To my mind the much more disturbing story was released this last week dealing with the issue of the surge in HIV cases in America. Ironically enough - behavior and control of one's choices are key to the surge as the headlined blared out: HIV Resurges in Men who have sex with Men. Wow, what a sad case of, "Duh!"
This has been true since we first began seeing AIDS cases develop. Elected officials should have called for quarantine for the public good, forced those who were diagnosed early on to notify past partners, and a whole bunch of other common sense steps. Normal steps that had been our previous policy as it related to communicable diseases were all ignored.
Why? Because of the fear of the politician to mention that some sorts of behavior might not be very good for them. Yet regardless of the history lesson liberals, in particular, never learn. Thus... Messiah Obama and the Gospel of Condoms.
Obama could have stood in Rick Warren's pulpit and proclaimed that sex is a function that God designed for those in lifelong marriage. In doing so he certainly would have been biblical in his position - but it would have ticked off every gay activist that as of this week has now pledged money, grassroots support, and votes.
The sad thing is that in the CDC's analysis they casually mention that the age group of "man" that is most at risk presently in the HIV surge are black boys 13-24 years of age.
13 years of age?
Why are HIV infected adult males raping 13 year old boys? Why are they getting away with it? Why aren't even the most compassionate in the radical homosexual activist ranks condemning the actions?
Is it perhaps because Obama's message, like the social liberals he looks up to who preceded him, is merely, "make sure you use a condom!"
Without authentic discussion about the choices we make in life, without quality advice about the moral, physical, emotional and mental health consequences we will suffer as a result of our choices, children are literally being raped to death.
Barack Obama believes in the Gospel of Condoms. But it is a false gospel - one that exchanges death for a few fleeting seconds of impulse.
And not very attractive ones at that.
These Are the Republicans Who Voted to Confirm Merrick Garland
Spencer Brown
What Mitch McConnell Said About the FBI's Raid on Mar-a-Lago Is Quite Disappointing
Matt Vespa