They Never Say "Tax the Successful" 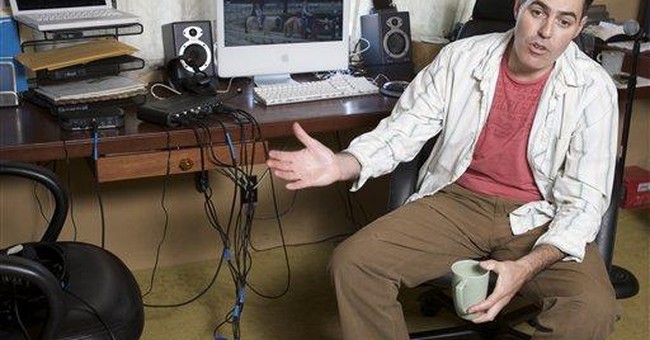 Trending
Comedian Adam Carolla has never been one to censor what comes out of his mouth. The gift of gab took him from humble beginnings in economically destitute North Hollywood to dizzying heights inthe entertainment industry, where he could afford to move a few miles away.

It's a story of hard work and success that comes through in his recent book Not Taco Bell Material, a chaotic tour that takes readers from Carolla's early years to how he finally found his calling - and his success.

Carolla's disdain for the politically-correct culture of sensitivity has made him an unlikely but powerful critic of the progressive watering-down of American culture. His first book, In Fifty Years We'll All Be Chicks, was an ode to an era of manliness lost to decades of gender-neutral education. And in recent years, he's lamented the loss of a society that takes responsibility for its actions.

"I made my own luck," Carolla tells Townhall. "I'm the guy who was rejected from Taco Bell," he says, referring his failed application to the fast-food restaurant in his youth that inspired the book's title. "Would you think that guy was born with a four-leaf clover or a rabbit's foot up his butt?"

Thematically, Not Taco Bell Material could be summed up in four words: hard work pays off. It's a mantra espoused by Carolla, from his well-publicized criticisms of the Occupy Wall Street movement to recent comments about the deplorable class warfare deployed by Democrats. "They always say tax 'the rich.'" Carolla says. "Who's 'the rich'? I'm not rich. I'm successful. They never say 'tax the hard-working' or 'tax the successful.' They say 'the rich' because it's easier to deal with their inability to be successful by attributing others' success to luck."

Despite his criticism of the mentality of big-government progressives, Carolla insists his fellow entertainment-industry workers mean well. "Others in Hollywood are very humble. And they say, you know 'I'm very lucky and there are a lot of good actors out of work.' They all know, however, that they worked their tail off to get where they are."

Disdain for the entitlement society has become one of Carolla's distinctions after a rant about Occupy Wall Street went viral last year. "Self-entitled monsters," he called some of the protesters, who "think the world owes them a living."

"It's this envy and shame, and there's gonna be a lot more of it," he said. "Everybody's a winner, there are no losers."

Carolla's own humility comes from his connection with his roots. His retelling of the life story - crazy stories and all - is aided by the fact that he's constantly reminded of it.

"I never left Los Angeles... I probably live three miles from where all those antics took place. I drive past them on an almost-daily basis, which is sort of weird." And despite the adolescent ballbusting and trouble he and his friends got up to, he's stayed true. "I'm happy to say that most all those guys I'm still on great terms with."

Watch Carolla on the O'Reilly Factor last week discussing why he thinks the Left goes after hard workers: