Kerri Toloczko
|
Posted: Sep 17, 2019 12:01 AM
Share   Tweet
The opinions expressed by columnists are their own and do not necessarily represent the views of Townhall.com. 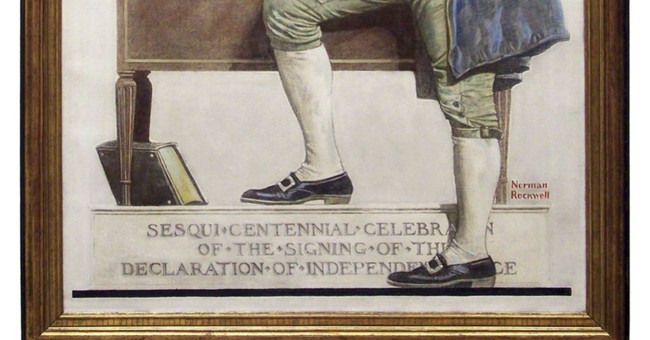 Source: Profiles in History via AP

A natural statesman and ambassador, Franklin was also a prolific inventor and brilliant observer of freedom and human nature. If Washington was the father general, and Madison the father architect, Franklin was the founding sage.

Franklin was fascinated by technology and communication, and determined to ensure our government would never limit first freedoms such as speech and religious expression. It is fun to imagine Benjamin Franklin time traveling to 2019 and delighting in cars, planes and cell phones.

He would be shocked to learn, however, that the largest threat to liberty isn’t just from government, but from private companies like Google, Instagram, Facebook and Twitter as they try to leverage the government of the people for their own ideology and information-suppressing ends.

Ironically, “Googling,” reveals myriad examples of these self-appointed speech authoritarians controlling which posts they consider appropriate, and blocking speech they don’t, by willfully taking action to block, ban or censure. In the overwhelming majority of cases, the censored party has conservative or Republican leanings.

The law covering censorship of social media users can be murky, although the principle is not. First Amendment protections apply to the government restricting speech, assembly and worship but do not automatically apply to private businesses.

At the heart of the debate is whether online speech meets the Supreme Court definition of the “public square” in part established by the 1946 Marsh v. Alabama case that determined if a property owner provides space for public use, then speech in that public space must be uncensored. Social media companies are provoking a Marsh challenge lawsuit with their oppressive actions.

The public square is where America meets. It’s not just a village green or a room, but any space, physical or virtual, available to share divergent—and even unpleasant—words, ideas and political debate.

In 2017, a rogue Twitter employee deleted the account of the President of the United States. Corporate Twitter shut down accounts of pro-life advocacy organizations and activists.

Last year Facebook blocked conservative African American activists Diamond and Silk, telling them “your content and brand (is) unsafe to the community (and) not appeal-able in any way.” This year many Instagram users complained they were blocked from liking posts or being connected to conservative activists and the Republican president.

It seems each of these ostensibly open forums could legitimately include duct tape and a blindfold in its logo.

In recent congressional testimony, Facebook CEO Mark Zuckerberg called for censorship of “political actors” and “an active role for government and regulators” as arbiters of which speech they consider acceptable. In Europe last Spring, Zuckerberg stated “(acceptable speech) needs to be defined by thoughtful governments.” Zuckerberg seems to be the chief oracle for his sector’s Internet thought police and oppressive government’s worst inclinations.

Abridging speech is not just an insult to the Constitution, but the first step toward institutional fascism—not the pejorative false fascism accusations the left regularly throws at the right—but the true confluence of oppressive government and tyrannical private sector actors that form the basis of this cruel ideology.

The Founders feared government would try to limit free speech but could not foresee that businesses could also be powerful enough to banish people from the public square with ease. But they gave us the tools to protect our liberty against 21st century tech giants trying to leverage government to satisfy their quest for private censorship.

Traditional media giant William Randolph Hearst, king of America’s news, gave Constitution Day its beginning as “I am American Day” in the 1930s. In 2005, Congress designated September 17—the date this glorious document of freedom was signed—as Constitution Day. On its birthday and every other day of the year, we must protect the Constitution that protects us. We are the Internet; we are the government and we are all in the public square together.

Franklin recognized the danger of suppressing speech, and in 1737, used the paper and ink in his public square to share why this will always matter so dearly to our liberty: “Freedom of speech is a principal pillar of a free government; when this support is taken away, tyranny is erected on its ruins.”