Vive La France: It's About the Children 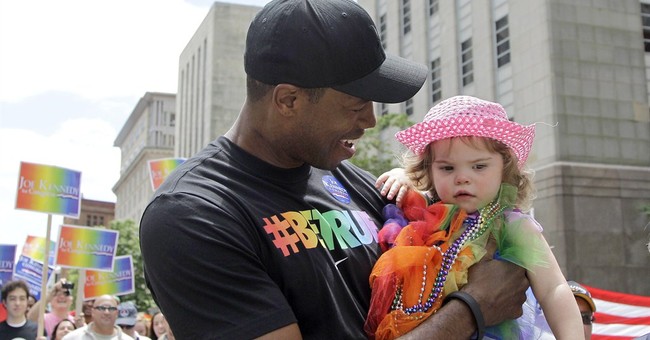 When we gaze across the pond at our European cousins, the general assumption is that we're looking at our future. From food and fashion to politics and culture, Europe is on the cutting edge – the avant garde. Depending on your ideological sympathies, this is either seen as a good thing or a bad thing. Conservatives see Europe's shrinking families, Socialist governments, and empty churches and shudder to think America is on the same track. Progressives swoon at the idea of America evolving towards a progressive, multicultural, global-minded future.

One would assume, then, that when it comes to hot button social issues like abortion and gay marriage, Europeans would be of one mind – the Progressive mind. But assumptions, as we well know, are often wrong. Turns out, most European countries restrict abortion to the first three months of pregnancy, and reflection periods, counseling on alternatives to abortion, and evaluation by multiple physicians are often required. On the question of same-sex marriage, opposition is cropping up in unlikely places. Despite their reputation for a laissez-faire approach to life, there is a growing movement in France dedicated to preserving the traditional definition of marriage – a movement that encompasses every stripe of citizen, from Catholic clergy to atheist gays and everyone in between.

Writing for "Public Discourse," author Robert Oscar Lopez (raised in a same-sex household and a self-identified bisexual), has been tracking the French response to the LGBT movement for several months. He challenges Americans to learn from their example:

"Since the late 1990s, France has offered same-sex couples 'PACs' or civil unions, so the issue of lovers living together is not the powder keg. Though still mostly (if nominally) Catholic, the French are by and large willing to stay out of the bedrooms of people who love one another, irrespective of sex.

Such live-and-let-live philosophy does not apply when the citizens see a threat to the nation's children. Here is where Americans must follow their playbook closely, because it is probably the surest way to break the stalemate in the United States about marriage and the Fourteenth Amendment.

In France, a repeating refrain is 'the rights of children trump the right to children.' It is a pithy but forceful philosophical claim, uttered in voices ranging from gay mayor 'Jean-Marc' to auteur Jean-Dominique Bunel, who revealed in Le Figaro that two lesbians raised him. For most of France, LGBT rights cross the line when they mean that same-sex couples have a 'right' to children—something that both France's grand rabbi, Gilles Bernheim, and Louis-Georges Barret, Vice President of the Christian Democratic Party, have refuted as a right at all.

The right to a child, according to Bernheim and Barret, does not exist; it would mean changing children, as Bernheim says, from 'child as subject' to 'child as object.'"

For years, the LGBT movement has invoked the twin spectres of equality and human rights in their war against traditional marriage. Defenders of the "one man, one woman" model for marriage have been slandered as hateful bigots who would relegate same-sex couples to second-class status. We've been told that the "march towards marriage equality" is inevitable, that we're on the "wrong side of history." We've been told that the embrace of alternative relationship models is the way of the future. As society continues to "progress" towards greater equality and enlightenment, more and more people will recognize that traditional notions of gender and sex are stifling and archaic. Increasingly, it's being asserted that opposition to this view constitutes a danger to society that must be eliminated through force of law. Freedom of speech and religion are being threatened in the name of tolerance and equality. If the LGBT agenda is successful, defenders of traditional marriage will be hamstrung in their efforts by the threat of legal prosecution and the certainty of social ostracism.

In the face of such vitriol, traditionalists have struggled to find a coherent, compassionate, and compelling response. We've allowed the histrionics of hyperbole and red herring tactics to distract and disorient us. In France, there is no such confusion. Defenders of traditional marriage are very clear about why the institution must remain as it's always been: it's about the children.

To frame the debate in these terms requires a radical shift in the terms of the argument. Currently, ideas of self-determination guide the discussion. Individuals should have a right to marry whomever they choose. Everyone should have a right to the legal benefits of marriage, whether they marry a person of the same sex or the opposite. Same-sex couples that want children should have full access to the resources necessary to procuring them, whether through adoption or artificial means of conception.

The French recognize that this obsession with "me, myself, and I" comes at the cost of the greater good. This is a conversation few in America know how to have. We are the world's greatest champions of individualism and self-determination. We're so used to thinking in terms of individual rights and private property that we tend to apply these principles indiscriminately. Notions of "the common good" strike the American ear as suspiciously socialistic. We must remember, however, that our pursuit of life, liberty, and happiness must never infringe upon the rights of others, and from this principle flows an irrefutable fact: Having a mother and a father is a basic human right, one in accordance with Nature and Nature's God. To infringe upon this for selfish gain or gratification is an affront to natural law and to the Constitution.

With this as our starting point, American defenders of traditional marriage are equipped with a strong foundation from which to frame our arguments. We have history, tradition, the common good, natural law, God's law, and human rights on our side. Our opponents have myopic sentimentalism and a perverted understanding of justice on theirs.

Let us, then, draw inspiration from our enlightened cousins across the sea and stake a bold claim for the cause of traditional marriage and family. Heaven help us and our ancestors if we cede this most critical issue to single-minded ideologues that care only about their own desires and nothing for the welfare of children and the legacy of mankind.

Dallas Paper Tries a Dunk on Ted Cruz, He Turns the Tables by Using Their Own Words Against Them
Redstate
Time to get rid of Ilhan Omar “for integrity and progress,” says … the Star Tribune editorial board?
Hotair