Ken Blackwell
|
Posted: Nov 02, 2020 12:01 AM
Share   Tweet
The opinions expressed by columnists are their own and do not necessarily represent the views of Townhall.com. 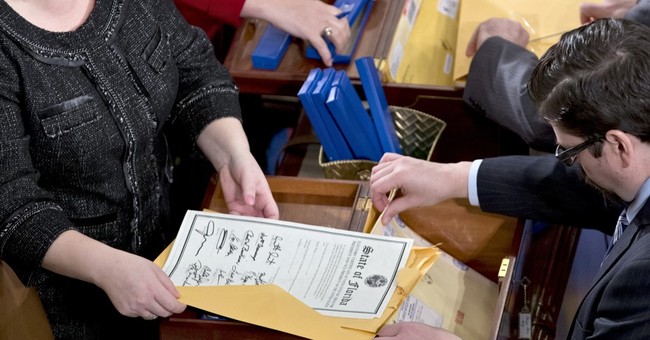 Both Democrats and Republicans fear that fraud and dishonesty can tip the scales against them. These practices often impact local races; however, President Trump’s bipartisan Election Integrity Commission, which I served on from 2017-2018, concluded that a tyranny of the majority or extant voter fraud has yet to swing a presidential election. By and large, we have bipartisan vigilance and the Electoral College System to thank for the viability of our Constitutional Republic.

Unlike local races, presidential elections and the Electoral College are decentralized. They're comprised of 51 smaller elections adjoined into one, with local, state, and federal checks on accountability.

That doesn’t mean fraud doesn’t ever occur. It’s real, it happens in all 50 states, and it’s something we must take seriously — especially when considering that, in 2016, a 40,000 or less margin determined the outcome of three key swing states. Lawmakers need to take extra steps to crack down on fraud, particularly in problem states like California and Pennsylvania. But in any potential periods of uncertainty — particularly in this absentee ballot-heavy election — we should show patience and confidence that the current system will work. Rather than labeling the Electoral College as bad, we should devote our energy to quickly rooting out the fraud while holding our election officials and representatives to a high standard of transparency.

For example, the State of Ohio has a whole host of election administration laws that its election officials must follow. As the former Secretary of State from 1999 to 2007, I know firsthand that the process for adhering to them is not for the faint of heart.

Both sides predict which states may have close races months in advance and swarm those states with lawyers and poll watchers. We saw this in Ohio in 2004 when I served as Secretary of State. Although the margin between the two sides came down to roughly two percent, the transparency precautions taken by both political parties made Ohio perhaps the most difficult state to commit fraud in overall.

Some accept this premise but believe that this election could be different given the extent of unrequested mail and absentee voting. These developments are stressing chain of custody and verification safeguards.

It’s true: Problems and errors have indeed happened. But the speed with which local officials have addressed these issues should give us confidence, not doubt. For example, in Franklin County, Ohio, nearly 50,000 prospective absentee ballots went to the wrong voters. The bipartisan Board of Election saw the error early on and appears to have taken every step needed to rectify it in time. Many other comparable examples around the country have received equally quick rectification from those on the ground.

That said, no one is perfect, and on November 3, the stakes couldn’t be higher. We must ensure that every valid vote is counted and that only valid votes are counted. All instances of fraud should receive severe and swift addressing. Over the long term, we should also embrace proposals to improve upon our local election processes. Let’s have these conversations rather than questioning the legitimacy of the Electoral College and the outcomes it produces.

The American electoral system has stood the test of time. It’s withstood civil wars, world wars, and a decade-long depression, with few questioning its legitimacy.

Let’s be careful with our words in the coming days as we watch the Electoral College allow America to conduct another successful national election that is the envy of the world. The system is the gold standard and the model of a free society.

Ken Blackwell, a distinguished fellow at the Family Research Council, is on the Action Board of the American Constitutional Rights Union.