Mr. President, Mr. Secretary: It is Genocide. Say so!

Ken Blackwell
|
Posted: Mar 07, 2016 12:01 AM
Share   Tweet
The opinions expressed by columnists are their own and do not necessarily represent the views of Townhall.com. 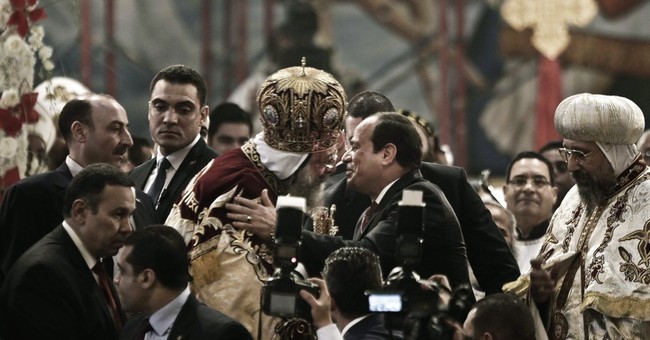 Editor's note: This column was co-authored by Bob Morrison, who served in the Reagan administration.

President Obama and Secretary of State John Kerry have until March 17th to issue a determination that ISIS’ attacks on Christians in the Mideast are genocide. Time is running out. The foot-dragging and hesitancy of this administration in calling it genocide is inexplicable. Why do they have to be prodded to do what is right?
All of us have seen the horrific images of 21 Coptic Christians lined up on a North African beach and beheaded. These Egyptian martyrs died with the name of Jesus on their lips. These murders, rapes, arsons, and kidnappings are taking place daily in regions where ISIS has extended its bloodstained reach.
We see as well the destruction of homes, schools, and churches. Christians and other religious minorities are given the choice of conversion to Islam, paying extortionate sums (called jizya) to their persecutors, or fleeing.
These are no “choices” at all. They are all violations of all internationally recognized human rights. Each act of ISIS violence further diminishes the moral weight of the UN’s Universal Declaration of Human Rights. The United States, and especially the impassioned advocacy of our chief delegate Eleanor Roosevelt, played a crucial role in the adoption of this historic document. We Americans are invested in this appeal to the conscience of the world.
CARTOONS | Gary Varvel
View Cartoon
For this reason the Knights of Columbus and In Defense of Christians have teamed up to build awareness of these atrocities against Christians in the Middle East.  This powerful ad is now airing on the national news and the groups are urging folks to sign this petition to the State Department to end the genocide.
Mrs. Roosevelt and her colleagues knew that the crimes against humanity openly perpetrated by the Nazis and the Japanese imperialists led the world into the greatest conflict it has ever seen. World War II may have begun with the German attack on Poland in 1939, but the stage for this horror had been set for decades.
Vienna’s Christoph Cardinal Schönborn has pointed to the list of Christian communities that were severed from the body of the church by the swords of Islamic conquest in the eighth and ninth centuries, and he says this bloody tide is being exceeded in our own time. No persecution of Christians in history was more extensive than what we are seeing today. Undeniable reports tell of the sexual enslavement and even “a theology of rape” which ISIS uses to justify its depravity.
This backpedaling by our State Department is especially shameful given America’s great history of advocacy for religious freedom and human rights. Thomas Jefferson and James Madison collaborated to pass the epochal Virginia Statute for Religious Freedom in 1786. Madison sent news from Richmond to his dear friend Jefferson in Paris. Madison said passage of this historic charter would add to the “lustre of our country.” Jefferson had the Statute translated and circulated throughout Europe. They had “a decent respect for the opinion of mankind.”
Abraham Lincoln, too, was deeply concerned about America’s standing in the world. In issuing his Emancipation Proclamation, the president appealed to “the considerate judgment of mankind and the gracious favor of Almighty God.”
Lincoln knew that when America stood tall for human freedom and dignity, we were stronger. From the day he issued his proclamation, the threat of European intervention against the Union in favor of the rebels ceased. Lincoln believed that right makes might. And he defended the right with all his might.
Standing for justice has always made America stronger. Dr. Martin Luther King was awarded the Nobel Prize for Peace for his great work in civil rights. He knew, too, that “the arc of the moral universe is long but it bends toward justice.”
It is a poignant note that the day appointed as the deadline for declaring ISIS’ crimes against humanity to be genocide falls on March 17th. That is Saint Patrick’s Day. This English-born Christian evangelist led the effort to convert the Irish. His blessed memory is noted not least because Ireland was brought into the faith with no violence.
Failure to declare ISIS depredations genocide makes America look weak and indecisive. What can justify this unconscionable delay?
Mr. President, Mr. Secretary: You must consider your own place in history. We have only a few days to see that arc bend toward justice on those bloodstained sands, in those subjugated villages, in those fire-blackened churches.
Delay no longer: Declare ISIS’ jihadist rule to be genocide.