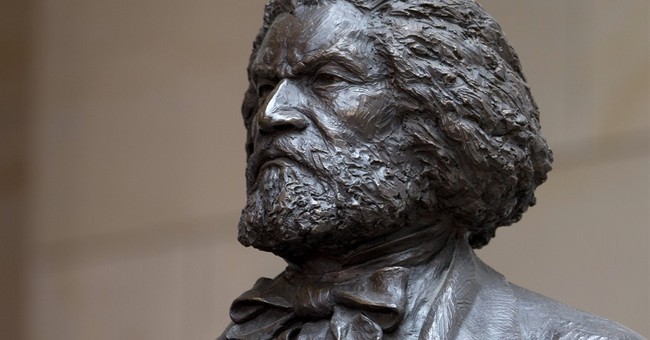 In Washington, D.C., one of our most stately buildings is undergoing an extensive renovation. The Free Public Library, Northeast Branch is probably the library closest to Capitol Hill. And this red brick structure, with its stylish quoined corners, when it reopens, promises to bring even more opportunities for study and reflection to this thriving community.

We would like to suggest renaming this library after Frederick Douglass. Frederick Douglass was, with Abraham Lincoln, the greatest example of what nineteenth century Americans meant when they defended “the right to rise.” Millions of Americans, native born and immigrant, free-born and emancipated slaves, committed themselves to self-government and self-improvement.

They recognized that knowledge is power. They sought to improve their minds in order to improve their country. We saw hundreds of colleges founded in the nineteenth century, including the first colleges for women and black Americans. We saw the vast expansion of the public library system, many the gift of philanthropist Andrew Carnegie. We saw lecture series—like the famed Chautauqua Circuit—dedicated to informing and equipping the citizens of the world’s greatest republic.

Abraham Lincoln traveled the lecture circuit with his address on inventions and discoveries. He honed his research and oratorical skills in preparing and delivering this lecture. He knew something of invention. He is still the only president to hold a patent.

Frederick Douglass was born into slavery on Maryland’s Eastern Shore. Loaned out to Baltimore relatives of his owner, he came in contact with young white boys. He pleaded with them to help him read.

It was in Baltimore that young Frederick Bailey—his birth name—first learned the power of literacy. His master’s kindly wife, Sophia Auld, was secretly teaching the bright young slave how to read. Frederick quickly picked up the rudiments of the alphabet. When her husband Hugh Auld discovered this, however, he became enraged.

“Learning would spoil the best n----- in the world,” Hugh Auld shouted. Mr. Auld went on scolding his wife, telling her that there would be no holding Frederick if he learned to read. A slave should know nothing but to obey his Master, Hugh Auld roared.

As Frederick Douglass would write in his still powerful Narrative of the Life of Frederick Douglass, that lesson in racism and oppression was not lost on the intelligent lad. He saw instantly how learning would bring him freedom. He did not for an instant think that literacy would mark him for “acting white.” He began, secretly, preparing himself for his flight to freedom.

There would be, of course, many dangers in escaping slavery. How much better he would fare as a passenger on that Underground Railroad if he could read all the signs along the way.

Frederick Douglass pored over The Columbian Orator and became one of the greatest platform speakers in American history. He met President Lincoln in the White House several times and cooperated with the Great Emancipator in many efforts to bring freedom to the slave. He certainly agreed with Lincoln’s proposition, as eloquently stated in his State of the Union Message to Congress of December, 1862:

In giving freedom to the slave, we assure freedom to the free—honorable alike in what we give, and what we preserve. We shall nobly save, or meanly lose, the last best hope of earth. Other means may succeed; this could not fail. The way is plain, peaceful, generous, just – a way which if followed, the world will forever applaud and God must foverver bless.

As the president explains here, freedom for the slave was necessary to maintain freedom for the free. Surely, Frederick Douglass was the great leader of his people. He was, as some of his white admirers called him, a powerful African prince. But he was also fully American. He had the courage to fight and subdue a “slave breaker” in his youth and the vigor to fight off pro-slavery mobs in middle age. Frederick Douglass was in a very real sense an action hero.

He was born in a dirt floor slave cabin in Maryland’s Talbot County. He died at Cedar Hill, his stately Victorian mansion in the nation’s capital. There are few stories of our history as inspiring as that of Frederick Douglass. And his passion for learning can be an example for today’s young people of all races and creeds.