Where Lawlessness Comes From 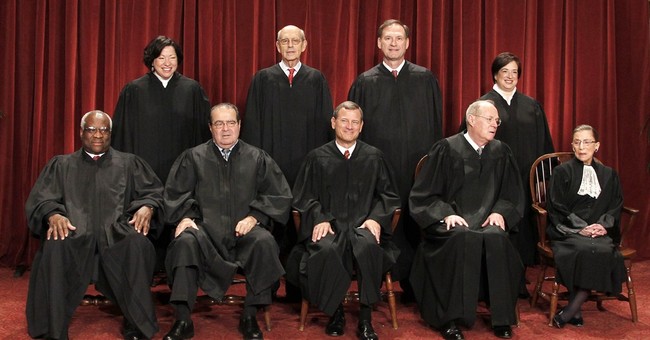 Former Education Sec. Bill Bennett said the most important thing about a school was its ethos. He meant the prevailing character of the school as an institution. That word also applies to the Obama administration, or any administration.

We should not, therefore, be surprised by the IRS scandal. It was completely predictable. It is one of the inevitable consequences of contempt for law. President Obama gave lawlessness a spur in this State of the Union Address in 2010. This was the ethos of his administration-

Mr. Obama had promised in his 2008 campaign to “fundamentally transform the United States” and he kept that promise in 2010 when he used this most august, most formal occasion of our republic to deliver a blistering denunciation of the Supreme Court’s ruling in the controversial case of Citizens United v. Federal Election Commission.

The black-robed Justices were seated before him as he tongue-lashed them. They had been invited as honored guests. But Mr. Obama wanted them there as props. He wanted to show the world that he was master in our house.

Chief Justice John Roberts saw the danger to our institutions from this unprecedented act of disrespect:

The image of having the members of one branch of government standing up, literally surrounding the Supreme Court, cheering and hollering while the court, according the requirements of protocol, has to sit there, expressionless, I think, is very troubling.

And it does cause you to think whether or not it makes sense for us to be there. This -- to the extent the State of the Union has degenerated into a political pep rally, I'm not sure why we're there.

“Very troubling,” indeed. And it was there that President Obama opened the gates to the IRS abuse of power. He showed his contempt for all previous practice, for two hundred thirty years of constitutional government in that assault on the Supreme Court. During the campaign, he had egged on his supporters, telling them to “get in their faces.” The night of his 2010 State of the Union Address, Barack Obama got in their faces.

We can hear our liberal friends object: “You conservatives howl about Supreme Court rulings you don’t like. Your crocodile tears now are hypocritical.”

That counter criticism deserves an answer. We do, indeed, vociferously denounce Supreme Court rulings that are incorrect, unjust, and cruel. We would put Roe v. Wade, which has brought about 55,000,000 deaths,at the head of our list. But we know how to conduct our opposition.

Even when his strongest convictions were offended by what the Court had done, even when he viewed the matter at hand as vital to the life of the nation, Ronald Reagan treated our courts with the highest respect.

President Reagan knew that if he fostered disrespect for law and for our free institutions of government, he would sow the wind. He did not want us Americans to reap the whirlwind.

Not so, President Obama. His arrogant and offensive behavior toward the Supreme Court of the United States on that grim, dark evening of January 27, 2010 was the opening gun in the race to crush his opponents.

It was not a great stretch for middle level bureaucrats at IRS to see that they would please this president if they made life miserable for his opponents. And they did.

Rather than the elected Chief Magistrate of a free people, President Obama acted that night more like an angry monarch lashing out. The story of King Henry II of England is useful here. King Henry was outraged that Thomas Beckett, his handpicked Archbishop of Canterbury, was defying him on the selection of priests and bishops. The king loudly denounced the Archbishop in his own circle. Over a late night dinner, the king cried out: “Will no one rid me of this meddlesome priest?”

King Henry’s barons gathered around his table took the hint. They entered Canterbury Cathedral and cut down Thomas Beckett, killing him as he stood at the altar of God.

No one believes that President Obama countenances anything as dire as that. But it is the Obama Ethos we need to consider when we look into the IRS’s abuses of power in the suppressing Obama’s political opposition.

That speech to the nation in 2010 showed that President Obama was willing to trash our history and our institutions. He didn’t ask his cohorts to rid him of any meddlesome priests. But the IRS did go after the Billy Graham Evangelistic Association. The time to stop abuse of power is before it comes to this point.