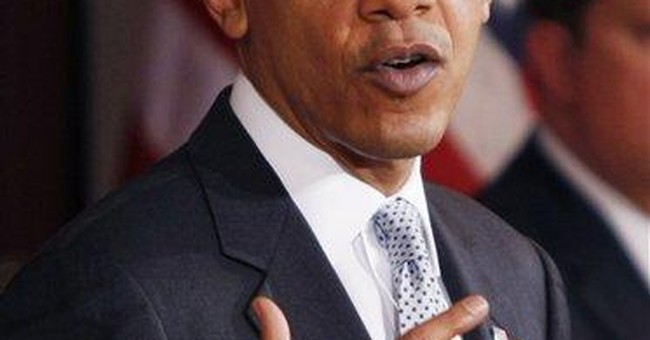 President Barack Obama recently rolled out a curious foreign policy. This policy leaves American troops carrying all the risks in overseas combat, while lowering our defenses at the same time dangerous regimes are developing their means of mass destruction. It also subjects American companies to foreign control, as European leaders speak about a new, secular global order no longer led by the United States. President Obama is sacrificing our sovereignty and safety in an increasingly perilous world.

North Korea showed the world exactly what that totalitarian regime thinks of U.N. resolutions and international opinion when it defied both in launching an intercontinental ballistic missile (ICBM) over Japan into the Pacific Ocean. Some call this launch a failure because it didn't achieve its stated goal of putting a satellite into orbit. That's ridiculous, because North Korea's true goal had nothing to do with satellites. It was to test its new ICBM design and to see whether American and international warnings were toothless. And it was a success, as North Korean scientists will now use data from the launch to improve the ICBM design, and also in confirming that the international non-response to this provocative launch means North Korea has little to fear in continuing to pursue nuclear missile capability.

At the same time, President Obama announced his intention to eliminate all nuclear weapons worldwide. This longtime dream of the radical left is amazingly naïve, and only serves to lower America's defenses in a world where countries like North Korea are developing the means to target our shores.

America's nuclear capability has been and for now remains a deterrent. It serves as a powerful safeguard of American lives that we have the power to annihilate from the face of the earth any country that launches a massive attack against us. Even if the countries now possessing and on the verge of possessing nukes were to give them all up, the danger of massive attacks via chemical or biologic weapons that can kill hundreds of thousands or millions of people would remain. All a denuclearized world would accomplish is to leave America with no deterrent against attacks by other types of weapons of mass destruction. And, of course, there are countries in the world that will secretly retain nukes even when they declare to the world that they have none.

In terms of combating terrorism and conventional military force, President Obama's overseas trip was a complete failure. Don't buy the spin that his securing 5,000 more support personnel for Afghanistan is anything other than failure. While logistical support is nice to have, this is a shooting war in Afghanistan. We are in major combat operations, and what we need and asked for are combat troops to fight the Taliban and al-Qaeda. Remember that Afghanistan is a NATO war, not just an American war. President Obama asked NATO to carry their share of the burden, and they told him no.

On the economic front, President Obama pledged the U.S. to participate in a global financial control system that would be dominated by Europe. This means European-style overregulation reflecting their socialist policies. These policies historically have led to 10% or 12% permanent unemployment, paltry economic growth and massive government control of private businesses.

All this took place as foreign leaders rejoiced over what they saw as the end of American dominance. British Prime Minister Gordon Brown spoke of a world that moves past American leadership, while former British Prime Minister Tony Blair positions himself to become the first president of the European Union, which will undermine American sovereignty as a "new global architecture" is created. All this while French President Nicholas Sarkozy spoke of the world rejecting American capitalism, as other European leaders reviled free markets and insisted on government-managed economies to support permanent welfare states.

They also undermine our culture and spiritual heritage. These countries are largely secular, some militantly so, and ceding such vast power to become beholden to them will lead to the same suppression of religious practice and belief that characterize many of these countries. This secularism also refuses to make moral judgments, leading to relativistic societies with destructive personal behavior.

President Obama has shown he supports a foreign policy that the radical left has wanted since the 1960s. It could be a long four years.