Kay Coles James
|
Posted: Jul 31, 2019 12:01 AM
Share   Tweet
The opinions expressed by columnists are their own and do not necessarily represent the views of Townhall.com. 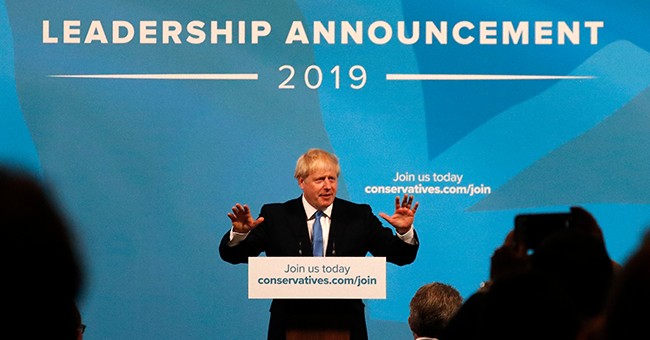 Few may realize the important role that think tanks play as places where world leaders come to share ideas, discuss world problems, and seek solutions to the issues their countries face.

For example, The Heritage Foundation not only works with our own government here in the U.S., but with leaders and thinkers from around the world. Recent visitors to Heritage include El Salvadoran President Nayib Bukele, Estonian President Kersti Kaljulaid, U.N. Secretary General Antonio Guterres, NATO Secretary General Jens Stoltenberg, EU Ambassador Stavros Lambrinidis, and ministers and ambassadors from nations large and small.

New U.K. Prime Minister Boris Johnson is among those who have made visits to Heritage, and from our experience with him, I am excited for the tremendous opportunity the American people have in this strong, very pro-American leader.

Johnson’s top priority will be to get the United Kingdom out of the European Union on Oct. 31, with or without a deal, and that’s good for America.

The United States has a great interest in a truly sovereign United Kingdom. The U.S.-U.K. alliance has been the most powerful and effective bilateral partnership in modern times. It has been the engine of free trade, security, and stability in the world for over 75 years.

The partnership between Ronald Reagan and Margaret Thatcher of the 1980s marked a golden age in the “special relationship” between the U.S. and the U.K. It was an era that expanded freedom and prosperity, not only within the two countries, but across the globe.

The U.S. and Britain now have an opportunity to return to that era with Johnson’s ascension to prime minister, his close relationship with President Donald Trump, and the values they share for our two countries.

While the United States has outstanding relationships with many nations in the European Union, the free world is a better and far safer place when Britain and America stand together and Britain is free from the constraints of clearing agreements with the E.U. before acting. From confronting Vladimir Putin’s regime in Russia and helping to tackle Iran’s aggressions, to keeping the NATO alliance strong, we have much in common.

One of the first—and greatest—post-Brexit opportunities Britain will have is to enter into a free-trade agreement with the United States. The good news is that both the will and the process to get it done are already in place.

The U.S. trade representative notified Congress last December that the Trump administration intended to start trade negotiations with Britain. At the same time, then-Prime Minister Theresa May’s government announced it would make a U.S.-U.K. free-trade pact a priority once Britain left the European Union. With Johnson taking over the reins in London, negotiations should start even sooner.

There’s no reason they couldn’t begin negotiating tomorrow, with the goal of having the deal worked out before October’s Brexit, so that implementation could happen once Britain is freed from the European Union’s trade shackles.

For those who think that a deal couldn’t be hashed out in just three months and ready by October, think again. The ideal free-trade agreement is already written.

Last September, Heritage and a small group of think tanks from both the U.K. and the U.S. created a draft full-text agreement in preparation for that day.

The pact essentially removes all barriers to trade in goods and services and opens up all sectors of the economy to new investment — without encroaching on the sovereign rights of either nation or their citizens. Tariffs on all goods would be eliminated. Restrictions on foreign investment would be removed.

Free trade between the world’s largest and fifth-largest economies would lower consumer prices and the cost of doing business in both countries. It would create more demand for U.S. goods. These cost savings and increased demand would stimulate the economy, increase wages in several sectors, and spur job creation.

This is the time for an ambitious U.S.-U.K. pact that truly allows our businesses — our people — to trade freely. The groundwork has already been laid. President Trump and Prime Minister Johnson have the desire to see a pact succeed.

The ideal agreement would set a new standard for trade deals — one that could open the door to more U.S. free trade deals with other nations, serve as a model for others around the world, and expand prosperity at home and abroad.