Katie Yoder
|
Posted: Aug 27, 2021 12:01 AM
Share   Tweet
The opinions expressed by columnists are their own and do not necessarily represent the views of Townhall.com. 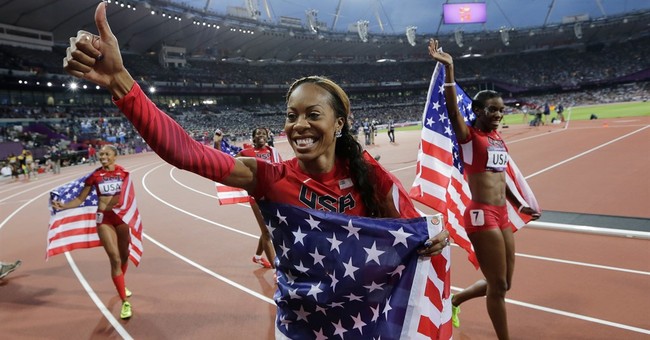 Abortion supporters and media figures readily applaud Olympic athletes when they identify as “pro-choice.” But the personal stories of other Olympic stars about the tragedy of abortion should give them pause. One such story comes from Sanya Richards-Ross.

The four-time gold medalist first revealed that she had an abortion in her book “Chasing Grace,” published in 2017. On Aug. 11, the track and field athlete shared more of her story with Bleacher Report host Master Tesfatsion, during his show called “Untold Stories.” Among other things, Richards-Ross emphasized her reliance on God for healing and forgiveness after her abortion – an abortion she had the day before she flew to Beijing to compete in the 2008 Olympics.

The “hardest thing happened in my whole life,” she remembered. “Right before the Olympics, I found out I was pregnant.”

At the time, she was engaged to her husband, former football cornerback Aaron Ross. They “weren’t ready,” she reasoned, and she didn’t want to give up her Olympic dreams.

It was a choice that forever changed her life.

According to Richards-Ross, abortion is common among her fellow athletes. In her 2017 memoir, she wrote that “most of the women I knew in my sport have had at least one abortion,” NBC reported. She confirmed to Sports Illustrated in 2017 that she didn’t “know another female track and field athlete who hasn’t had an abortion.”

It left her going into the Olympics “with a very heavy heart,” she said. It also took a toll on her physically.

“They tell you to take two weeks off, and I’m in hardcore training right after,” she said. “I land in Beijing and I'm at work.”

It ended up affecting her performance.

“The night before the final, I couldn't sleep. I was in so much turmoil, mentally, physically,” she said. “So when I finished with a bronze medal, it's like everything was wrong, right? Like, here I am, I just had an abortion. And so that was really hard for me and really crushing.”

After competing, she immediately left, unlike the other athletes.

“After the Olympic race, we're supposed to go back to the village,” she remembered. “And I was like, there's no way I'm going back.”

That’s when she hit a low point.

“So I'm bawling, can't really see, I jump on this bus and I end up – I’m on the wrong bus. And I feel completely lost,” she described. “Lost physically, lost spiritually, lost emotionally, and I'm kinda crouched down on the ground crying.”

That’s when, she said, she encountered God.

“I tell you no lie, I feel the presence of God, like hug me in the streets of China,” she remembered. “He was like, ‘I love you and you're forgiven,’ you know? And I was like, wow the love of God is never-ending.”

She wasn’t left alone afterward, either.

“This guy comes over to me, and he's an American, and he recognizes me,” she said. “He's like, ‘Are you okay? Are you okay?’ And he helped me call my mom and I got on the bus and I go home to my family.”

She called that the “start of the healing for me from that whole experience.”

Richards-Ross wants to share her story. In addition to her memoir, she gave a testimony at her home church, Greater Mount Zion Baptist Church in Texas.

“But an abortion? ‘Thou shalt not kill.’ How could I? It went against everything I stood for and everything I wanted to be,” she told the congregation in 2017.

She spoke of God’s hug when she was lost in China – in a part of the country where no one spoke her language.

“All my life, I thought it had to be perfect – or close to it – to earn God's love and his grace,” she said. “But on that day, I knew with all certainty that God gives it to us freely.”

“The worst experience of my life, the one that the devil had intended to use to keep me in bondage, in a place of despair and shame, God used to reveal his perfect love,” she said. “I absolutely don't wish this experience on anyone but what I can tell you is, when life gets gray, when you feel like you've crossed your line and there is no return, God is still waiting for you with open arms.”

“Isn't it a blessing to know that we mean so much [more] to God than our poor choices?” she added. “And isn't it true that our God is so much greater than our shame?”

Richards-Ross’ story reveals the pain of abortion and challenges the media who spin it as a positive thing. But, at the same time, her words offer hope to women – a hope of healing and redemption.

Trending Townhall Video
Did a Political Dispute Cause a North Dakota Man to Kill a Teen? Either Way, He's Now Charged With Murder.
Matt Vespa
Why a Vice News Story About Reintegrating Sex Offenders Into Society Ended Poorly
Matt Vespa
Ford Presents Franchised Dealers With an Ultimatum on EVs