Katie Yoder
|
Posted: Jun 30, 2019 12:01 AM
Share   Tweet
The opinions expressed by columnists are their own and do not necessarily represent the views of Townhall.com. 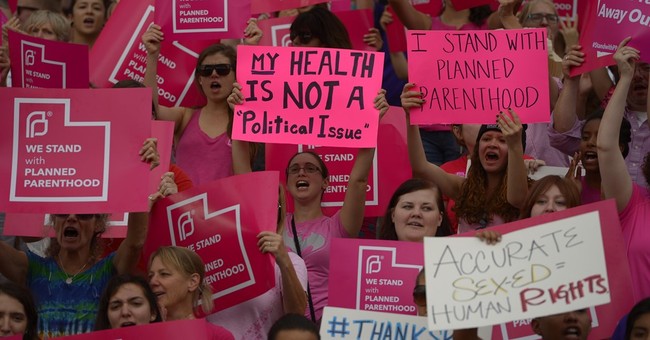 On June 24, Planned Parenthood announced its 2019 Media Excellence awards on both its website and Twitter. They applauded 12 media representatives, from Samantha Bee to Slate and ThinkProgress. Even so, the event was generally left unreported by media outlets.

It was especially grateful this year, which has consisted of “huge setbacks for reproductive rights,” Planned Parenthood continued. “Thank you to the journalists and writers who do the work of investigating and uncovering the truth.”

Speaking of “truth,” Planned Parenthood performed 332,757 abortions and received $563.8 million in “Government Health Services Reimbursements & Grants” for the fiscal year 2017–18, according to its most recent annual report.

They didn’t do it without help. This year, Planned Parenthood recognized media who “covered a spectrum of issues,” especially “non-binary representation, expanding access to abortion in rural communities, Brett Kavanuagh’s confirmation, and pregnancy in ICE detention.”

Here are the 12 media outlets and writers awarded by Planned Parenthood:

Solis accepted an award for her “coverage of abortion and health policies,” including “powerful reporting on six-week abortion bans and miscarriages in ICE detentions.”

Planned Parenthood congratulated Gomez for her “coverage of reproductive and sexual health issues.”

“Thank you for being one of the first to write about how removing physician-only laws could expand abortion access in rural communities,” added Planned Parenthood.

Lithwick won for her coverage “of Brett Kavanaugh’s confirmation to the Supreme Court.”

Bassett received an award for her piece, “Republicans are pushing another false claim about abortion to rile up voters,” about “how anti-abortion politicians use misinformation and false messaging to incite outrage.”

Planned Parenthood awarded Gaglianone’s “coverage of the recent attacks on access to repro health care and its impact on Latino communities across the U.S.”

Planned Parenthood showered love on the TBS host for her work on “feminist issues, reproductive health care, the 2018 midterm election, and the impact of health care policies.”

“And thank you for paving the way for women on late-night TV!” Planned Parenthood added.

Bee, for her part, happily accepted the award, saying, “It is an honor to receive this award for something we really are passionate about: reproductive rights!”

“We have to thank the Republican legislators for getting us into this position with no way out,” she continued. “We wish we could thank Mike Pence in person, but he’ll never be allowed in a room with us, so this will have to do.”

Planned Parenthood recognized Chapman for the article “Who Stands to Lose the Most Under Georgia’s Anti-Abortion Bill?”

Jerving was awarded for her “coverage on the impact of the global gag rule,” including the article, “Q&A: 'Global gag rule' hits Kenya's largest reproductive health organization.”

For decades Planned Parenthood has patted the media’s back. From 1978 to 2015, it recognized 257 journalists, media outlets, and projects. In 2016 and 2018 they again awarded media – and recognized “stories that mattered” in 2017.

For their 2019 winners, Planned Parenthood concluded with a thank-you message: “We appreciate and admire your commitment to accurate and passionate reporting. We need your voices in the fight for reproductive rights.”

But so do the majority of Americans who want abortion restricted.

Journalists should “Support the open and civil exchange of views” and “give voice to the voiceless,” according to the Society of Professional Journalists’ ethics code. But that’s a difficult feat while doing Planned Parenthood’s bidding.