Katie Pavlich
|
Posted: Nov 20, 2019 12:30 PM
Share   Tweet
The opinions expressed by columnists are their own and do not necessarily represent the views of Townhall.com. 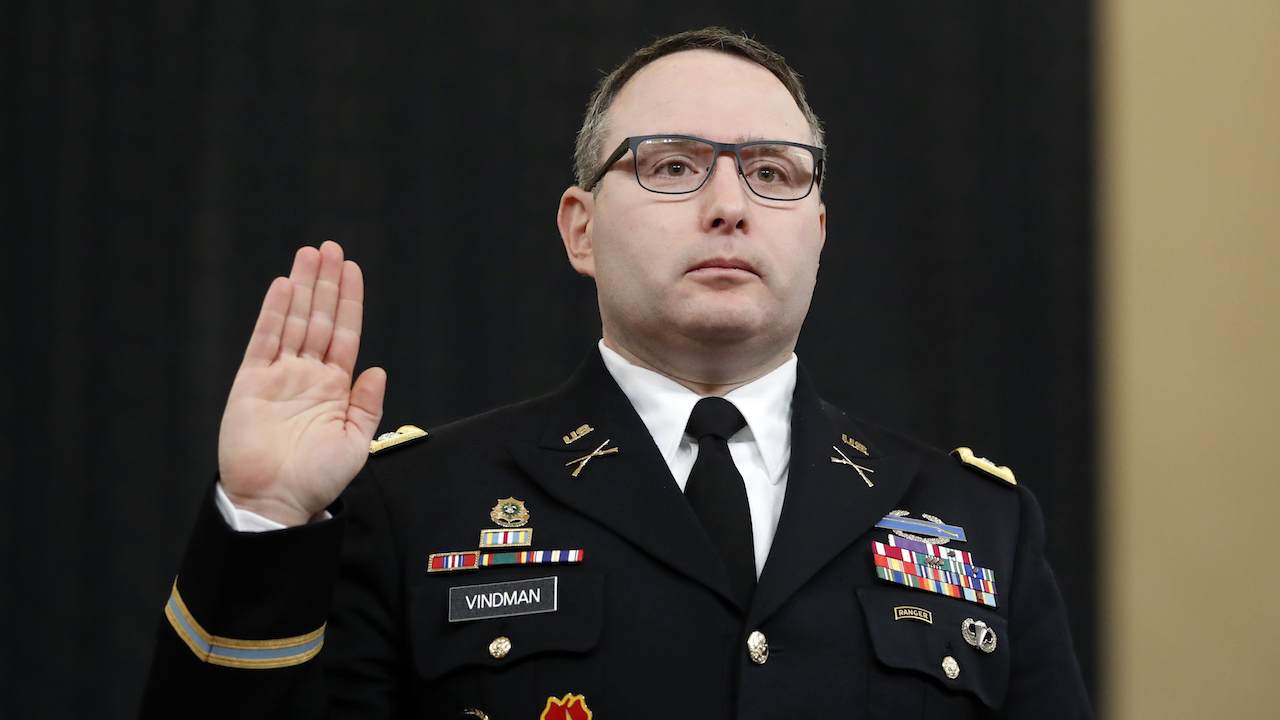 National Security Council member Lt. Col. Alexander Vindman testified publicly in front of the House Intelligence Committee on Tuesday. Given he was on the July 25 phone call between President Donald Trump and Ukrainian President Volodymyr Zelensky, Democrats saw him as one of the most credible witnesses who could bolster their arguments for impeachment.

But Vindman’s testimony actually did the opposite and repeatedly poked holes in Democratic arguments made since the whistleblower complaint was filed with Chairman Adam Schiff in August.

First, Vindman confirmed the July 25 phone call transcript released by the White House was accurate and that the only omission was “Burisma” due to a transcriber missing it during the conversation. Democrats have falsely accused the White House of somehow “doctoring” or eliminating language from the published summary.

“I certainly would describe it [the call] as substantively correct,” Vindman said.

When asked about why Burisma was left out, he explained, “I attribute that to the fact that this transcript that is being produced may have not caught the word ‘Burisma.’ It was in the transcript that was released it was released as ‘the company,’ which is accurate. It's not a significant omission.”

“It's informed speculation that the folks that produce these transcripts do the best they can, and they just did not catch the word, and it was my responsibility to then make sure that the transcript was as accurate as possible,” he continued.

Second, Vindman said the call was moved onto a separate and secure system because White House and National Security Council officials were concerned about leaks. This bolsters the argument from Trump officials who have justified the move and debunked the Democratic narrative that it was moved to “hide” President Trump’s efforts to have Ukraine investigate the Bidens.

“From a foreign policy professional perspective, all of these types of calls would inherently be sensitive. This one may be more so because it could somehow undermine our relationship with the Ukrainians. So, from that standpoint, you know, I guess, in my mind, it could be justified to put it in the system,” Vindman said. “If they want to limit access to it, because they think it's sensitive or they don't want it to go out to a broader community, we'll do that. Whether that's what it was designed for, you know, it seems it might not be, but that's not unusual that something would be put into a more restricted circulation.”

“There was also a discussion of the fact that the -- there are constant leaks and that it was appropriate to restrict access for the purpose of the leaks,” he continued.

Finally and most importantly, Vindman outed himself as a leaker.

"Lieutenant Colonel Vindman, did you discuss the July 25 phone call with anyone outside the White House on July 25 or the 26 and if so, with whom?” House Intelligence Committee Ranking Member Devin Nunes asked.

Vindman said he spoke to Deputy Assistant Secretary George Kent and refused to name the second person. Chairman Adam Schiff then jumped in, cutting off the questioning from Nunes and answers from Vindman, and said the whistleblower needed to be protected. This confirmed that the second person, who Vindman described as someone who works in the intelligence committee, was the whistleblower.

This individual filed a whistleblower complaint with Schiff in August based on second-hand information, which came from Vindman.

In the end, Vindman confirmed Republican and Trump administration arguments against impeachment while outing himself as someone who couldn’t be trusted to sit in on sensitive, presidential phone calls.