Katie Pavlich
|
Posted: Sep 21, 2018 12:01 AM
Share   Tweet
The opinions expressed by columnists are their own and do not necessarily represent the views of Townhall.com. 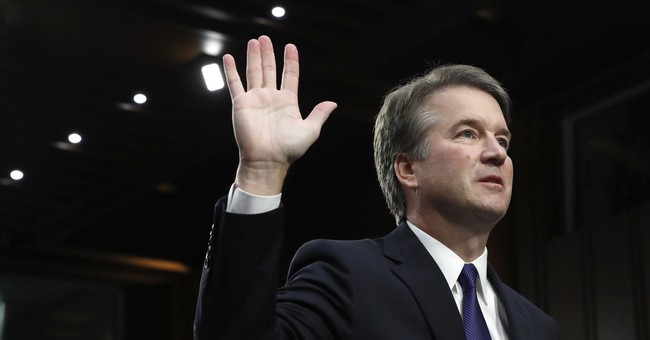 In the era of the #MeToo movement, we are expected to automatically believe claims made by women about sexual abuse. Anyone who dares to ask simple questions about the situation, like who, what, when, where, why and how, is automatically characterized as “doubting the story of a survivor.”

Sexual assault is one of the most sensitive areas of criminal misconduct in American society. Allegations of sexual assault are very serious for all parties involved and they should be treated as such. Women who are victimized should be taken seriously as they seek justice. Men who are accused of sexual misconduct have the right to face their accusers, in addition to being presumed innocent until proven guilty.

While the majority of women who make sexual abuse allegations tell the truth, ugly history of high profile cases show some don’t.

In March of 2006, Crystal Mangum accused white members of the Duke lacrosse team of gang raping her at a party. Before any evidence was provided to a court or to the public, the lives of the players were turned upside down. Their season was cancelled, the coach resigned, Duke faculty upheld the players as examples of racism in America and the New York Times smeared the players on a national level. The players were deemed guilty from the beginning.

When DNA evidence from all 46 eligible members of the team came back as negative, over zealous District Attorney Mike Nifong pressed on. Three young men, Collin Finnerty, David Evans, and Reade Seligmann, were arrested and charged.

“These allegations are lies. Fabricated and they will be proven wrong,” Evans, who served as team captain, said at the time.

Eventually the case fell apart and the charges were dropped. The players were declared innocent, just as they had argued and the evidence proved all along. Their reputations, however, were tarnished forever. Years later, Mangum was found guilty of murdering her boyfriend.

In her pursuit of justice and in order to “prove” her allegation, Sulkowitz carried a mattress around campus and vowed to do so until Nungesser was kicked off campus or put behind bars. In her mind he was a rapist and she wanted everyone to know it.

Her actions received praise from Democrat Senator Kirsten Gillibrand, she was invited to President Obama’s State of the Union address as a guest and was given glowing profiles in a number of major media outlets, including the New York Times. Her depiction of Nungesser was a success, with students and professors shunning him. This prompted Nugesser to file a lawsuit against the university and eventually officials issued an apology.

“Columbia recognizes that after the conclusion of the investigation, Paul’s remaining time at Columbia became very difficult for him and not what Columbia would want any of its students to experience,” the university released in a statement. “Columbia will continue to review and update its policies toward ensuring that every student — accuser and accused, including those like Paul who are found not responsible — is treated respectfully and as a full member of the Columbia community.”

That same year, Rolling Stone published a story titled, “A Rape on Campus.” The story alleged members of a fraternity repeatedly raped a woman named “Jackie.” The story wasn’t true, the rape didn’t happen and the magazine eventually paid the fraternity nearly $2 million after losing a defamation lawsuit.

"The article, written by Sabrina Rubin Erdely, was retracted in April 2015 after a police investigation found no evidence to back up Jackie's account," NBC News reported in 2017, when the lawsuit was settled. "In their complaint, the fraternity claimed the magazine knew that Jackie was not a reliable source but proceeded to publish her story without verifying all of her facts. The writer did not attempt to reach out to the alleged ringleader of the supposed attack or contact any others who could have debunked the story, the suit claimed."

In America, it is our duty to avoid the conviction of innocent men. Our system of justice, although flawed at times, is set up to prevent false convictions through due process. A system of due process allows for an equal, unbiased playing field between the accuser and the accused. In the court of public opinion, like in a court of law, we should base judgment on the evidence, rather than automatically condemning men who are accused by women.  This isn’t an assumption that a woman making an accusation is lying, rather, it’s the best way to provide true justice and credibility to both parties.

This of course brings us to the current accusation against Supreme Court Justice nominee Brett Kavanaugh. Christine Blasey Ford, a professor at Stanford University, alleges Kavanaugh attempted to rape her while drunk at a party in high school.

“While his friend watched, she said, Kavanaugh pinned her to a bed on her back and groped her over her clothes, grinding his body against hers and clumsily attempting to pull off her one-piece bathing suit and the clothing she wore over it. When she tried to scream, she said, he put his hand over her mouth,” the Washington Post reported. “’I thought he might inadvertently kill me,’ said Ford, now a 51-year-old research psychologist in northern California. ‘He was trying to attack me and remove my clothing.’”

Crucial details surrounding Ford’s allegation are still missing. Where was the party? When did the party occur? She’s also been unclear about how many people were in the room. First it was four and then it was two.

Kavanaugh completely rejects the allegation and has vehemently argued he has never engaged in the type of behavior alleged toward anyone.

“This is a completely false allegation. I have never done anything like what the accuser describes—to her or to anyone," Kavanaugh released in a statement. "Because this never happened, I had no idea who was making this accusation until she identified herself yesterday.”

"I am willing to talk to the Senate Judiciary Committee in any way the Committee deems appropriate to refute this false allegation, from 36 years ago, and defend my integrity,” he continued. “Sixty-five women who knew Kavanaugh in high school, including two who dated him, have backed his integrity, behavior and character. “

In order for true justice for either party to be achieved, judgment should be rendered on the facts, not on gender. No two sexual assault cases are the same and each should be viewed and analyzed individually. The claims of both parties should be taken seriously, investigated and truthfulness determined on evidence.