Katie Kieffer
|
Posted: May 26, 2020 12:01 AM
Share   Tweet
The opinions expressed by columnists are their own and do not necessarily represent the views of Townhall.com. 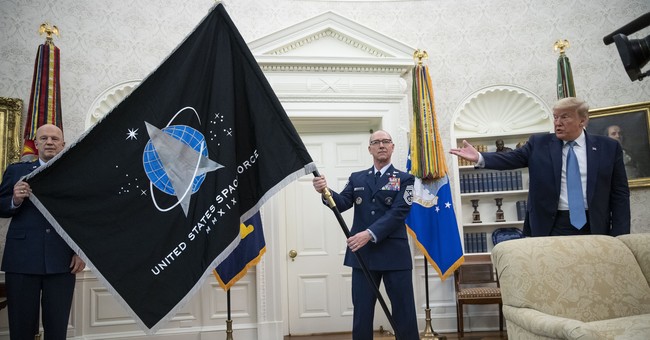 We – the United States – are at war with China. And China’s next play – following COVID-19 - is to be “first” in the multi-trillion-dollar market of space. President Trump is taking concrete steps to beat China in space: last week, he launched the Space Force as the sixth branch of the U.S. Armed Forces and, this week, he attends the launch of a public-private partnership at the Kennedy Space Center meant to ensure America is no longer reliant on Russia for shuttles to the International Space Station.

By 2029, China is on-pace to deploy solar power stations and nuclear propulsion technology capable of disabling the U.S. military and power grid.

“America’s greatest competitor for the high ground of space is Communist China, which is already fully engaged in building effective space capabilities. … We are capable of forestalling China’s plan, but only if we begin to build a Space Force soon and on the right plan. … China’s goal is to have the capability to shut down America’s computer systems and electrical grids at any time or place of its choosing, using directed energy and 5G technologies from space,” retired Air Force general Steven L. Kwast warned a few months ago.

China succeeded in grinding America’s historically prosperous economy to a halt in mere months by evidently releasing the COVID-19 virus from its Wuhan lab. Americans were blindsided (particularly since China lied about the nature of the virus and deleted evidence of its origins)—and nearly 39 million Americans lost their jobs in a few short months.

Had we, as a nation, recognized China as our enemy, we may have been more prepared. But because most politicians (aside from President Trump) have long-failed to acknowledge China’s warfare strategy, Democrats have succeeded in using the COVID-19 crisis to scare Americans into thinking that the “enemy” is a virus—and the “solution” is to shatter our economy.

An Electro-Magnetic Pulse (EMP) attack will be far more deadly and catastrophic than COVID-19 (98 percent of those who contract COVID-19 recover). Fewer than 10 percent of the American population would survive an EMP attack. In other words, whereas COVID-19 has a 98 percent survival rate, an EMP attack has a 90 percent mortality rate.

If you think COVID-19 isolation is bad, imagine living without food, clean water, internet, heat, air conditioning, cars, or cell phones. Space is the next generation in warfare, and the U.S. is still preparing for wars fought with “boots on the ground.”

We’ve spent $2 trillion on the coronavirus thus far. For less than half that price tag, we could become “first-in-space” and defend our entire country against EMP. Space is a multi-trillion dollar market and we’d quickly see a massive return on our investment.

Space is the future of both war and peace. Space technology, properly developed, can deliver fresh water, clean and affordable energy and low-cost internet to Americans. Space is a frontier for harvesting seeds, medicines and human shelter. Natural disasters including hurricanes, tornados and small asteroids can also be mitigated from space. Whichever country is “first in space” will create the “rules” of space. Today, the country closest to becoming first in space is Communist China.

What causes an EMP attack?

EMP attacks can occur naturally (by geomagnetic storm) or by human construction (via a cyberattack or massive thermonuclear detonation). Approximately every 60 years, the earth sustains a geomagnetic storm. The last space storm occurred in 1989 and left six million people in northeastern Canada without electricity. Earth is due for another such storm around 2049. So, even if China, Russia, North Korea, Iran, Pakistan or a terrorist group don’t level an EMP attack on Earth—a solar superstorm is expected to do so and it makes sense to prepare.

Cars and cell phones are built with microprocessors (and are essentially computers)—and could stop running in the event of an EMP attack. For years, we should have been proactively hardening electronics and protecting our grid. Unfortunately, despite some 20 years of warnings from the EMP Commission that a natural or manmade attack is an absolute threat to the United States, we are woefully unprepared.

America’s strategy to ward off an EMP attack should lean heavily on nuclear power. Nuclear plants—whether new or existing—are more easily designed or upgraded to be EMP-resistant than most other forms of energy. After an EMP attack, nuclear power generators are more reliable and resilient in terms of a quick restart and as a supplier of baseload energy than alternatives.

NuScale, an Oregon-based small modular nuclear reactor (SMR) company, is a fantastic example of how straightforward and practical it is to make a nuclear power plant EMP-resistant. In 2019, NuScale made headlines for designing its SMR to become the strongest and most dependable source of energy in the world.

Earthquakes, F5 tornadoes, floods, plane crashes, Category 5 hurricanes, geomagnetic disturbances, cyberattacks and EMP attacks are all incapable of disabling NuScale’s SMR. If that sounds pretty cool, it is. Nuclear power gets a bad rap and it is actually very amazing. America should build more nuclear power plants like NuScale’s in its effort to withstand natural and manmade EMP and crush China’s nefarious plans in space.

Nuclear power is also the next generation of rocket propulsion. NASA engineers and experts believe that nuclear thermal and nuclear electric propulsion may be more efficient and powerful than chemical propulsion. Regulations and lack of funding have crippled the development of nuclear-powered rockets by the United States since the 1970s. President Trump is the first president to decisively reverse “60 years of stagnation,” reports Iain Boyd, Professor of Aerospace Engineering Sciences at the University of Colorado Boulder.

Of the 50 nuclear reactors under construction in the world today, only two are in the United States. It is unacceptable that the U.S. is the former world leader in nuclear energy development. Public and private sectors must collaborate to reinstate the United States in the coveted position of energy independence.

How America should prepare for an EMP attack:

We should ease nuclear plant regulations in a safe manner to encourage the production of new nuclear facilities; upgrade existing nuclear plants in order to keep them open; and restart the South Carolina nuclear projects stalled by government regulation and Westinghouse bankruptcy.

President Trump established the Space Force as the sixth branch of the armed forces. Unfortunately, Congress has shackled the new force with bureaucratic red tape and there is concern that the resulting force is effectively an extension of the existing Satellite Command under the purview of the Air Force.

In developing and funding the Space Force, Congress should heed the advice of experts like retired General Kwast, who highlights a five-point plan for the President and Congress to win the war in space and the nine recommendations of Dr. Peter Pry, executive director of the Task Force on National and Homeland Security.