A Vote Against Hillary

Katie Kieffer
|
Posted: Jun 13, 2016 12:01 AM
Share   Tweet
The opinions expressed by columnists are their own and do not necessarily represent the views of Townhall.com. 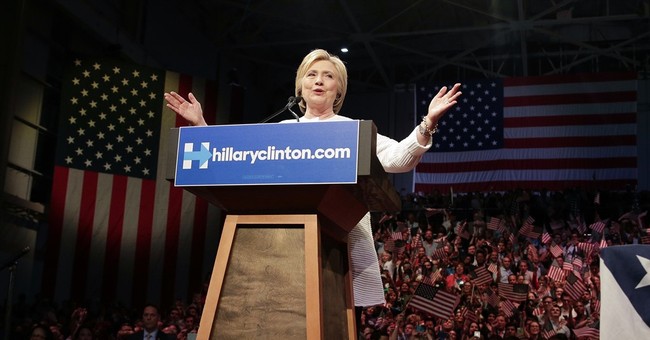 Trump never promised me anything. Indeed, he refused to promise not to run third party. Yet those who proposed political marriage—or unity—to Trump are now filing for divorce, even though it means losing our country to Hillary.

If you’re a regular reader, you have likely intuited that my top choices for president were Sen. Rand Paul and Sen. Ted Cruz. But I refuse to join the “Never Trump” crowd and feel drawn to explain why—so that you too may decide.

“I don’t throw anything away. I’m like two steps short of a hoarder.” –Former Secretary of State Hillary Clinton in 2015

Hoarder? What a laugh. On May 25 of this year, the State Department announced that Clinton’s closest aides ignored multiple warnings that her email system was an easy target for hackers—yet she and her team failed to resolve these vulnerabilities.

Trump has many issues, which I’ve shared in previous columns. But most are in the open. And, he has notable positives. Hillary, on the other hand, kept her emails on a private server in an obscure Colorado bathroom and conveniently deleted some 30,000 emails—claiming they were “personal.”

To date, the most notable third party candidate—Libertarian Gary Johnson—is unviable. Johnson won less than 1% of the popular vote when he ran for president in 2012. He’ll be lucky to break 5% in 2016. And if the GOP establishment tries to broker its convention to oust Trump, civil war will erupt and the discord will greatly benefit Hillary. So Trump is our only viable option against Hillary. Here are three reasons to consider giving Trump a chance.

Trump has already expressed a strong willingness to appoint pro-life Supreme Court justices.Hillary, in contrast, says: “I would not appoint someone who didn’t think Roe v. Wade is settled law.”

When you appoint a Supreme Court justice, their appointment is for life. Therefore, it would be helpful if the judge were an individual committed to defending life. As our Declaration of Independence articulates, reason tells us that every American—and every human—has the right to “life, liberty and the pursuit of happiness.”

Life isn’t an issue restricted to the unborn. Cases regarding immigration, gun rights, free speech, and healthcare all deal with protecting the right of Americans to live a free and healthy lifestyle, and our Supreme Court will face such cases soon.

Hillary would have you believe that Trump is waging a war on life by proposing a stricter immigration policy. She prioritizes buying votes over listening to her constituency: the majority of Americans (61%) now consider “continued immigration” into the United States to be a national security threat. Furthermore, most Americans (51%) now support Trump’s travel ban.

These numbers are no surprise when you consider that half of Americans are in poverty and making under $30,000 a year—and that bad U.S. Customs and Border Protection officers are being charged with smuggling immigrants into this country, while the good officers are told to “stand down.”

Most Americans understand that we already are extremely generous and welcoming to newcomers. Our government’s own records attest that a whopping 17%—nearly one fifth—of the U.S. labor force is foreign-born. This is a 20-year-high. But benevolence has practical limits, especially at a time when our economy is anemic and terrorist groups are infiltrating immigrant and refugee populations.

You can tell a great deal about someone by their friends—or their enemies. And Trump has all the right enemies, including the biggest hypocrites on the right.

House Speaker Paul Ryan, for example, recently lambasted Trump as a “racist.” But isn’t it interesting that Ryan’s own policies are actually anti-human? Ryan doesn’t discriminate in his efforts to make it more difficult for our economy to recover and for Americans to find good jobs. He made all Americans—regardless of racial heritage—subsidize a $1.15 trillion spending bill bigger than any splurge of Sen. Harry Reid or Rep. Nancy Pelosi.

“I’m with her!” has been the clarion cry of establishment Republicans like former John McCain senior presidential campaign advisor Mark Salter. But clapping ones hands for Hillary is to applaud a woman whose hands are metaphorically stained with the blood of four dead Americans in Benghazi—and whose piggy bank bulges with the coinage of crony capitalists.

Clinton claimed that she and husband Bill were “broke” in 2001 when they left the White House. That same winter, she clutched in her hand an $8 million advance to write a memoir for Simon & Schuster. Meanwhile, Bill managed to haul in $9.2 million in speaking fees that year. While they did owe several million, their debt was likely due to Bill’s affair with White House intern Monica Lewinsky and their own poor money management skills.

No wonder Millennials—who lean Democratic—distrust Hillary Clinton and have been either sitting by the sidelines or rooting for Sen. Bernie Sanders during this election cycle. She can’t be trusted, even by the most politically uninformed. Give Trump your consideration.