Katie Kieffer
|
Posted: Apr 11, 2016 12:01 AM
Share   Tweet
The opinions expressed by columnists are their own and do not necessarily represent the views of Townhall.com. 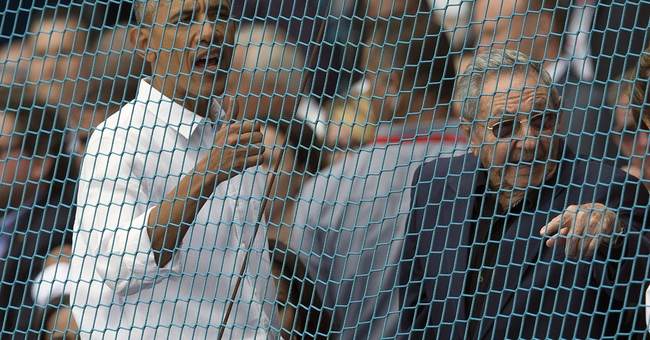 “Between capitalists and communists or socialists… for your generation, you should be practical and just choose from what works!” President Obama told a room full of Millennials in Argentina last month.

It’s hard to take Obama seriously after watching him jet to Cuba in March and pose before a mural—dedicated to militant Marxist Che Guevara—and do “The Wave” at a baseball game with current Cuban dictator Raúl Castro.

While our President partied with a despot on a Caribbean island, ISIS terrorists blew up Brussels. Good thing Attorney General Loretta Lynch was holding down the fort back home in America. After all, post-San Bernardino, she did a stellar job of bringing ISIS to justice by promising to “prosecute” anyone she felt was using “anti-Muslim rhetoric.”

Nearly 13 percent of Millennials are unemployed. Others scrape by with odd “gigs” from apps like Uber and TaskRabbit, and by racking up debt. In 2015, the middle class fell out of the majority, meaning that when Millennials do find employment they struggle to earn over $42,000 annually. Which is why young people say they are delaying home ownership and childbirth. The average American woman is 26 years old before she becomes a mother, a new high.

Pew Research reports that more young women are living with their parents today than in 1940—when my grandmother was 20 years old and even most women thought their “place” was in the home.

Redistributive policies are directly to blame for a trend I call “the new shacking up.” Seven years after Obama’s so-called recovery—roughly 1 in 3 Millennials is unable to live independently—grudgingly “shacking up” with relatives or roommates well into their early thirties.

Where do Obama’s loyalties lie? Why is he telling Millennials to “pick and choose” from capitalism, socialism and communism—as if doing so were as inconsequential as picking between roses, sunflowers and carnations at a farmer’s market?

HUD further specified that if you’re a criminal, you “ought to have” a “second chance at life,” and “criminal history-based restrictions on access to housing” are likely to be racially discriminatory against “African-Americans and Hispanics”—and “likely to lack a legally sufficient justification [landlords could be sued for turning away tenants with a criminal past].”

HUD’s new policy is inherently racially discriminatory. It is evenhanded to proffer justice to criminals—by denying them the privileges of law-abiding citizens. It is discriminatory to presume that African-Americans and Hispanics are more predisposed to corruption than Asians, Arabs, whites and American Indians.

Obama himself is biracial. Given that each successive generation of Americans is growing more blended, why does he persist in pretending that we live in a black vs. white world? Why not draw us together, and encourage us to be self-sufficient entrepreneurs as 70 percent of Millennials say they aspire?

Shelter—a roof over your head when you sleep at night and a place to safely stow your belongings during the day—is essential to life. A free and moral society is one that rewards an industrious and upright man or woman by respecting their independent ownership or stewardship (rental) of a personal shelter (home or an apartment). Furthermore, a free society punishes criminalsby removing their right to dwell independently.

HUD’s new guidelines are a great example of the damage done to law-abiding Americans, especially Millennials who lack a nest egg, by a president who arbitrarily “chooses” to put communism and socialism on par with the free market.

A young woman who can’t afford to buy a home—but can rent a small apartment—could now be compelled to live in a complex where her next-door neighbor is her future burglar, murderer, or rapist. Because bad people deserve subsidized second chances.

This sort of preferential treatment for thugs is jaw-droppingly unprecedented. It’s also immoral.

Hillary Clinton could be convicted of obstructing justice or violating federal law due to sending what are now classified as top state secrets via a personal email address and storing these confidences on a personal server in an obscure Colorado lavatory.

If indicted, Clinton could lose the right to live independently in her $1.7 million Chappaqua, NY mansion or $2.85 Washington, D.C. Embassy Row mansion.

Her new home could be a locked commune full of women wearing the same orange jumpsuit; eating off the same menu; and sleeping on the same cot. For the first time in her life—she could genuinely say she was “dead broke.”

But that won’t happen to her under Obama’s new HUD rules. Because criminals—including white ones—can’t be discriminated against.

Preferential treatment for thugs isn’t right. This fall, we can’t afford to elect Obama 2.0—Clinton. We also can’t risk electing a repeat Clinton donor. We must elect a man committed to sweeping the cobwebs from Washington.