Katie Kieffer
|
Posted: Feb 01, 2016 12:01 AM
Share   Tweet
The opinions expressed by columnists are their own and do not necessarily represent the views of Townhall.com. 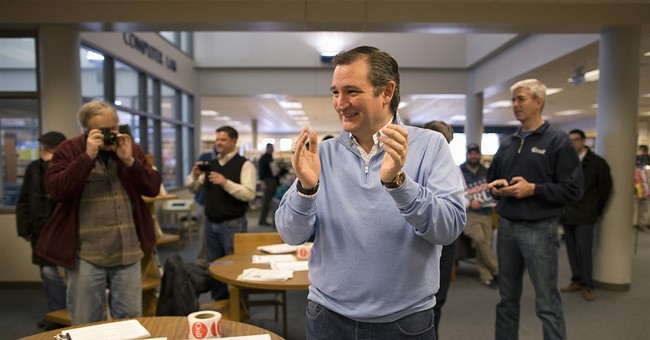 Inconsistency on healthcare and abortion helped Mitt Romney lose in 2012, especially among young voters. Iowa caucus and New Hampshire primary voters: here’s what you need to know to elect a winner.

Contrary to popular opinion (among GOP elites)—but in-line with all the major research on Millennials—to win the White House in 2016, we must nominate a candidate who is strong and steady. Transparency and consistency are extremely important to Millennial voters, the majority of whom 2012 CNN exit polls show favored Mr. Consistent, Ron Paul, over all Republican candidates.

Barack Obama and Bernie Sanders share something important with Ron Paul that endears them to young people: consistency. Because consistent people convey reliability. In contrast, Romney was pro-abortion before he was pro-life. He was simultaneously the architect of RomneyCare and the ambassador for the anti-ObamaCare party. This irregularity was a red flag to millions of young voters.

Her entire life, Hillary's secret weapon was Bill until Millennials discovered his dark past and Bill's approval is now at a low of 39%. Young people wonder how she can be an advocate for women’s freedom and health if she defended her husband’s use of a cigar for forcible “non-sex” with a young employee.

Hillary has pop star Katy Perry in her entourage, but Bernie has an 11 percent lead on Hillary among Millennials according to Ipsos Public Affairs. The New York Times is reporting how Iowa high school students are braving the snow and cold to canvas for Bernie. The Bern is hot.

In addition to their desire for sincerity in a candidate, it’s worth noting that Millennials are not chomping at the bit to subsidize abortion. The majority (51%) of Millennials believe abortion services should NOT be covered by health insurance and less than one third self-identify as strongly pro-choice, according to a massive 2015 study by Public Religion Research.

Sen. Ted Cruz and reality TV star Donald Trump are the current GOP frontrunners. Only one of these men could win the trust of young people.

"Look, we've gotten along fine," Reid told reporters last week, assuring them that yes, he and Trump are bros. "With that bunch of people running, I'm kind of pulling for him." He added, “I remember the good old days when he did a fundraiser or two for me."

“I've always had a good relationship with Nancy Pelosi. …I always had a great relationship with Harry Reid. …I'll be able to get along well with Chuck Schumer,” Trump boasted last week on MSNBC. In the next breath, Trump called Cruz “nasty.” (Cruz is quickly catching up to Trump in the polls, which apparently makes him pond scum.)

Ironically, two years ago, Trump said: “I like Ted Cruz so much. … What he’s doing is right. It’s common sense. It’s good government. It’s so many good things. He’s now a very popular and important figure. So, with that, I would like to introduce a very special guy, Senator Ted Cruz.”

But Reid wasn’t supposed to admit that Democrats are pulling for Trump. Sen. Chuck Schumer, who was nearby, reminded him. "Obviously it wasn't very funny, Schumer kicked me in the back [of the] leg," Reid said.

Reid is very honest—if you listen closely. Last week, Reid’s Senate Majority PAC sent out an email calling a bill to protect a baby in its final four months of pregnancy—when it possesses all its organs, its eyes, and its brain—“our WORST NIGHTMARE.”

Trump is a winner. Or so he likes to say. But winners—whether athletes, businesspeople or entertainers—are unflappable and consistent.

“Would president Trump ban partial birth abortion?” Trump was asked in a Meet The Press interview on Oct. 24, 1999 when he was toying with running on a Reform Party ticket. Trump responded: “Look, I’m, I’m very pro-choice.” TV host: “You would not ban it?” Trump: “No. ...I am pro-choice in every respect.”

Fast forward to 2011. Trump is interviewed by The New York Times while he is considering a presidential run, but as a Republican. Trump said: “There are certain things that I don't think can ever be negotiated. Let me put it this way: I am pro life.”

Going by their own words, neither Trump nor his “great” friend Reid has a problem with forcing taxpayers to subsidize the practice of dismembering a 5-month-old baby.

Yes, the actuality of an unborn baby is limited. But its potentiality is greater than any living thing in the world. Greater than that of an adult of any age. A 76-second-old baby (moments after conception) possesses substantially more potential than 76-year-old Sen. Harry Reid. That’s a fact. And it’s one reason why we want to protect and cherish babies and not destroy them by pretending babies are “nightmarish.”

No wonder a Millennial man under the age of 30 called into Rush Limbaugh’s radio show last Friday with concerns about Trump’s moral compass. Yep. It wasn’t an 80-year-old grandfather calling in. It was a Millennial.

Compare Trump’s crowds (angry elders) with Bernie’s crowds (hopeful youths). If Republicans want to win, they need to reach the hearts of the folks in Bernie’s camp. And those folks value sincerity—which is demonstrated by consistency—a quality that Trump—and Hillary—both lack.

Sen. Cruz shook off Trump’s comments about being “nasty” and headed to Flint, Michigan to give out purified water to pregnant mothers and young children.

Predictably, the mainstream media called Cruz a hater for focusing on women and children instead of the broad populace (even though children under the age of six are the most vulnerable to developing brain damage from high levels of lead). Cruz was also criticized for encouraging poor pregnant mothers to utilize private pregnancy crisis centers that could connect them with affordable healthcare services and adoption resources, presumably instead of sending them over to Planned Parenthood for a subsidized abortion.

Give me a break. While Trump indulged in self-pity, Cruz took time to give others a hand. While Trump spent the last few decades changing his stance on life to correlate with the political party he felt would help him win the White House, Cruz remained consistent.

After ObamaCare passed, monthly healthcare premiums for Millennials over the age of 26 jumped 30% for young women and 73% for young men. In response, Cruz has consistently fought to repeal and replace ObamaCare with a better system that will enable young people to care for themselves—and their children—without going broke.

Meanwhile, Trump is promising to expand socialized medicine. Brilliant! Borrow more money from China. Why didn’t anyone think of that before?

Keep this guide with you as you caucus or vote in your primary. You can’t afford to nominate a Romney 2.0. Enough with boys. This time around, let’s nominate a man.