Katie Kieffer
|
Posted: Jan 11, 2016 12:01 AM
Share   Tweet
The opinions expressed by columnists are their own and do not necessarily represent the views of Townhall.com. 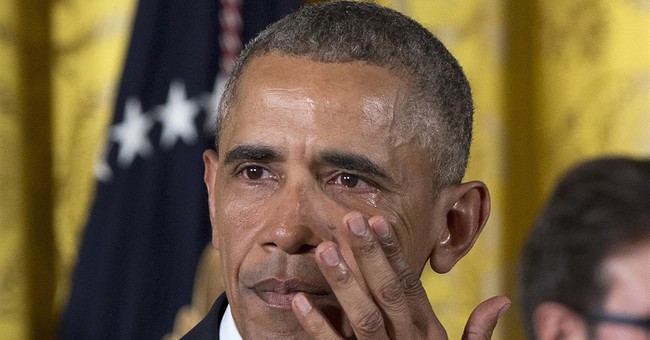 Cry me a river on cable TV, Mr. President. But do not set your sights on my generation’s natural right to self-defense.

Politico wrote last week that Millennials are Obama’s “prime target” for his agenda on “gun control.” Let me be clear: Obama isn’t setting his sights on Millennials to target them with anti-gun messaging because they are naïve gamers who will believe anything on Snapchat or date anyone on Tinder.

Our parents, the Baby Boomers, spend nearly 40 minutes a day surfing Facebook. Every generation of Americans could do more to unplug and get informed. But the onus is on all of us to educate our youth.

I’m often asked, “How could the majority of Millennials be so stupid as to vote for Barack Obama a second time after he left them jobless and in-debt the first time? Will they fall for Hillary too?” For the full answer, read this with the Millennials in your family before November.

In truth, Millennials are smart. They’re as passionate about hard news stories as their superiors. A 2015 comprehensive study by The American Press Institute found: “Nearly all of these young adults follow what are traditionally considered ‘hard’ news topics. [On any given day,] the average Millennial follows about four hard news topics and 45 percent of Millennials follow 5 or more.”

Obama is targeting our youth because, even though many did vote for him, the majority of Millennials self-identify as “independents” rather than as Democrats or Republicans. He knows they are still open-minded enough to be swayed in either direction. Obama’s overall approval numbers are dipping to 45% and even lower on national security (66% of Americans say he has “no cogent plan” to combat ISIS).

If he and Michelle hope to maintain their extravagant lifestyle post-presidency, he must prove to his most natural fan base that his “strategy” of disarming American citizens—while looking the other way when the TSA hires 73 employees on terrorist watch lists and his administration fails to encrypt the personal data for 21.5 million Americans now under the ownership of Chinese hackers—is effective.

Guns Facts To Share With Millennials
As a generation, Millennials are very pragmatic. Facts and figures resonate with them. Here are some facts to share with your young friends to counter Obama’s biggest lies about guns.

1.) Guns Are An Inefficient Way To Commit Mass Murder
President Obama has presided over one of the most anti-gun administrations in history, while reigning over a historic high in mass shootings.

Timothy McVeigh used a truck bomb to kill 168 and injure more than 600 people in Oklahoma City. The 9/11 Hijackers used commercial aircraft to kill nearly 3,000 and injure over 6,000 in 2001. The Tsarnaev brothers used pressure cooker bombs to kill three and injure 264. And it goes without saying that the suicide bombers responsible for the November 2015 Paris Attacks primarily used bombs to kill 130 and injure 368.

Unless a domestic terrorist employs a secret army with unlimited boots, arms and ammo, guns are an ineffective tool to kill and terrorize a high number of innocent civilians. Drones, a weapon with which Obama has irresponsibly killed countless innocent civilians, are far more effective. And there’s a reason why modern militaries increasingly favor airstrikes over ground troops.

2.) Tighter Gun Restrictions Don’t Prevent Mass Violence
Terrorists and criminals despise laws and morals. They could care less about a paper sign that says “GUNS PROHIBITED ON THESE PREMISES.”

California has some of the tightest gun regulations in America, yet these laws failed to deter Elliot Rodger from killing six and injuring 14 near the University of California in 2014. Most recently, Jerry Brown’s iron grip on guns did nothing to stop Tashfeen Malik and her husband Syed Farook from carrying out the San Bernardino terrorist attack last month.

European countries have stricter gun controls than much of America and yet two of the most horrifying terrorist attacks in modern history happened last year in Paris, France: the Charlie Hebdo Shooting where armed terrorists fatally shot 12 and wounded 11 and the November 2015 Paris Attacks discussed above.

There would have been a third attack in Paris last year had it not been for a vacationing American serviceman and his two friends. They stopped a would-be terrorist on a Paris-bound train by pouncing on him—and incurring knife wounds in the process.

Obama, like Bill Clinton before him, has no problem shedding a tear for the TV cameras to make a point when at a loss for facts. Do your part and share these gun facts with Millennials before Obama pulls the trigger on his anti-gun misinformation campaign.