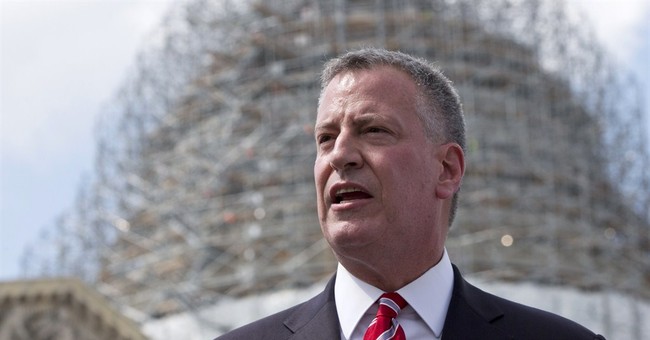 Eight people died on an Amtrak train last week, and New York City Mayor Bill de Blasio took selfies at the crash scene. He wasn’t literally holding a selfie stick and saying “Cheese!” But he certainly found a way to transform the tragedy into a political opportunity for himself.

Around 9:30 p.m. last Tuesday, the driver of Amtrak Train No. 188 cruised around a sharp corner at 106 m.p.h.—more than double the 50 m.p.h. speed limit. According to an Associated Press report late last week, “Investigators have found no problems with the track, signals or locomotive.” Common sense tells you that the driver may have been at fault in some way given that the train’s black box shows that he applied the emergency brake far too late—bringing the train’s last recorded speed down to just 102 m.p.h.

However, the Amtrak driver is backed by unions. With the rare exception of an outlier like Wisconsin Governor Scott Walker, most politicians are spineless souls—afraid of their own shadows and intensely terrified of union bosses. Because union bosses can cull a raging mob.

One week before the crash, Ed Wytkind, the president of a coalition of 32 transportation unions known as AFL-CIO Transportation Trades Department urged the Senate to appropriate $324 million additional annual funds to Amtrak. After the crash, De Blasio and politicians on both sides of the aisle rushed to echo Wytkind.

Hours after the crash, DeBlasio and his friend Mick Cornett (Oklahoma City’s Republican mayor) managed to get a “bipartisan” op-ed published in the New York Times calling for a “measure that significantly increases investments from the current level of $50 billion a year.” His request is rather broad. What does De Blasio consider to be “significantly” more than $50 billion? Who knows. De Blasio is the same man who contends that every poor person has a right to live in a subsidized mansion.

To bring everything full-circle (i.e. back to him) De Blasio also managed to find time for a few tweets in the hours after the crash. One tweet linked to and promoted his New York Times op-ed begging for more taxpayer dollars. Another tweet made a similar plea:

Even the New York Times made the mistake of admitting that the train crashed because of government incompetence. On Friday morning, the Times printed an article pinpointing two weak spots within the train’s security system and both had to do with the government.

1.) “…installation of the safety system on tracks across the country was also hampered for more than a year by longstanding F.C.C. rules that required environmental and preservation reviews before the safety system’s antennas could be installed… [emphasis added]”

2.) “Money has also been an issue in implementing positive train control.”

With regard to number two, the real reason why money is an issue for Amtrak is because it has a poor business model. Amtrak insists on maintaining over a dozen long-haul routes with anemic demand. Just as McDonald’s would lose money if it insisted on opening franchises in rarely traversed desert regions, Amtrak loses money by running these lines. Lots of money. Approximately $600 million annually.

If Amtrak can’t operate safely, profitably and independently then it should be allowed to go out of business—just like McDonald’s, Apple or Disney would be compelled to do in a similar situation.

When politicians blame Amtrak’s tragic failures on a lack of Congressional funding they are really blaming you and me—the taxpayers. We are innocent bystanders; we are struggling to find jobs and pay bills; we have no obligation to hand over more of our money to Amtrak. Politicians try to paint themselves as heroes of the common man by cheering for more taxes and more laws. The truth is that an unprofitable and inefficient government-subsidized train system is at fault.