Stay-at-Home Moms are the Real World 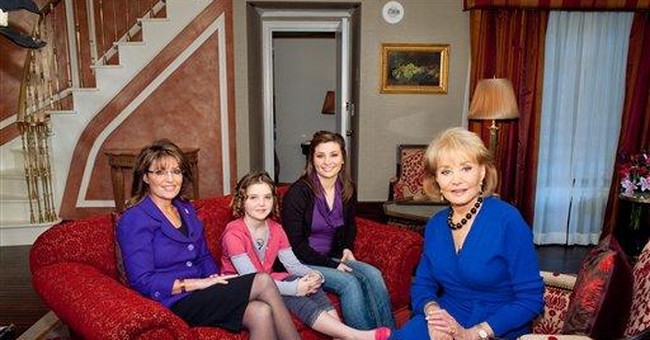 Momma, don't let your babies grow up to be stay-at-home mommas. That seemed to be the underlying bias from a popular daytime TV show. It's not a new message, but it's one that may be changing.

"She almost made it," is how Barbara Walters introduced Rachel Campos-Duffy and her husband, Sean Duffy, a congressman-elect, to the set of ABC's "The View." Campos-Duffy, a former reality-TV cast member and now author and mother of six, had auditioned for, and come close to joining, the women of "The View," years before.

Walters went on to ask, "Did you ever think, 'I wish I had a career and I didn't have six kids?'"

Without hesitation, Rachel happily responded: "Well, being a mom is the best job in the world." She said this, by the way, while her youngest, 8-month-old Maria Victoria, sat on her lap.

Knowing that she was representing a lot of women who will never make the daily talk-show circuit, Rachel later all but apologized for not saying more. She wrote on her parenting blog: "I couldn't help being disappointed with my response. Not that it wasn't true -- being a mom is the best job in the world -- but I felt that a question as culturally loaded as this one deserved a better answer." What she may not have realized is that her witness was already as powerful as any longer response would have been.

Walters also pointed out that the Capitol tastemakers at Politico have dubbed Rachel and Sean the new D.C. "hot couple." That really is quite the testament -- if "hot" is now to be the mom who stays in Wisconsin with the kids while the tea-party dad commutes from cutting spending in D.C. (I'm not that hopeful about the social pages understanding this yet -- they may still be stuck on the couple's MTV "Real World"/"Road Rules" past.)

Rachel isn't new to the type of questions asked by Walters -- I doubt any mother of six in 2010 is. Looking askance at stay-at-home mothers, ones with many children especially, may be the sexual revolution's most acceptable bias.

Walters left it out of her intro, but Rachel knows so much about this problem that she wrote a book: "Stay Home, Stay Happy: 10 Secrets to Loving At-Home Motherhood." When I interviewed her about her tome earlier this year, Rachel explained what there wasn't time to say on "The View." After her second time trying out for the show, she realized that she was already "doing what God was calling me to do -- being home, taking care of my kids." Previously, she was in a bit of a holding pattern, "waiting for my next big break." But her oldest child was 5 at the time and, she explained, "I was starting to see the fruits of my time at home with them -- their manners and sense of compassion, the things that happen when you parent well."

At the same time, though, she confronted firsthand a culture that is extremely unsupportive of the choice to stay home. She admitted: "Even if we feel good about our days and choices, we still crave that outside validation." She's fortunate enough to have a supportive husband, but realizes that not every woman does. And it can still get lonely when people feel free to provide commentary in the supermarket line, as folks still do. "I guess I hoped that by writing this book I might in a small way help elevate this noble profession," she told me.

During our interview, she went on to say: "I have made a choice to fully enjoy my kids and this particular season of my life. It's a very conscious, powerful decision. In some ways, it takes more guts to buck the financial rewards and adulation that come from a professional career to pursue something so culturally undervalued as at-home motherhood."

Therein she hit on something almost as powerful as the maternal instinct: the backlash against feminism that we're living through right now. People everywhere are admitting to a growing discomfort with a worldview that insists that women should want to "have it all," that we girls should do anything and everything.

True, you absolutely can choose not to have children and still have a fulfilling life in other ways. But for all too long now we have -- in prep schools and pop culture and in our social lives -- acted as if the woman who is a media mover and shaker or business mogul is somehow superior to the woman who moves to Wisconsin with the man she loves.

Walters implied, in an almost perversely natural way, that Rachel's life was missing something.

Women who prioritize raising their children have no reason to feel inadequate to anyone. They've got our greatest natural resource on their laps. And there is absolutely nothing to regret; there's everything to love and enjoy. That's life in the real world.