Mrs. Sanford and Sons: Guv's Wife Stands Up for Family 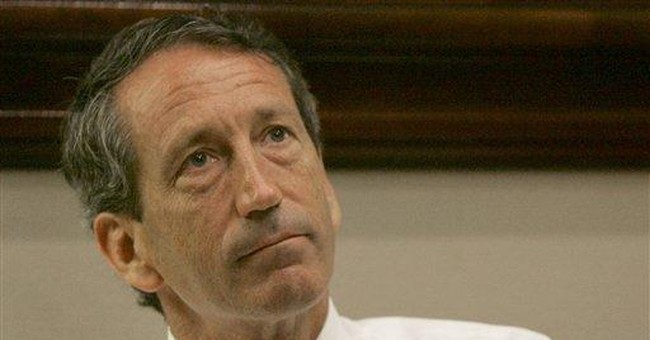 Move over, Sarah Palin? Jenny Sanford, the wife of embattled Republican South Carolina governor Mark Sanford, is attracting her own constituency. The reason behind this is easy to see.

Sanford's husband, who recently admitted to having an extramarital affair, explains that he "crossed lines" multiple times during his marriage, but only really "cheated" on his wife with one woman he shared a "love story" with. And now Mrs. Sanford has become something of a heroine, according to press reports. One friend of the wronged Mrs. Sanford told the Washington Post: "I think Jenny has not had these types of ambitions, but I think every woman in South Carolina would vote for Jenny Sanford for governor right now."

There's been a clear difference between the public statements of Mark and Jenny Sanford: only one seems to be concerned with the question of responsibility. The first lady of South Carolina, upon her husband's confession that he had jetted off to Argentina for the express purpose of a little hanky-panky, looked at duty clearly: she loves her husband and has children to protect. Mark Sanford, on the other hand, put power as his priority.

He, clearly, is a broken man. He's making lame excuses for his infidelity in his marriage, dereliction of duty as governor and misuse of power (trysting with his mistress on the state's dime). Maybe it's all desperation. I don't envy the man whose mistakes are exposed for the world to see. But he's made some choices -- to get married, to father children, to run for governor. And now, instead of The Sanford Family and State of South Carolina Show, it's The Mark Show. All Mark All the Time. Watch the Tragedy Unfold, the Man Who Could Have Been the Great Right Hope. It's as if he's taken lessons from Blago, the ludicrously corrupt and impeached former governor of Illinois turned media monster.

Across the political spectrum, Mrs. Sanford has garnered respect for not appearing at her husband's press conference and for taking the opportunity to reaffirm basic, unimpeachable values. Presumably she knew more about the story than we would that day--as more details would later be revealed -- and had reason not to trust him enough to buy in.

She would later tell reporters camped out at the end of her driveway that "his career is not a concern of mine...He's going to have to worry about that. I'm worried about my family and the character of my children."

You'd think statements like these would make Mrs. Sanford a feminist icon. Alas, she may have the right reproductive organs, but she's lacking the ideology that brands one a real woman in terms of the left's political purposes. She's a Christian Republican, after all. And she's one who embraces her role as wife and mother -- refusing to throw those responsibilities under the bus in the wake of her husband's adultery.

Tina Brown, writing on her Daily Beast Web site, spared some praise for Sanford before going for the jugular. Brown wrote: "Just when she set the table for a big-ticket matrimonial lawyer to have a payday on behalf of all the humiliated political wives ... the first lady of South Carolina blew it. She chose instead a pious manifesto that lets the governor off the hook."

Or maybe, Tina, she believes in more important things. Some of us do.

Brown quoted Mrs. Sanford: "I remain willing to forgive Mark completely for his indiscretions and to welcome him back, in time, if he continues to work toward reconciliation with a true spirit of humility and repentance."

"I believe enduring love is primarily a commitment and an act of will, and for a marriage to be successful, that commitment must be reciprocal," Mrs. Sanford wrote. (She's right, and the idea must have some fans, as she does.) Being governor of a state is also a commitment and an act of will. One involves a vow, the other an oath. Mark Sanford has kept neither. And his rambling interviews and appearances (and disappearances) provide ample reason to wonder if he's up for either job right now. His wife clearly doesn't think he can handle the husband and father part, having asked him to leave in the hopes of eventual reconciliation.

It was because of her respect for marriage -- and his confusion on the matter -- that she asked him to go. Jenny Sanford deserves credit for standing by principle.