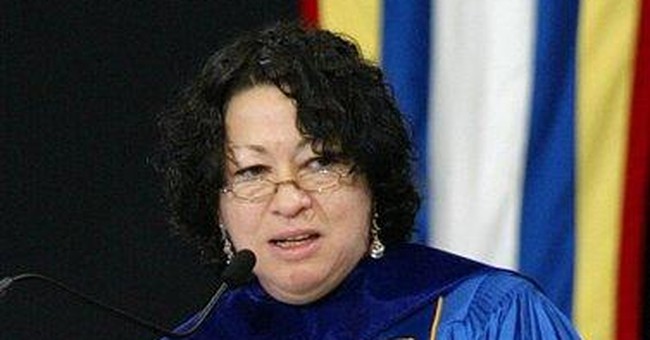 I'm not interested in belittling Sotomayor's accomplishments. Certainly, less-qualified lawyers have been nominated to the Court in the past. But her selection perpetuates a damaging type of identity politics in judicial selection. There is not a "woman's seat" on the Court: when Ruth Bader Ginsburg retires from the bench, she does not have to be replaced by a female -- or, for that matter, by a Jewish person or a former ACLU lawyer (all bills she fits). Nor will Clarence Thomas have to be replaced by a black man or Anthony Kennedy by a white Catholic male.

The next justice to possibly join the highest court in the land once said, "I would hope that a wise Latina woman with the richness of her experiences would more often than not reach a better conclusion than a white male who hasn't lived that life."

President Obama, whom we are all to believe is a transformational force on matters of race, agrees with the above statement. His standard for nominating justices is this: empathy, and maybe some political capital with an interest group. This is not transformation -- it's not even progress.

A court with nine white males or nine Hispanic women might not look like America -- but, depending on the character and intelligence of the particular judges, it might well do a good job of representing America.

Sotomayor is right when she says: "America has a deeply confused image of itself that is in perpetual tension. We are a nation that takes pride in our ethnic diversity, recognizing its importance in shaping our society and in adding richness to its existence." But cultural distinction alone should not be the primary requirement for serving on the Supreme Court; Sotomayor's Hispanic background should not make her a shoo-in -- just as the fact that Nancy Pelosi is the first female House speaker should not make her any less accountable for her words and actions than a male speaker.

So often, in talking about race and the American dream, we return to the words of Martin Luther King Jr. In his famous speech on the National Mall, he said to a crowd of fighters for racial justice: "We must forever conduct our struggle on the high plane of dignity and discipline." He spoke of "all of God's children" singing a song of freedom together, when the chains of racism would be broken.

Those chains are not broken -- indeed, they are made stronger -- when we encourage division of the kind we have seen in the discussion of the Sotomayor nomination, and seen even in the 2005 nomination of Harriet Miers. Supreme Court Judge Samuel Alito is God's child, too -- and he was also a damn good lawyer. But let's not forget that he was ultimately nominated because, back in 2005, the "chick card" backfired. We'll be able to sing that song King was hoping to hear when candidates aren't proffered because of their race, gender or even sexual orientation.

In his inaugural speech this past January, President Obama borrowed from the Bible and declared, "The time has come to set aside childish things." He proclaimed, "The time has come to reaffirm our enduring spirit; to choose our better history; to carry forward that precious gift, that noble idea, passed on from generation to generation: the God-given promise that all are equal, all are free, and all deserve a chance to pursue their full measure of happiness." He proclaimed "an end to petty grievances."

Let's look at the Sotomayor nomination with that standard in mind. In a speech in 2001, Sotomayor counted heads on state and federal courts, and she lamented the 11-year gap between Sandra Day O'Connor's appointment to the Supreme Court and Ginsburg's. Could grievances be pettier than these? This is the same kind of poison that kept Miguel Estrada off the federal bench because he was not "Hispanic enough."

Shouldn't we put away these childish things?