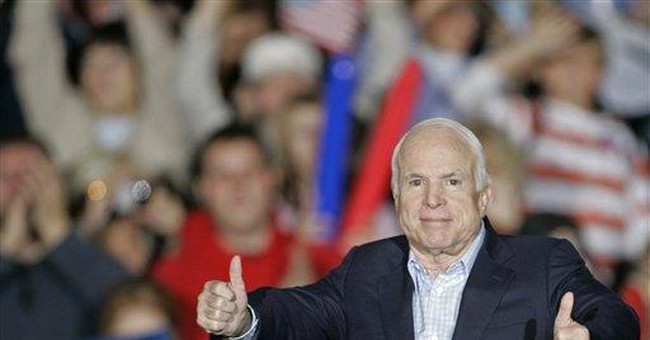 My husband called it first. Then, a brilliant, 75-year-old scholar and raconteur confessed to me over wine: "I'm sexually attracted to her. I don't care that she knows nothing."

Finally, writer Robert Draper closed the file on the Sarah Palin mystery with a devastating article in this Sunday's New York Times Magazine: "The Making (and Remaking) of McCain."

McCain didn't know her. He didn't vet her. His campaign team had barely an impression. In a bar one night, Draper asked one of McCain's senior advisers: "Leaving aside her actual experience, do you know how informed Governor Palin is about the issues of the day?"

The adviser thought a moment and replied: "No, I don't know."

McCain had met Palin only once -- in February, at the governor's convention in Washington, D.C. -- before the day he selected her as his running mate. The second time was at his Sedona, Ariz., ranch on Aug. 28, just four days before the GOP convention.

As Draper tells it, McCain took Palin to his favorite coffee-drinking spot down by a creek and a sycamore tree. They talked for more than an hour, and, as Napoleon whispered to Josephine, "Voila."

One does not have to be a psychoanalyst to reckon that McCain was smitten. By no means am I suggesting anything untoward between McCain and his running mate. Palin is a governor, after all. She does have an executive resume, if a thin one. And she's a natural politician who connects with people.

But there can be no denying that McCain's selection of her over others far more qualified -- and his mind-boggling lack of attention to details that matter -- suggests other factors at work. His judgment may have been clouded by ... what?

Science provides clues. A study in Canada, published in New Scientist in 2003, found that pretty women foil men's ability to assess the future. "Discounting the future," as the condition is called, means preferring immediate, lesser rewards to greater rewards in the future.

Drug dealers, car salesmen and politicians rely on this affliction and pray feverishly for its persistence.

The Canadian psychologists showed pictures of attractive and not-so attractive men and women to students of the opposite sex. The students were offered a prize -- either a small check for the next day or a larger check at some later date.

The men made perfectly rational decisions, opting for the delayed larger amount after viewing the average-looking women. You know where this is going. (Women, by the way, were rational no matter what.)

That men are at a disadvantage when attractive women are present is a fact upon which women have banked for centuries. Ignoring it now profits only fools. McCain spokesmen have said that he was attracted to Palin's maverickness, that she reminded him of himself.

Recognizing oneself in a member of the opposite sex (or the same sex, as the case may be) is a powerful invitation to bonding. Narcissus fell in love with his own image reflected in the river, imagining it to be his deceased and beloved sister's. In McCain's case, it doesn't hurt that his reflection is spiked with feminine approval.

As my husband observed early on, McCain the mortal couldn't mind having an attractive woman all but singing arias to his greatness. Cameras frequently capture McCain beaming like a gold-starred schoolboy while Palin tells crowds that he is "exactly the kind of man I want as commander in chief." This, notes Draper, "seemed to confer not only valor but virility on a 72-year-old politician who only weeks ago barely registered with the party faithful."

It is entirely possible that no one could have beaten the political force known as Barack Obama -- under any circumstances. And though it isn't over yet, it seems clear that McCain made a tragic, if familiar, error under that sycamore tree. Will he join the pantheon of men who, intoxicated by a woman's power, made the wrong call?

Had Antony not fallen for Cleopatra, Octavian might not have captured the Roman Empire. Had Bill resisted Monica, Al Gore may have become president and Hillary might be today's Democratic nominee.

If McCain, rightful heir to the presidency, loses to Obama, history undoubtedly will note that he was defeated at least in part by his own besotted impulse to discount the future. If he wins, then he must be credited with having correctly calculated nature's power to befuddle.