Justin Haskins
|
Posted: Jun 04, 2018 12:01 AM
Share   Tweet
The opinions expressed by columnists are their own and do not necessarily represent the views of Townhall.com. 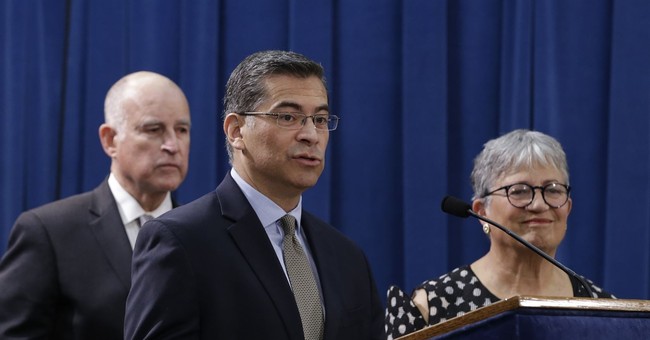 California Logic: Nothing says “tolerance” like imposing a travel ban in an attempt to force another state to require religious groups to violate their deeply held beliefs.

On Friday, the attorney general of the People’s Republic of California announced the state will soon ban state-funded and state-sponsored travel to Oklahoma because of its allegedly “discriminatory” adoption laws. In May, Oklahoma approved legislation that ensures “no private child-placing agency shall be required to perform, assist, counsel, recommend, consent to, refer, or participate in any placement of a child for foster care or adoption when the proposed placement would violate the agency’s written religious or moral convictions or policies.”

The purpose of the law is to protect faith-based adoption agencies—which, in many states, remain vital players in helping thousands upon thousands of kids find permanent homes every year—from being compelled to participate in activities that contradict their values. Because some religious groups believe they have a moral and religious responsibility to place children in homes with a married mother and father—as opposed to with single parents, transgender parents, or gay couples—California has determined Oklahoma’s law protecting these groups is “discriminatory” and a form of “bigotry.”

“California will not use state resources to support states that pass discriminatory laws,” California Attorney General Xavier Becerra said on Friday. “The law enacted in Oklahoma allows discrimination against LGBTQ children and aspiring LGBTQ parents who must navigate the adoption process.”

California social justice warriors like Becerra say they “are taking a stand against bigotry and in support of those who would be harmed by this prejudiced policy.” In reality, all they are doing is trying to score political points with their far-left-wing supporters, to the detriment of parentless kids everywhere.

California lawmakers might not like it, but tens of millions of Americans worship God and support faith-based community initiatives meant to help those in need, including children without homes. These organizations, of which there are thousands across the country, must adhere to their religious beliefs. If they are forced to violate their values, most of them will inevitably close their doors, leaving millions of people without services these charities are compassionately providing.

Although Becerra and the other tyrants currently running much of California’s government won’t admit it publicly, shutting down all faith-based services—or forcing them to abandon their most unpopular beliefs—is exactly what they want. And they are more than willing to sacrifice the countless kids who are waiting to find families in Catholic, Lutheran, Methodist, Presbyterian, Muslim, and other religious homes on the Left’s Alter of Political Correctness.

Fighting discrimination is important, and it might be reasonable for California to enact a travel ban to fight against a truly discriminatory policy. For instance, had Oklahoma passed a racist law mandating “white only” adoption or forbidding gay couples from adopting children at all, California and other states would have a moral obligation to stand firmly against such provisions. But as Oklahoma Gov. Marry Fallin noted, Oklahoma’s religious liberty law is absolutely not discriminatory.

Oklahoma “will not be in any way restricting current practice allowing LGBTQ individuals and couples fostering or adopting,” Fallin explained. “It does not ban same-sex adoption or foster care in Oklahoma. Instead, the bill will help continue Oklahoma’s successful placement of children with a broad array of loving families and basically maintain the status quo by setting forth in statute practices which have successfully worked for the best interest of Oklahoma children.”

Contrary to the claims made by Becerra, Oklahoma’s law, like other similar state laws, is merely meant to protect religious groups by guaranteeing their right to follow their conscience. It’s no different than the laws that permit the Amish to escape having to participate in a slew of government programs and mandates they disagree with. Or the laws that allow pacifists to avoid the military draft. Or the exemptions that protect Roman Catholic nuns from paying for abortion. Or the laws that protect some religious groups from having to swear oaths.

If leftists have it their way, the Amish would be forced to abide by the same rules, taxes, and regulations everyone else must adhere to. Pacifists would be forced to participate in drafts and fight and die on battlefields. Nuns, Protestant pastors, rabbis, and Muslim clergy would be required to pay for abortions.

In other words, all religious beliefs would be abolished from the public square because of their “discriminatory” nature. And who gets to decide what is “discriminatory,” anyway? Well, the majority of people in society, of course, which means all minority groups would be at risk of being forced to live in ways they vehemently oppose.

One of the primary reasons America has become so wildly successful is its commitment to religious tolerance. Tens of millions of people from around the world have flocked to the United States to worship God. Sometimes, that means people have been allowed to act in ways some of us disagree with. The Left is, apparently, incredibly frightened by this religious freedom, and many leftists are working to end it forever and enact instead a completely unoriginal, uniform, dull society composed of single-minded drones.

Rather than embrace tolerance, leftists in California and elsewhere are seeking to destroy it. And, ironically, they are engaging in this attack on religious liberty in the name of protecting “diversity.” Don’t be fooled: the far Left doesn’t want diversity. It’s probably the thing they are most afraid of.

Justin Haskins (Jhaskins@henrydeaborn.org) is a research fellow for The Henry Dearborn Institute for Liberty.