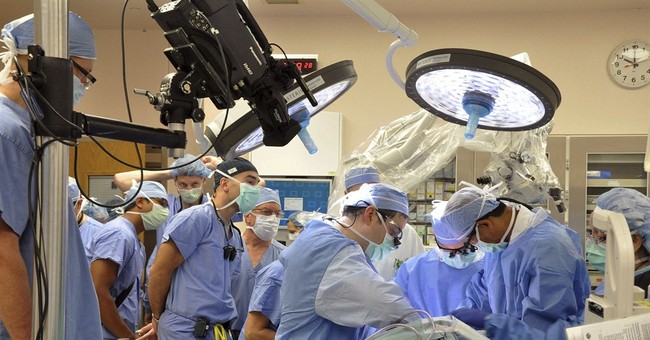 Few government policies are as destructive or as poorly understood as certificate of need (CON) laws. A CON law creates a state regulatory agency that requires medical facilities to get permission from the agency in order to purchase new equipment, offer medical services, or to expand or build a medical facility. Thirty-six states currently have CON laws on the books, and each one has a unique set of requirements that drive up health care costs, reduce access to quality medical care, and create artificial market shortages.

In Florida, an ongoing legal battle between hospitals has brought the state’s CON laws into the spotlight and has helped illustrate why these onerous government mandates should be rejected in favor of reasonable, free-market reforms that encourage competition and reject corporate favoritism.

In a recent decision by the state’s 1st District Court of Appeals, Judges Scott Makar, Stephanie Ray, and Ronald Swanson, ruled Ed Fraser Memorial Hospital, located in Baker County, should get another opportunity to fight against a ruling issued by a lower circuit court that previously dismissed its challenge against a decision made by Florida’s CON agency, the Agency for Health Care Administration (AHCA).

The controversy started when a medical group announced plans to build the West Jacksonville Medical Center (WJMC) in Jacksonville, Florida. St. Vincent’s Hospital, another medical center in Jacksonville, objected to WJMC and a legal battle between the two medical groups ensued. Lawsuits frequently accompany the building of many new large health care facilities, as existing hospitals fight to keep competition out of their market.

Ed Fraser Memorial sued, arguing AHCA overstepped its authority by delaying the validity period of the certificate of need. In other words, AHCA created powers for itself out of thin air because WJMC and St. Vincent’s Hospital agreed those were the terms they wanted. Rather than do what’s best for the people of Florida, AHCA did what was best for the two wealthy, powerful medical groups.

In the decision, written by Makar, the judges agreed, “[W]e find no principle of law allowing an agency, even one with the gravity of AHCA’s charge, to exceed its delegated statutory authority simply because private parties to a settlement agreement deem it mutually beneficial. This point is particularly important because agreements of competing health care companies raise antitrust concerns, making it important that a state’s regulatory actions – including issuance of certificates of need – are pursuant to clearly articulated and affirmatively expressed legislative directives.”

The legal battle still isn’t over – the case will go back to a circuit court for a final decision – but the case illustrates the tremendous power, as well as the potential abuse that comes with it, held by CON regulatory agencies such as AHCA.

CON laws are supposed to keep health care costs down by preventing the creation of superfluous services, facilities, and expenses related to unnecessarily large medical staffs. The idea a government agency would be better at managing the health care industry than the experts in the medical industry who are looking to increase profits is laughable and has been completely disproven.

Christopher Koopman and Thomas Stratmann, scholars at the Mercatus Center at George Mason University, released the results of their nationwide study of CON laws in 2015 and found the promises made by regulators “have failed to materialize” and CON regulations have actually created a number of artificial, government-created problems in the health care marketplace, including in Florida.

Koopman and Stratmann conclude, “For those seeking quality health care throughout Florida, [the existence of CON laws] means less competition and fewer choices, without increased access to care for the poor.”

Although CON laws are supposed to control costs, some studies show CON programs increase costs by 5 percent, and virtually all studies show they reduce access to necessary services, including in nursing homes, which have often been prevented from expanding or improving facilities in states that use CON agencies to regulate them.

Only the largest medical facilities already in existence seem to benefit from CON laws, because they are able to take advantage of them as a tool to keep competition, which is necessary in a free-market to drive innovation and reduce costs, out of a marketplace. Meanwhile, patients – many of whom have never even heard of CON laws – suffer from inadequate care.

Although CON laws are typically established by well-intentioned legislators, they are nothing more than ill-conceived, unwanted government controls that do nothing to help consumers while protecting existing multi-million dollar medical facilities from healthy competition. Florida should dump CON laws and embrace free-market reforms that have helped to make the United States the world’s