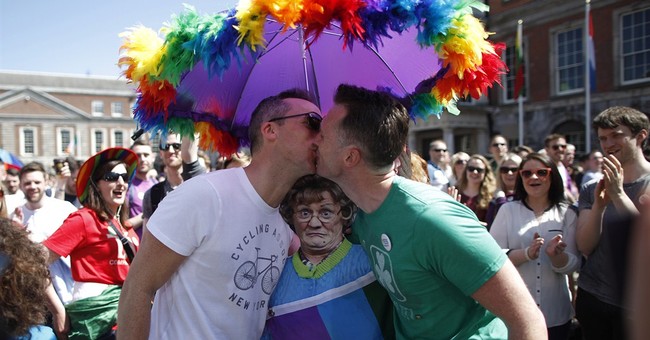 Politics today seems to be dominated by an “either you’re in or you’re out mentality.” If you’re a good Republican, a good Christian, and a good conservative, then you really can’t support gay marriage—at least, that’s what I’m constantly being told.

“We can’t redefine an institution that’s been around for thousands of years,” opponents of marriage equality say. “To do so would be to radically transform the way society has always understood marriage. That’s just not what conservatism is all about.”

But is that really true? It seems to me the heroes of the modern conservative movement— individuals such as George Washington, Thomas Jefferson, and John Adams— radically transformed the way the world had always understood how society should be organized.

I’m sure they were told, “You can’t possibly be willing to overthrow an institution that’s been in existence in Europe for over 1,000 years, can you?”

To suggest that because a particular institution in society is old, we ought not to examine its moral underpinnings is to call into question the entire Revolutionary War, the Protestant Reformation, and the movement to eliminate the slave trade from Western Civilization.

When I look back at human history, I don’t see those who I and those on my side of the political aisle consider to be heroes to be the sort of people who felt restrained and imprisoned by the institutions of the past. Rather, I see a generation of Americans who stood up to tyranny in a moment in history when so few were willing to do so.

It’s from that perspective that I have always approached the issue of whether or not gay couples should be afforded the liberty to be married, and I continue to have a difficult time understanding why so few of those who share my values in virtually all other areas of life remain unwilling or unable to see the gay marriage debate for what it is: a struggle against government control.

When fellow Tea Partiers like former Gov. Mike Huckabee (R-Ark.) suggest that real conservative values mandate the opposition to same-sex marriage; when presidential hopeful Ben Carson refers to homosexuality as a choice; and when Sen. Ted Cruz (R-Texas), along with 57 other Republicans, sends a letter to the U.S. Supreme Court urging it to permit state bans on gay marriage, I can’t help but feel as though my values—the very same beliefs all conservatives hold together—are being betrayed in the most egregious of ways.

“That’s not what we believe!” I want to shout to the world.

True supporters of liberty believe that regardless of your race, your religion, your gender, and even your sexual orientation, freedom still belongs to you. It is your inalienable right that no one, especially not government bureaucrats and politicians, have the right to take away from you.

If one’s principles are truly founded upon the rock of liberty, there is no justifiable reason for preventing consenting adults from engaging in loving relationships, regardless of whether or not those relationships are considered to be in line with Christian morality.

Committing adultery, drunkenness, taking the Lord’s name in vain, lying, and engaging in pre-marital sex are all considered to be morally dangerous actions by virtually all of those who wish to see gay marriage halted. Yet, I am not aware of a single respected conservative politician who believes that any of those behaviors should be outlawed by the government nationally. It’s widely understood that although these behaviors may be immoral in the minds of many people, so long as individuals’ actions are not harming others they should generally be allowed.

The only exception seems to be with gay marriage.

This isn’t to say that I’m the only self-identified American conservative who believes in marriage equality. There is a growing contingent of individuals who insist that the belief in limited government be extended to marriage as well. A 2014 Pew Research pollindicated more than 60 percent of young Republicans support same-sex marriage. Additionally, for the first time in recent memory— and perhaps ever—a legitimate challenger for the Republican presidential nomination, Sen. Rand Paul (R-Ky.), adamantly rejects the notion government should be involved in the marriage business at all, a position I agree with completely.

It’s undeniable the tides in the gay marriage debate have clearly shifted in favor of those who believe in personal freedom, and it’s only a matter of time before the nation as a whole comes to one mind on this issue.

Until that occurs, I believe it is the responsibility of all those who support absolute freedom to stand against those who seek to use the power and authority of the governments of the United States to force others to adhere to particular moral standards, regardless of whether you believe those moral standards are valid.