Julio Rivera
|
Posted: Jun 20, 2018 12:00 PM
Share   Tweet
The opinions expressed by columnists are their own and do not necessarily represent the views of Townhall.com. 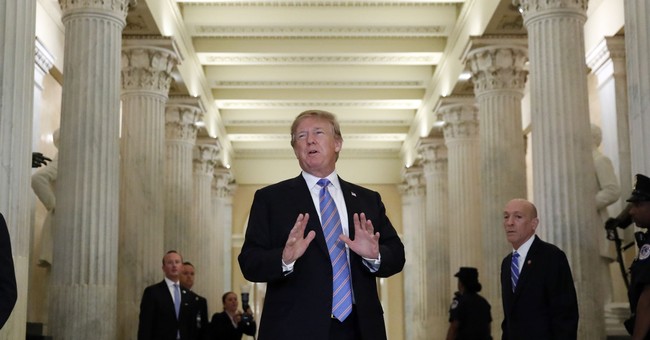 House Republicans are currently reviewing the merits of 2 equally flawed immigration bills. Sometimes, it seems as the message that resonated globally with the election of President Donald Trump has been lost on the group of legislators most vital to the execution of the Trump agenda.

It’s as if the coast to coast chants of “Build the Wall” started at the countless Trump campaign rallies nationally, fell on deaf ears in the lower chamber of Congress. When Deputy Whip Rep. Patrick McHenry (R-NC) recently stated that the House wouldn’t tackle immigration legislation unless President Donald Trump supports it, a collective feeling of disappointment fell over the pronounced voter base of immigration hawks nationally.

Of course, he supports it! It was the central theme of his presidential campaign. In fact, on numerous occasions, Trump even challenged congressional democrats to work with republicans to come up with a solution on the Deferred Action for Childhood Arrivals (DACA) program.

It is as if the democrats willingly allowed for the issues related to illegal immigration to go unchecked in an effort to politicize its collateral damage in time for what is expected to be a contentious midterm election in November.

Recently, political talk shows and social media sites have been set ablaze regarding the imagery related to the separation of families knowingly engaging in illegal efforts to enter the United States. Many of the children currently in US custody were sent by their parents alone, and the issue of how to handle these children, along with others who have been temporarily separated from their parents who willingly defied US immigration laws, has come to the forefront.

Right on cue, and in harmonious synchronization, the left has used the opportunity to continue to perpetuate the false “Trump/Republicans are Racist” narrative. The left has little use for the rule of law and the fact that the Justice Department cannot legally prosecute children along with their parents leading to sharp rise in temporaryfamily separations. Almost 2,000 illegal immigrant children were separated from parents during a six-week period in April and May.

A footnote to the Executive Summary created by The Office of the Inspector General (OIG), Evaluation and Inspections Division, after a review of the treatment of unaccompanied illegal juveniles held in the custody of the Immigration and Naturalization Service (INS) after the Flores Consent Decree of 1997, clearly states, “An influx condition is one of the justifications the INS can use to place a juvenile in a secure facility.”

These protocols were put in place initially during the Clinton Administration, and have continued mostly unobstructed for over 20 years. Back when this Executive Summary was prepared, an “influx condition” was defined by the Flores Consent Decree as “a situation when the INS has more than 130 juveniles eligible for placement in a shelter facility.” Due to the irresponsibility in addressing our problems with illegal immigration over the subsequent 20 plus years, the number of detained children has only multiplied many times over.

Monday, at the National Sheriffs’ Association conference in New Orleans, United States Attorney General Jeff Sessions clearly stated, "We do not want to separate parents from their children."

Sessions also stated that since the word got around prior to Trump taking office that illegals attempting to cross the border with a minor would almost certainly be “given immunity from prosecution,” the result was, “The number of aliens illegally crossing with children between our ports of entry went from 14,000 to 75,000 — that’s a five-fold increase — in just the last four years.”

The left’s crazed obsession with attacking conservative commentators for laying out the truth in this issue has led to a renewed interest by her detractors like Parkland shooting survivor, David Hogg, in unfairly attacking Fox News host Laura Ingraham. Her comparison of the juvenile detention center being similar to a “summer camp,” was far more accurate than the comparison being made by many on the left that the conditions resemble a concentration camp. The concentration camp comparison is insensitive, anti-Semitic and tantamount to holocaust denial.