Can School Choice Save A Stagnating Economy?

Julian Adorney
|
Posted: Feb 22, 2017 12:01 AM
Share   Tweet
The opinions expressed by columnists are their own and do not necessarily represent the views of Townhall.com. 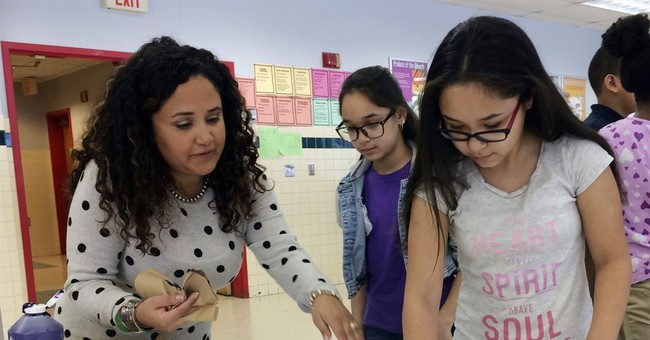 In the Huffington Post, Dale Hansen sums up many liberals’ views when he claims, “The recent appointment of Betsy DeVos has proved one thing - conservatives are far more concerned about politics than they are about educating children.” But the competitive education reforms that Devos champions are essential to giving kids the skills to thrive in a global economy.

Median wages in the US have stagnated, but liberals who decry this fact ignore a root cause: a mismatch between the skills that students acquire in school, and the skills that they need to thrive in the workplace. Jobs in many sectors keep commanding higher salaries: IT wages rose 18.4 percent from 2011 to 2015. The problem, as renowned economist Tyler Cowen notes in Average Is Over, is that our economy leaves behind people who lack the skills to compete in these sectors. And traditional public schools are still focused on outdated classes like cursive writing, in lieu of preparing students for the economy of the future.

The U.S. needs an education system that’s as dynamic as the market our kids will enter, where new technologies can spring up overnight and render old ones obsolete. The warehouse model of one teacher lecturing to 20-30 students, which has remained almost unchanged since its importation from Prussia in the 19th century, is no longer working.

Unfortunately, traditional public schools are structurally opposed to adaptation. Investing in new teaching methods and technologies is expensive, and public schools have little incentive to innovate so long as they have a captive audience of students. Innovation also requires displacement; the process of creative destruction requires tearing down the old in order to build something new. This process is difficult when impossible-to-fire bureaucrats benefit from the status quo. Finally, adaptation requires the freedom to experiment. But public school systems are monopolies with top-down controls, from No Child Left Behind to Common Core. When a handful of political appointees in DC set education policy for 56 million students, it reduces the potential for innovation.

Public school teachers, who can be mediocre or extraordinary, are hardly to blame for this situation. It’s the consequence of a bureaucratic system in which incentives favor the status quo.

By contrast, private schools and charter schools, both of which DeVos has championed, have more freedom to experiment with new ideas. AltSchool, founded by a former Google executive, uses cutting-edge technology and individualized lesson plans to help kids pursue their passions. Other schools focus on Socratic dialogue or self-paced learning. KIPP charter schools create remarkable results by expanding the school day and requiring parental buy-in.

The result is students who are better educated and more prepared for a dynamic economy. Students in charter schools in Florida, for instance, earned an average of 12 percent more by their mid-twenties than students in traditional public schools; even after controlling for selection bias.

Studies also consistently show that charter and private schools offer a fuller education than public schools, because they’re directly accountable to parents —who have the most investment in their kids’ education.

Unfortunately, our current system erects barriers to these innovations. Without private school voucher programs, parents who want to send their kids to private schools like AltSchool pay twice: once to the government, and once to the institution that actually educates their children. This artificially raises the price of private schools, diminishing enrollment. Similarly, states that outlaw charter schools deny students access to these often cutting-edge educational models.

This phenomenon even hurts public schools. According to the Friedman Foundation for School Choice, of 33 studies that analyzed the effect of competition on public schools, 31 found that public schools improved. When institutions have to earn their audience, they find ways to improve; when they’re protected from competition, they stagnate.

Betsy Devos’ reforms will reduce these barriers and create a more level playing field in the education market. The resulting competition will give our kids their best chance at thriving in a dynamic and rapidly-evolving economy.