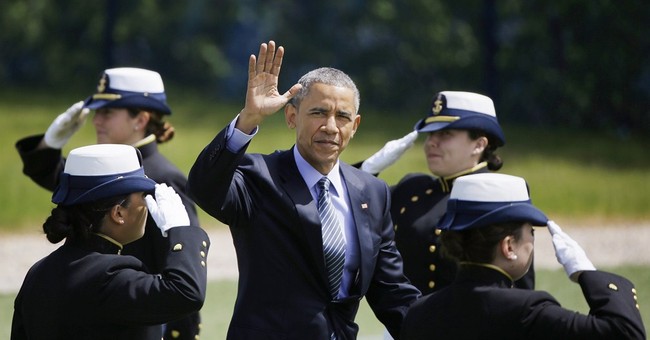 Our President and the United Nations fear climate change far more than ISIS, and if this weren’t true, these officials could readily defeat this Islamist threat.

At the recent US Coast Guard graduation, immediately after the devastating loss of Ramadi, President Obama spent an entire speech lecturing our military men and women that climate change is the biggest threat facing our nation and “an immediate risk to our national security."

It is almost like he was saying we should send the Coast Guard and Marines to attack and defeat those menacing carbon dioxide molecules once and for all.

While that statement seems ridiculous, actions speak louder than words, and President Obama is exerting more world leadership fighting climate change than defeating ISIS. As Islamic militants saw off heads of their captives and murder their victims by the thousands, the UN’s and our President’s top world priority is the disputed threat of climate change.

Basic human rights should come before environmental activism. Both the Obama administration and the UN are largely ignoring the fact that nearly all of the Islamic-majority nations, as well as ISIS, are blatantly violating the UN’s Universal Declaration of Human Rights (UDHR).

While all member states should be required to sign this essential declaration, the world’s 56 Islamic countries have instead crafted their own Islamic version, based on sharia law and in direct conflict with the UDHR.

President Obama loves working with the UN, yet he refuses to use the UN’s own declarations to crack down on Islamic violence and ISIS. According to most military experts, it is well within the US’s capability to eliminate the ISIS threat militarily within a matter of months. This is the first important step that needs to be taken in the battle against this rogue terrorist group.

But tackling ISIS militarily is only attacking the symptom and not the root cause, and it won’t eliminate the spreading cancer of the violent Islamic ideology that fuels it and attracts its followers.

What few people understand is that the religion of Islam and its religious law, the sharia, violates almost every one of the 30 Articles of the UDHR. The member states of the Organization of the Islamic Conference, 56 in total, enacted their own Cairo Declaration on Human Rights in Islam (CDHRI) in place of the UDHR in 1990. In the CDHRI, everything in the document, including all “rights” and “freedoms” mentioned in it, are subject to Islamic sharia, which is the declaration's sole source.

While they use the term “human rights,” Islamic sharia law is in fact the absolute antithesis of human rights as understood by the rest of the civilized world and encoded in international law.

Here are just a few examples of the barbaric and violent dictates of Islamic sharia: violent warfare against unbelievers for the sake of Islamic rule is mandatory; there is no freedom of religion, freedom of conscience, or freedom of speech; gays, apostates and critics of Mohammed, Islam, or sharia are punished by death; women have extremely limited rights and can be raped and beaten by their husbands; and outlandish punishments are required, including torture, crucifixions of highway robbers and amputations for theft.

As Sister Hatune Dogan, a Catholic nun running a foundation helping the poor and persecuted in 35 countries, said recently: “…Islam is not peace, please. Whoever says ISIS has no connection to Islam or something like this is, he's a liar. ISIS is Islam; Islam is ISIS".

It’s time to finally confront this root cause of ISIS. That is why we must insist and demand that the 56 Islamic countries in the world sign and demonstrably enforce the UDHR in their countries. The religious beliefs of Muslims cannot be used as a cover or an excuse to permit Islamic countries to ignore accepted human rights laws under the banner of their CDHRI.

The followers of ISIS, and the countless other Islamic terror groups, get their beliefs from somewhere, and that somewhere is in the mosques, religious schools and from extremist preachers online.

The world needs Islam to reform itself to accept the primacy of human rights as written within the UDHR of 1948. From secular laws down to social norms and religious laws, Islam itself needs to change and condemn bigotry and violence in any and all forms to be accepted within the community of nations, and to stem the tide of violence emanating from within its borders.

If the President and the UN really want to save the world, they should start with enforcing the UDHR—not with lecturing our soldiers to fight climate change.