The Tsunami and the Helicopter

Joy Overbeck
|
Posted: Sep 13, 2016 12:01 AM
Share   Tweet
The opinions expressed by columnists are their own and do not necessarily represent the views of Townhall.com. 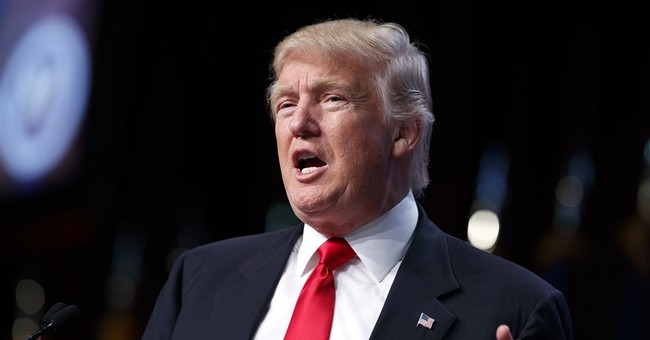 You are on a beach. You see out to sea a towering tsunami wave, roaring in fast. Overhead suddenly you hear a helicopter. It’s bobbing and weaving, black smoke trailing from its engine. The copter drops a rope ladder down to you. Do you grab the ladder, or stand there and wait for the killer tsunami?

The beach is America and the tsunami is the great destruction Hillary Clinton will wreak on America, continuing the damaging Obamatization of our once-great nation.  The wobbly helicopter is Donald Trump. We should all grab the ladder my friends.

I’m afraid that Trump haters, including the high foreheads on TV and in “conservative” magazines, are in full rampant denial about what a Hillary presidency would actually bring. Instead, they are obsessed with his personality flaws, his bankruptcies, and his sometimes unfortunate way of expressing himself. To them, he is just an obnoxious doofus – which is sometimes the case, though not lately. Certainly he is not their dream candidate. But he is the reality candidate and it’s time to stop the dreaming.

Trump’s critics don’t seem to grasp the big picture; the enormity of her outlaw behavior versus his small ball.  Donald Trump has never sold out America’s strategic uranium to Russia for $145 million donated to a fake charitable foundation. He has never exposed America’s crucial security secrets to foreign bad-guy hackers bent on harming our nation. He has never put those national secrets on a secret homebrew server obviously with the intent to conceal them from Freedom of Information requests from justice organizations like Judicial Watch.

He has never abandoned American heroes on a foreign battlefield and then lied to the parents of the dead as their bodies were unloaded behind him. He has never said he wants to bring to our shores 65,000 unvetted immigrants from countries whose people include Islamic terrorists sworn to destroy us. He has never viciously slandered fully one-quarter of this nation’s citizens as a “basket of deplorables; racist, sexist, xenophobic, homophobic, Islamophobic… Hillary Clinton has done all these things.

It’s all about scale. Compared to Hillary, Trump is truly The Apprentice in the corruption sweepstakes.  Those who like to pretend there is not a whisker of difference between these candidates are seriously deluded.

This is what will happen if Hillary is victorious in November and gains more power than any human being in the world.

--The dangerously bad Iran nuke “deal” will stand unaltered, with our taxpayers paying billions to help the mullahs fund terrorism around the world, while the Islamic nation is even now cheating and pursuing its nuclear program and humiliating us everywhere they can get away with it. Which is everywhere. The laughable Red Line in Syria? The cowardly refusal to protect Eastern Europe with a nuclear shield in Poland? Abandoning our Americans in Benghazi? Hillary Clinton as secretary of state crafted these catastrophes and more; and you betcha the debacles would continue under her presidency.

-- The Rule of Law already gutted by Obama and his loyal minions will be all but eliminated if Hillary is president. Everyone can see how for seven-plus years Obama has been dismantling the foundation of our legal system which pledges to guarantee all people equal treatment under the law. His Executive Orders violate the constitution and the courts have often, though not always, struck them down. The administration has used the highest legal authorities in the land to oppress and torment its ideological opponents. The IRS under Lois Lerner’s orders ignored the applications of Tea Party and other liberty groups for nonprofit status and her illegal actions helped re-elect Barack Obama. The most egregious example is unfolding before our eyes. Bill Clinton unethically met with the Attorney General just as his wife’s criminal activity was being investigated by the FBI. Director Comey then offered up a breath-taking litany of Hillary Clinton’s prosecutable offenses and then pronounced her not prosecutable. The din of dropped jaws is heard throughout the land as we learn the name Clinton means immunity.

-- Hillary will not secure our borders from illegal invaders including the criminals, drug dealers and illegal immigrants who do in reality take American jobs – that is, if construction, landscaping, plumbing, electrical, and other trades  are American jobs. Trump’s wall is not an outrageous or original idea. About 70% of Republicans and 51% of Americans overall approve of it. In fact, a “double layer” border fence was actually authorized by Congress in 2006 in the Secure Fence Act, and funded by 1.2 billion in a budget measure also passed that year.  Later changed by Congressional Republicans terrified of being labeled racist, somehow it never got done. Hillary has said she will welcome 65,000 mostly Muslim refugees whose extensive vetting will include being asked searching questions such as, “Are you a terrorist?”  Donald Trump knows this is nonsense and wants a temporary halt to refugee immigration until we can come up with a realistic and effective vetting system.

-- Hillary and the Democrats are gleeful about morphing the Supreme Court from its current 50/50 liberal/conservative to an overwhelming liberal majority that will last for decades. Among the resulting moral and Constitutional atrocities: The religious rights upon which this nation was founded will be further crushed. We will see Christianity and Christians further persecuted and forced to violate their faith, under the government’s guise of upholding “gay rights”, “transgender rights”, and other as yet unknown rights still to be invented by the new 1 to 3 liberal Supreme Court justices that Hillary will appoint. We’re not talking gay wedding cakes here; already pastors are being pressured to perform same sex nuptials.

--The Obama obsession with destroying fossil fuels and increasing Americans’ heating and cooling costs would continue under Clinton. Not content with annihilating the coal industry, the enforcement of their leftist anti-energy scheme got a boost in March when Attorney General Loretta Lynch testified before Congress that her “Justice Department” is considering telling the FBI to investigate civil action against the fossil fuel industry for their alleged part in carbon emissions that the administration claims contribute to global warming. No deviation from the liberal codebook will be tolerated, even if hundreds of scientists are waking up to the fake warming stats. Is arresting drivers for their vehicles’ carbon emissions next? This is the dangerous suppression of alternate views using the hammer of tyrannical government enforcement usually only seen in dictatorships. We will see it again in Hillary Clinton.

-- Obamacare will keep pounding Americans with astronomical premiums and deductibles now up to $6,000 for many, instead of saving $2500 per family as Obama falsely promised. We will see more and more people unable to get insurance because insurance companies must drop out of the exchanges to avoid going bankrupt. We will see more drastic healthcare rationing as happens in other government-run healthcare systems, because denying care to the older and the sicker is the only way to contain costs. Hillary will seize Obamacare’s failure to force single-payer, doubling down on disaster.

--Like your guns? Clinton will decide if you can keep them. Hillary hates guns and has criticized Supreme Court decisions that overturn local (Chicago and Washington D.C.) gun bans and upholding the individual’s right to own firearms under the Second Amendment. But these are 4-5 decisions. Once Clinton’s  justices control the Supreme Court those rights will be up for grabs. Gun grabs.

The tsunami is getting closer, people. Can you hear it roaring into shore? Look up; the Trump Copter is hovering. Grab that ladder. Do it now.