Tiananmen Square Should be Trump’s Waterloo

Joy Overbeck
|
Posted: Mar 14, 2016 12:01 AM
Share   Tweet
The opinions expressed by columnists are their own and do not necessarily represent the views of Townhall.com. 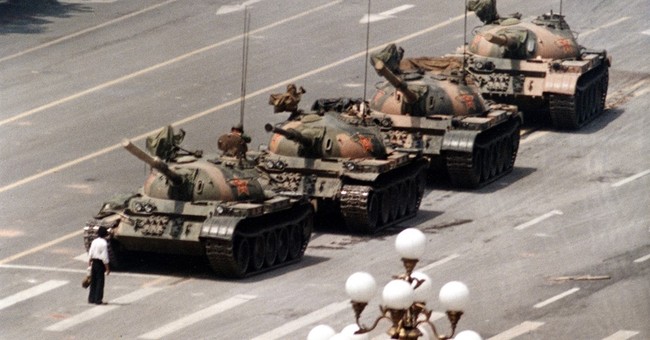 At last Thursday’s Republican debate Donald Trump offered barely veiled admiration for the “strong, powerful government” of Communist China that “kept down the riot” of thousands of unarmed citizens demonstrating for democracy in 1989’s Tiananmen Square massacre. Though the number of civilians murdered by the government’s troops and tanks will likely always be unknown, it’s estimated at anywhere between hundreds and thousands. World history knows the atrocity as the “Tiananmen Square Massacre” but the Communists have always tried to minimize the horror by calling it a “riot;” just what Donald Trump calls it.

This wasn’t a matter of suppressing a “riot,” but of savagely extinguishing a subjugated people’s yearning for liberty, a yearning never actively revived as we approach the event’s 27th anniversary in June. At the time, the picture of a lone young man standing helplessly in front of a column of tanks about to bear down on him was on front pages worldwide. Freedom-lovers all over the globe mourned the massacre, many governments condemned China, and the U.S. instituted economic and diplomatic sanctions for a time. The doomed efforts of the Chinese to liberate themselves from tyranny will forever be remembered as one of those iconic events that defines man’s historic quest for freedom and human rights.

But when Trump talked about the “riot” in a Playboy Magazine interview just a year after the outrage, his emphasis wasn’t on the government’s savagery or the bravery of the dead, but on the “strength” of the murdering dictatorship. “The Chinese government almost blew it,” he told Playboy. “Then they were vicious, they were horrible, but they put it down with strength. That shows you the power of strength…”

So although what they did was vicious and horrible, according to Trump if they hadn’t annihilated their political opposition with lethal military force against their own people they would somehow have blown it.  They would have shown weakness. In Trump’s mind, a successful government must assert itself with strength and power no matter how violent.

How would this man react if, as president, he saw a threat to Trumpian government policies from a group of citizens who oppose them? Whose side would he be on, a “strong government” or a dissenter movement? And how is his autocratic tendency acceptable to conservatives and Republicans who tend to be irascibly insistent on our individual rights and freedoms above all else; Americans for whom the best government is the least government?

In the recent debate, Trump was given a chance to recant or at least clarify his Playboy comment. Instead, he basically defended his previous statement, saying, “That doesn’t mean I was endorsing that. I said that was a strong, powerful government. They kept down the riot, it was a horrible thing.”

And horrible things, in Trump World, are sometimes necessary. What is so disturbing here is that Trump’s default to despotism rears its head often enough in other ways to be a pattern. Recently, he unleashed a tirade against the media that once again displayed his instinct for tyranny.

In this case his victim would be the First Amendment freedom of speech. At a rally in Texas, Trump embarked on a rant in which he threatened to change U.S. libel laws to make it easier to sue the media, declaring, “I’m going to open up our libel laws so when they write purposely negative and horrible and false articles, we can sue them and win lots of money. ... So that when The New York Times writes a hit piece, which is a total disgrace — or when The Washington Post -- write a hit piece, we can sue them and win money instead of having no chance of winning because they're totally protected.”

Yes, they are totally protected, Mr. Trump, and have been for over two hundred years now so you should have heard about it. One paper’s politician profile piece is another paper’s hit piece, and it’s all protected unless you can prove malice which is very, very difficult to do. By the way do you know why the media is protected; have you ever read the Constitution? Here’s the short form from Amdt. 1 also known as part of the Bill of Rights: “Congress shall make no law …abridging the freedom of speech or of the press…” Then too, it doesn’t say the president shall make no law.

With Trump’s lifelong theme expressed in the Frank Sinatra anthem “I Did It My Way” and Barack Obama’s 7-year tutorial in how to get away with imperial overreach without fear of reprisal, do you think Mr. Trump would issue more or fewer lawless executive orders than his predecessor?

Is there any actual reason to expect someone who thinks this way, whose first impulse as chief executive is to turn despot, would hesitate to bring the hammer down on his political foes as Obama and Co. viciously wielded the IRS against the liberty and tea party movement?

I recall when, early on, Trump crowed that for decades he had donated big bucks to politicians of every persuasion, especially Democrats in notoriously corrupt New York and New Jersey, because “when you give, they do whatever the hell you want them to do.” Yes. And isn’t that precisely what you Trumpians are dead set against?

Any who believe that mean, do-it-my-way Trump has been magically replaced by benevolent, presidential Trump need only look to another revealing moment in the campaign when the candidate advocated “taking out” the families of terrorists. Informed by the moderator that U.S. troops would refuse that order because it would be a war crime, Trump insisted, “They won’t refuse. They’re not gonna refuse me. Believe me.”

His clear preference for ordering everyone around even finds voice in his economic policies. To bring jobs and corporations back to the U.S. he won’t lower corporate taxes as would any sensible politician. No, again his fallback isn’t the carrot but the stick.

Trump pledged he’d slap a 45 percent tax on any company thinking about moving their enterprise to another country to save money. The crowd went wild. Under further questioning, Trump clarified, “It’s not a tax, it’s a threat. But it will be a tax if they don’t behave.” Better behave for Big Daddy, kiddos. Ted Cruz observed to the crowd, “You will be paying that tax, the American people.” Not to mention it would curtail American corporations’ freedom in a way that is certainly unconstitutional.

Not that Trump ever talks about freedom or individual liberty, topics dear to so many of the patriotic Americans who, incredibly enough, support him. No. It’s all about winning, about doing it his way. This is chilling stuff. Ask yourself, America: don’t you want to be rid of Napoleons when the incumbent finally vacates the White House?

An elective despotism was not the government we fought for -- T. Jefferson