Jesus Was a Rabble-Rouser So Why are Today’s Preachers Silent?

Joy Overbeck
|
Posted: Jan 08, 2016 12:01 AM
Share   Tweet
The opinions expressed by columnists are their own and do not necessarily represent the views of Townhall.com. 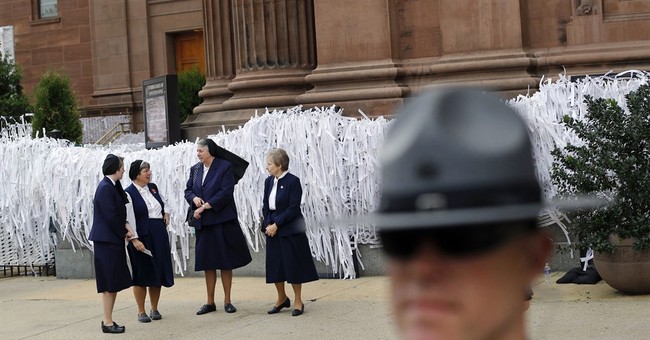 Whether it’s Christian bakers, florists, photographers and even pastors being fined thousands of dollars or shut down because their Biblical beliefs don’t embrace gay weddings; Christian military chaplains reprimanded, demoted or fired for praying in the name of Jesus; Catholic schools and charities hounded by lawsuits for refusing to supply abortion-causing drugs ordered by Obamacare; or a football coach losing his job because he led his players in prayer after a game, government’s persecution of Christians who desire only to live out their faith doesn’t seem to alarm most pastors and priests tending the flock.

The leaders of many churches stay silent, strangely uninterested in defending their fellow Christians by speaking out in the “free exercise” of their religion guaranteed by the First Amendment. The reasons seem to be three-fold: they’re afraid the IRS will revoke their tax-exempt status; they may think their mission is to promote Jesus’s message of love and charity and not get mixed up in “politics”; and many fear that controversy will alienate some pew-sitters and take a bite out of donations and attendance numbers.

All of these excuses are basically nonsense. When Barack Obama took to church pulpits in his presidential campaign of 2008 and again when running for re-election 2012, there was no hue and cry about the liberals’ alleged inviolable “wall of separation.” As Mathew Staver, one of the nation’s leading constitutional attorneys, Dean of the Liberty University School of Law and founder and chairman of Liberty Counsel which defends First Amendment cases has written, “No church has ever lost its tax exempt status for endorsing or opposing political candidates. This history alone should alleviate unfounded fear. Pastors can preach on biblical, social and moral issues such as homosexuality and abortion. Churches may host voter registration drives, forums where candidates address the congregation or answer questions from a moderator.”

Continues attorney Staver: “Candidates may preach in the pulpit so long as the pulpit is not used as a political forum to urge the members to vote in favor of the candidate.” Any pastor questioned by the IRS about this can just ask the IRS who they think Mr. Obama was endorsing from the pulpit – Mitt Romney? Staver adds, “No pastor has ever been targeted by the IRS for giving a personal endorsement from the pulpit.”

Hopefully pastors know they are free to speak out despite the threatening letters often sent by atheist or separation-of-church-and-state groups who aim to make them sit down and shut up, especially in election years. These anti-Christian groups realize that if the full power of the overwhelming majority religion in this country voted its Biblical values, things would change in a hurry.

Pastors who contend they must duck political issues because their Gospel message is about God, not politics, are just plain wrong. Christian morality and political issues are intrinsically intertwined, in the Bible as in real life. The Word of God has a great deal to say about marriage, homosexuality, adultery, the sanctity of life, and even “hooking up” as well instructing church leaders on their duty to affirm the God-given truths in the Bible.

But it takes courage to speak out and defend those values against a powerful, controlling government whose only religion is political correctness. If ministers of Christ’s Gospel would take Jesus himself for their model, they would find that courage. Jesus was far from the meek and mild, lover-not-a-fighter of his popular image. In actuality he was a fiercely rabble-rousing preacher who wasn’t afraid to call out the ruling elites of his time for their hypocrisy and injustice.

Although the Romans were the ultimate authority, the Jewish priestly council called the Sanhedrin was the governing body that really regulated the day-to-day life of the people. They also functioned like a Supreme Court, judging and meting out their own punishment to those who didn’t conform. They could impose stoning, torture, or even death on the rule-breakers. Their obsessive regulation of peoples’ lives through intimidation was very like the bullying the government carries out against Christians today.

Like Mr. Obama, they had invented many of their rules and “laws” by executive order, actually hundreds of them that controlled most aspects of the peoples’ everyday lives. Jesus defied their arbitrary rules by telling them their man-made laws violated God’s superior law, just as our government does today. And he was not polite about it.

“Woe to you, scribes and Pharisees, hypocrites!” He scolded the religious leaders. “For you are like whitewashed tombs which indeed appear beautiful outwardly, but inside are full of dead men’s bones and all uncleanness. Even so you also outwardly appear righteous to men, but inside you are full of hypocrisy and lawlessness.” (Matt. 23: 27, 28) Sounds familiar.

The religious officials even had several hundred rules that regulated what “work” the people were allowed to do on the Sabbath. Cooking had to be done the day before because it is work, and travel was not permitted if it involved saddling donkeys, also work. Healing a suffering human was likewise considered work, and forbidden unless a matter of life and death.

Jesus challenged their man-made laws, perhaps deliberately goading them by often doing his miraculous works on the Sabbath. One time, He was in the synagogue and saw a man with a withered hand. According to Matthew Chapter 3, the religious leaders “watched Him closely, whether He would heal him on the Sabbath, so that they might accuse Him. ..Then He said to them, ‘Is it lawful on the Sabbath to do good, or to do evil, to save life or to kill?’ They said nothing and Jesus was angered by their silence, “being aggrieved at the hardness of their hearts.” After He healed the man, the religious leaders “went out and immediately plotted…against Him, how they might destroy Him.”

Then as now, authoritarian governments have always seen Biblical values as a threat to their secular power. When God’s moral imperatives clash with governmental edicts, pastors must speak up, giving their flock the courage to live the Christian life. When the choice is between God’s law and man’s law, pastors must urge their congregations to choose God’s law.

Pastor Martin Luther King wasn’t afraid to speak out to uphold the black minority’s God-given right to equality and justice despite the government’s discriminatory laws. His boldness ultimately cost him his life. When Hitler transformed the Christian church and its leaders into puppets of the Nazi regime, Pastor Dietrich Bonhoeffer refused to submit. He helped organize a new church movement in opposition to the Nazification of German Christianity, and spoke out tirelessly against Hitler’s programs of euthanasia and Jewish persecution. He was hanged in a concentration camp in 1945, just two weeks before the Americans liberated it.

Of course American pastors don’t face such drastic consequences; they can rely on their Second Amendment protections when they speak out against the government’s anti-Christian actions and rules. They would do well to remember Bonhoeffer’s words, “Not to speak is to speak, not to act is to act.” And Christ’s request just before His ascension when He told the Apostle Peter that if he loved Him, he would “Tend my sheep.”
Bipartisan Letter from Congress Demands Answers from Fauci on Why Taxpayers Funded Experiments on Puppies
Rebecca Downs
McAuliffe Can't Draw Crowd in Blue Arlington, and Other Cringe Details in the Final Days of Virginia Race
Rebecca Downs
Sen. Hawley Calls on AG Garland to Resign Over Memo Targeting Parents at School Board Meetings
Landon Mion
Yet Another Afghan Refugee Has Been Charged with Rape
Rebecca Downs
Fox News' Chris Wallace: Jen Psaki is 'One of the Best Press Secretaries Ever'
Landon Mion
Twitter Censors Official Account of Rep. Jim Banks for Tweet About Rachel Levine
Rebecca Downs