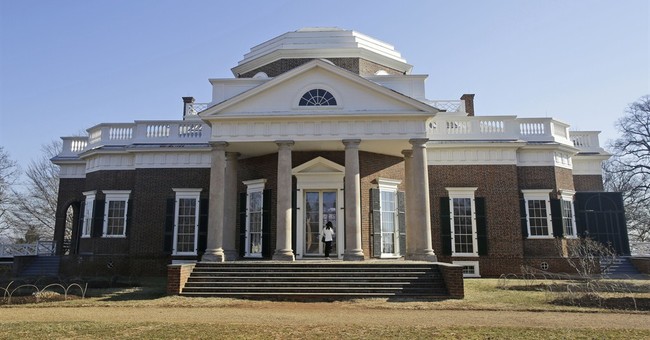 The occasion of our nation’s birthday is a good time to look back at where we started and where we are now; how the Founders envisioned our nation and how faithful we have been to that vision.

I will focus on Thomas Jefferson because he was the dominant intellectual thought leader. Jefferson is variously viewed as a deist, a non-Christian or perhaps even-anti Christian. But it is clear from his writings and especially his life-long fight for religious liberty that he considered himself a Christian, and would have voted against imposing same-sex marriage in the recent Supreme Court decision.

Virtually anyone who was educated in the 18th Century before public schools existed was taught as was Jefferson by the only scholars of the time: Christian pastors. The Bible was the daily reading exercise. Christ's statements about the preciousness of all human life, that all people no matter their status or circumstance or sinfulness are equally beloved by God, greatly influenced the Founders’ philosophy, and especially Jefferson’s wording of the Declaration of Independence.

The committee creating the document that laid America’s foundations appointed Jefferson to write it because of his wordsmith talent. And Jefferson wrote God into the Declaration of Independence not once but three times, asserting that “Nature’s God” entitled the rebels to dissolve their bonds with Britain; declaring that all men are “created equal…endowed by their Creator with certain unalienable rights”; and in the last paragraph stating “a firm reliance on the protection of divine Providence.” No deist would have written Jefferson’s Declaration; deists don’t believe that God interferes in the affairs of men, and Jefferson obviously did.

All his life Jefferson was a fierce champion of religious liberty and freedom of conscience which often made him an enemy of the powerful Anglican Church to which the citizens of his state, Virginia, were compelled to pay taxes. The First Amendment assured that no denomination could be “established” by the federal government as its official religion, partly because the Founders saw the religious freedom of smaller denominations threatened in all the colonies, each with its own chosen dominant religion and church taxing powers.

This fear was the origin of Jefferson’s famous “wall of separation between church and state” which has been twisted by secularists and the Supreme Court into the very opposite of his original meaning.

Newly elected president, Jefferson in 1802 received a letter from the Danbury Baptist Church, a minority congregation in Connecticut, where Congregationalism was the state-sponsored religion. Even after the passage of the First Amendment the Baptists feared their religious rights were endangered by Connecticut’s legislature because the state constitution contained no such guarantees.

Jefferson quelled their fears, affirming that “believing with you that religion is a matter which lies solely between Man and his God…I contemplate with sovereign reverence that act of the whole American people which declared that their legislature should ‘make no law respecting an establishment of religion, or prohibiting the free exercise thereof,’ thus building a wall of separation between Church and State.” He closed with a prayer for “the protection and blessing of the common Father and Creator of man…”

Jefferson never intended the “wall” to mean that religion should be bricked off from the public square or the culture, as the courts have chosen to wrongly interpret it. He meant that to ensure the “free exercise” of religion would always take precedence, the First Amendment banned the takeover of a national religion as already practiced on a smaller scale by most of the individual states.

At Jefferson’s direction as president, Christian services were held in the capitol building itself, services he attended faithfully the two terms he served. Obviously he didn’t think he was breaching the “wall” but instead was practicing “free exercise.”

Despite his astonishing lifetime resume of honors and achievements–-including Founding Father, two-term president, Ambassador to France, Governor of Virginia, and much more -- Jefferson requested only three be listed on his tombstone: author of the Declaration of Independence, author of the Virginia Statute of Religious Freedom, and father of the University of Virginia.

The Virginia Statute, a precursor to the First Amendment, reveals more of Jefferson’s thinking on religious liberty. The document forbids forced contributions to the state-sanctioned church, the Church of England, and opens free practice of religion to all.

It begins by asserting that “Almighty God hath created the mind free; That all attempts to influence it by temporal punishments or burthens, or by civil incapacitations tend only to beget habits of hypocrisy and meanness, and therefore are a departure from the plan of the holy author of our religion, who being Lord, both of body and mind yet chose not to propagate it by coercions on either, as was in his Almighty power to do…”

Then Jefferson scolds the “uninspired” civic and religious leaders who would set themselves up as authorities and judges to impose their beliefs on others:

“The impious presumption of legislators and rulers, civil as well as ecclesiastical, who, being themselves but fallible and uninspired men have assumed dominion over the faith of others, setting up their own opinions and modes of thinking as the only true and infallible, and as such endeavouring to impose them on others, hath established and maintained false religions over the greatest part of the world and through all time…”

And finally he specifically condemns any government that would use its power to cause anyone to be:

“restrained, molested, or burthened in his body or goods, nor shall otherwise suffer on account of his religious opinions or belief, but that all men shall be free to profess, and by argument to maintain, their opinions in matters of Religion, and that the same shall in no wise diminish, enlarge or affect their civil capacities…”

Jefferson declared himself “a real Christian, that is to say, a disciple of the doctrines of Jesus” (p. 373 Jefferson by Fawn M. Brodie) whose moral system he called “the most perfect and sublime ever taught by man.” An indispensable element art of that moral system is holy matrimony ordained by God between a man and a woman (Mark 10:6-9).

As a disciple of Jesus’ doctrines, today Jefferson would be aghast at a government that prosecutes Christian florists, photographers, cake bakers, ministers and pizza places for refusing to bend to a “marriage” edict that violates their Christian beliefs and rights of religious exercise. Jefferson would be especially appalled at the idea that judges or government cruelly burdens individuals and businesses “in body or goods” with onerous fines that force them out of business, causing them to suffer for their religion.

Then too, Jefferson never would have dreamed that 236 years after he warned against the “impious presumption….of fallible and uninspired men” these very same men and women in a tribunal created by the Founders called the Supreme Court would exercise such overweening power as to “assume dominion over the faith of others.” He would not approve.