Josh Goldstein
|
Posted: Jun 15, 2017 10:34 AM
Share   Tweet
The opinions expressed by columnists are their own and do not necessarily represent the views of Townhall.com. 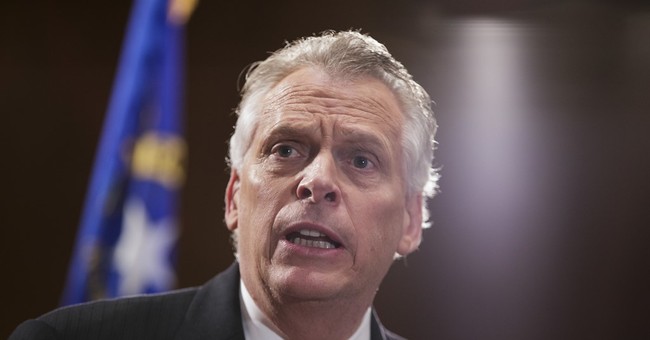 Victims were barely in the hospital before leftist Virginia Governor Terence McAuliffe disgraced a national tragedy by turning it into his own leftist safe space.

Yesterday, an attempted political assassination occurred when a terrorist intentionally shot Republican members of Congress who were practicing for today’s annual, charitable congressional baseball game. The weapon of choice apparently was a rifle. The terrorist was killed by U.S. Capitol Police officers; the same police officers that leftist congresswoman and disgraced former DNC chair Debbie Wasserman Schultz condescended to recently and told, “there will be consequences” for conducting an investigation into her IT equipment.

McAuliffe, Wasserman Schultz’s ally, immediately said at a press conference, likely surrounded by his gun toting security detail, that there are too many guns in the United States. The shooting victims were barely at the hospital before the governor started spewing his nonsense even though what stopped a bad dude with a gun was, at least, two good people with guns. Terence could have used the occasion of a colleague’s shooting, who is still fighting for his life, as a call to prayer and leave politics out of it. Instead the Virginia Governor had to tell us that he believes in taking away the very thing that he will still be allowed to enjoy even as he tries taking it away from us.

Leftists in leadership have no shame. They will do anything to turn a national tragedy into a political game. They won’t even wait for the victims to recover.

Let’s be clear, leftists like McAuliffe know exactly what they are doing. They know better. They live a certain way but tell us to live another way, and they seize on the emotions surrounding tragedies in order to tell us how to live. They cannot make logical, coherent arguments. So they use a shooting.

The crazy thing is, if we took their advice and gave up our gun rights and protections, we would then live in the emotion of constant fear, like in Chicago, while people like him remain in a privileged and protected class.

You want to be political Terence, why don’t you give up your security detail, and live as you ask us to live? What makes you more special? What if Rep. Scalise did not have a security detail yesterday? Are you really wiser than the Founders, many of whom came from Virginia, and wrote the Constitution; the singular most amazing document apart from the Bible?

McAuliffe and those like him are not wiser than ordinary people or the Founders. Consider that leftists know little about weapons and are not good with them. They do not know how to handle them, as Katie Pavlich reminded us.

Within the elites Terence McAuliffe is amongst the worst. He is amongst the worst because he sold out his background and upbringing for political power. He continues ensuring his party is that of the privileged plantation owner. He tells us to live in ways that he would not himself live. He is so radical that he would rather have people confined to ghettos, and without protection, than to have our constitutional protections against assailants and government tyranny. But he supposedly knows better than the Founders of our great nation.

Terence’s sense of timing in this attempted assassination shows that he, like his protégé Hillary, are elitists. They bash police and guns until they need them and then try to take them away. They crave power over the rest of us. They can never be trusted.