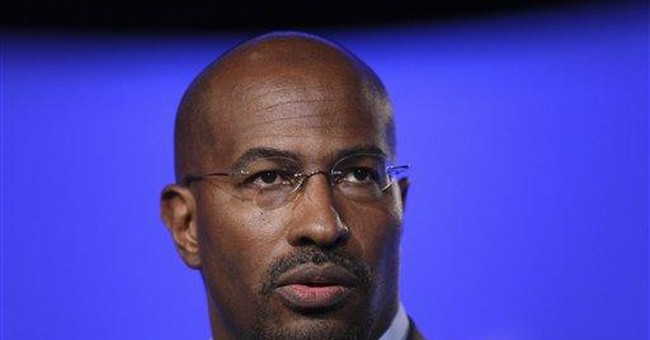 Barack Obama hired Anthony “Van” Jones as a special adviser for green jobs, enterprise and innovation at the White House Council on Environmental Quality. Jones is an admitted “rowdy Black nationalist” and “communist” who was also a co-founder of the communist revolutionary organization STORM: Standing Together to Organize a Revolutionary Movement.

Quick question: how many Marxists, Communists, Domestic Terrorists and raving racialists does the President get to associate with before reasonable people can assume that the president on some level shares their particular vision of America?

While perusing the manifesto of this now defunct STORM, several things struck me as particularly interesting. There was of course the passionate commitment to Marxist ideals, radical feminism, gay lesbian and transgender liberation and the ardent support of the unrepentant murderer Mumia Abu Jamal. And there was this rather innocuous looking paragraph, which I found especially fascinating.

“Storm had a closed membership. People could not just decide to join whenever they wanted to. Instead the group invited small classes of activists to become new members. This insured more consistency and accountability within the membership. It also allowed the group to maintain its strict demographic quota requirements; each class was required to be 75% people of color and 60% women.”

Given their expressed passionate commitment to revolution I was surprised to discover that they would sacrifice principle on the alter of race and gender. If revolution is what one truly desires – a revolution that will deliver “true freedom for our people” shouldn’t that include liberty from being categorized by race and/or gender? Isn’t a shared ideology – shared principles – more important than quotas? These of course are people living in the United States bemoaning the collapse of the Soviet Bloc so rationality may be too much to ask. It may also be one reason this group or Marxist revolutionaries never saw their membership increase beyond perhaps a dozen or so members.

My Friend John Rosenberg asks, “How will we know when racial equality arrives?” Certainly one sign will be when race is not a part of every organizational decision we make, which means for the new left that moment will never arrive. Cynical? Perhaps, but how optimistic can one be when even Marxist revolutionaries are focused on race?

Or our own Justice Department under our “post racial” president?

The Obama Administration has directed the civil rights division of the Justice department to begin aggressively pursuing cases of disparate impact.

Disparate impact theory argues that, in the words of Rosenberg, “statistical racial disparities alone are strong evidence or even proof of racial discrimination” even if there is no evidence of an intent to discriminate or discrimination in the application of the policy, practice or program. Any test or employment practice -- no matter that it has been vetted by experts – is deemed discriminatory and illegal if the results do not reflect perfect statistical proportionality. The question of who studied hard and who perhaps could have studied harder is unimportant. The goal is not equal opportunity – that is the removal of barriers to opportunity put there based on race, but the equality of results as determined by “strict demographic quota requirements.” It has the ring of new liberal nirvana, but Black folk are all too aware that quotas are ceilings not floors.

The philosophical foundation of disparate impact theory is structural inequality: The barriers to opportunity are built into the system; any statistical disparity is a result of a system teeming with racism. The system can’t be fixed; it must be torn down and rebuilt along more equitable lines. Race thus becomes the reason to disavow the founding principles of natural rights and the source of redistributionist policies. Odd as it may sound race is the hammer with which they will rebuild the post racial world.

The reason the president surrounds himself with radical leftists like Van Jones is because on this point he is in fundamental agreement.