How Do We Solve A Problem Like The Donald? 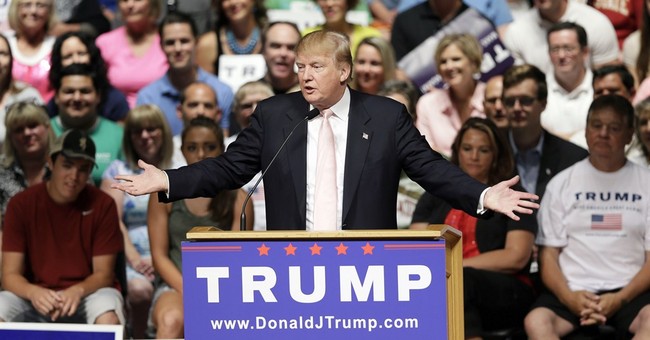 Republicans — both party leaders and voters alike — should be very nervous about Donald Trump.

Last week, The Donald told The Hill that he won’t rule out a third party run, complaining that national Republicans haven’t been very nice to him. The Donald has repeatedly stated he believes his best path to victory is via the Republican Party ticket, but if he fails to win the nomination he has plenty of people begging him to run third party.

One of those people is probably Hillary Clinton. If The Donald goes Perot 2.0, taking a good chunk of conservatives with him, it’s hard to imagine a scenario where Hillary Clinton doesn’t win the presidency.

The Donald is holding the GOP hostage, and he knows it. He’s dominating the Republican primary, taking headlines away from strong conservatives like Marco Rubio and Carly Fiorina, and building quite a following — he leads the rest of the Republican field in almost all of the national polls.

Most pundits would agree that Trump’s odds of actually winning the Republican primary are slim to none—so that begs the question, will he run as a third party if he loses, tanking the Republican nominee in the process and guaranteeing a Clinton presidency?

This isn’t something to laugh off. Donald Trump would not be your typical third party non-factor. With a net worth in the billions, the willingness to self-fund, and a media savvy unmatched by any presidential candidate on either side of the aisle, he could absolutely win 10 to 15 percent of the vote — and maybe even more.

Trump could be using the Republican primary to build a loyal following that he then takes with him to his eventual third party candidacy. We are looking at a 1992 redux — where Jeb Bush is George H.W. Bush, Hillary Clinton is Bill Clinton, and Donald Trump is Ross Perot. Bill Clinton was able to win that election with just 43 percent of the vote, and Hillary could easily do the same.

So how do we prevent this nightmare scenario from happening again?

Well, we can’t. If The Donald wants to run third party, he will. But next week presents a huge opportunity for the RNC.

Next Thursday is the first Republican debate. Any Republican who is fortunate enough to be polling in the top ten nationally is eligible to be on that stage. And barring a cataclysmic change in the polls, Donald Trump will certainly be one of the ten.

But what if the RNC gave each of the candidates a simple ultimatum?

Every Republican running for President that wants to be eligible to participate in the RNC sanctioned debates should be forced to sign a legally-binding affidavit:

That's it. Every GOP candidate would be willing to sign that affidavit — everyone except, apparently, The Donald. So make him sign it if he wants the free TV time. Force him to make a public commitment to running only as a Republican.

If he won’t sign it — if he refuses to promise to not sabotage the eventual Republican nominee with his own third party bid — then maybe it’s time for him to get out of our primary.