Jon Keyser
|
Posted: Feb 18, 2016 9:20 AM
Share   Tweet
The opinions expressed by columnists are their own and do not necessarily represent the views of Townhall.com. 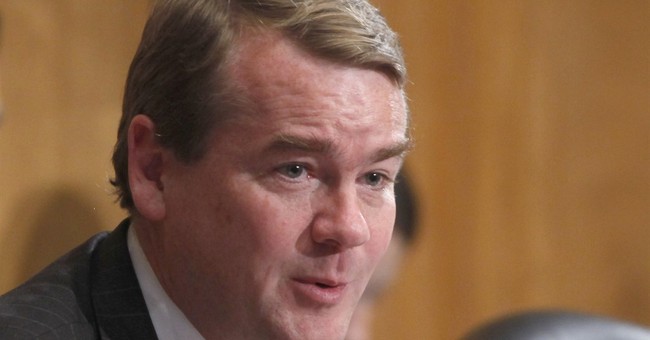 Florence, Colorado may not be a top target for Islamic terrorists today, but it soon could be if Senator Michael Bennet and President Obama have their way.

Since 2009, Senator Michael Bennet has worked to make this nightmare a reality in Florence by consistently supporting President Obama’s efforts to bring terrorists from Guantanamo Bay (GITMO) to the United States. In fact, Senator Bennet voted three times between 2009 and 2015 to enable the transfer of Guantanamo Bay terrorists to mainland America.

According to a recent CNN report, it’s no secret where President Obama and Senator Bennet’s dangerous policies would send the worst-of-the-worst from Guantanamo Bay.

Specifically, the federal prison in Florence, Colorado would be the recipient of these terrorists and all of the notoriety that would accompany them.

As an Air Force intelligence officer and member of a special operations team that served on the ground in Iraq and Afghanistan, I understand the enemy we face, and I served with brave women and men who fought and died to bring terrorists like these to justice.

Senator Bennet apparently cares more about pleasing President Obama and his liberal allies than he does about the safety and security of Coloradans. If I am elected as your next United States Senator, instead of willingly bringing dangerous terrorists to Colorado, I will fight to keep terrorists out.

As Coloradans, we have always been willing to do our part to make the country safe, but we draw the line at endangering our own families for no good reason. And that’s exactly what housing Guantanamo Bay terrorists in our backyard would do.

I have seen it happen around the world. The moment that Senator Bennet and President Obama send dangerous terrorists from Guantanamo Bay to Florence, the city and its residents, and our state, will become targets for bloodthirsty radical Islamic terrorists. Our brave local law enforcement officers will be fending off plots to free these terrorists from prison.

Local law enforcement in Colorado understands this threat and shares the same concerns for the safety of Coloradans. That’s why 41 Colorado Sheriffs recently sent a letter to the President detailing their opposition to transferring terrorists to Colorado.

"We are concerned that utilizing current civilian prisons in our state would significantly - and unnecessarily - endanger our citizens," the 41 Colorado Sheriffs say in the letter to Obama.

Concern amongst the 41 Sheriffs wasn’t down party lines either, the group included seven Democratic Sheriffs who stepped up to the plate and put the safety of Colorado before partisan concerns.

Simply put, Senator Bennet has been dangerous for Colorado and we need to start putting our country back on a path to security in November.

His support for transferring GITMO terrorists, his vote for the disastrous Iran nuclear deal, and his support for giving Iran $100 billion dollars to finance terrorism has made the world a more dangerous place and Coloradans less safe.

Senator Bennet has weakened America and emboldened our enemies. He is dangerously wrong for Colorado, and he needs to be fired. In contrast, I will bring the same vigilance for protecting our country to Washington that I carried with me while fighting our enemies overseas. I will be a warrior, fighting for a safe, secure, and prosperous Colorado.