Thank You For Your Service

Jonathan Feldstein
|
Posted: Apr 08, 2021 11:58 AM
Share   Tweet
The opinions expressed by columnists are their own and do not necessarily represent the views of Townhall.com. 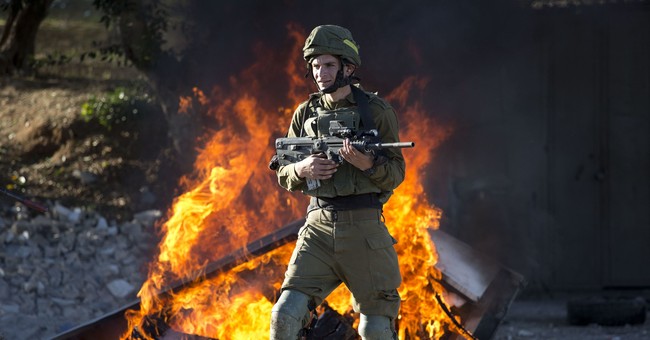 When I travel throughout the United States, I find it especially meaningful to see uniformed soldiers in various airports, and always try to go out of my way to approach them and thank them for their service. Usually, they are in transit between bases, or deployment overseas. As much as I like to get on the plane early, I appreciate that they are offered the courtesy to board before most passengers.   It can never be taken for granted when young men and women choose to join the military. Their service should indeed be appreciated and honored.

While I travel widely throughout the US, I live in Israel.  Here, we see soldiers all the time, just about everywhere.  Because Israel is a small country, there’s no deployment overseas. Rather than being sent home once in a few months, even if our soldiers are serving relatively far away, they typically come home every 2-3 weeks.  Sometimes more often.  And many soldiers live at home.  The nature of their service is different, but the fact that they serve is no less to be taken for granted.

There are two main differences relating to military service in Israel as compared to the US, and most of the rest of the world.  First, service is mandatory for most young men and women 18-21, Most men continue with reserve duty until 40.  Second, Israel remains at a state of war with most of its Arab neighbors, and there is never a day that there’s not a real threat of violence, if not a war breaking out that puts their (and our) lives in danger.  The Israeli army is an extension of God’s hand, providing invaluable protection every day, without which Israel would not be able to exist or thrive as it does.

This week, Israel observes Memorial Day. The feeling and significance of Memorial Day in Israel is vastly different than in the US, and probably every other country, because the soldiers are all of us.  They are our sons and daughters, our friends, co-workers, and neighbors.  Most Israeli adults have served. Most Israelis know someone personally who we memorialize on this solemn day, or know someone who is mourning loss personally.  Unlike in other countries where most people do not serve, are not at war, and where military service is far from home, in Israel it’s all up close and personal.  Rather than being deployed, the front is in our backyard.

I have written and spoken often about the importance for Americans and others to adapt Memorial Day as the truly solemn day it should be.  It should never be a holiday weekend with sales and greetings of “Happy Memorial Day.” There are many ways this can be done, and I am glad to offer suggestions. I’m not an expert, but to the extent that we have to do so, Israel does Memorial Day right.  This year, we will mourn some 24,000 people who lost their lives due to war and terror.  It doesn’t seem like a lot but if you consider that today Israel only has 9 million citizens, and that 6000 died in the War of Independence, a full 1 percent of the population of the new country, it’s astounding.

I receive requests regularly from people around the world, Jews and Christians, asking how they can bless and support Israeli soldiers.  Of course, we shouldn’t draw a direct link between remembering those that have died, and those who are serving today.  We pray that they will finish their service safely, uneventfully, and certainly that no more soldiers or civilians become victims of war or terror. But when we do remember the dead, it’s important to salute those serving, to pray for them, and to bless them by showing appreciation and support.

Generous donations to the Genesis 123 Foundation have provided soldiers with warm coats and gloves for winter, hot soup for those guarding outdoors on frigid nights, cold drinks, watermelon, and ice cream in the heat of the sun, and Shabbat and other holiday meals and treats, just to show appreciation. In addition to providing tangible ways of saying thank you to Israeli soldiers, with so many things going virtual this past year, there’s now an opportunity to salute and bless Israeli soldiers personally, from thousands of miles away.

This year, you and your children can send warm notes of support and blessings to Israeli soldiers from all over the world.  The Genesis 123 Foundation’s Bless a Soldier program allows anyone, from anywhere, in any language, to send their personal notes that will be delivered directly to soldiers throughout the country.  Think of it as you personally saluting an Israeli soldier and saying thank you.

Blessing and supporting Israel’s soldiers is one main pillars upon which Jews and Christians can come together.  Already, individual adults, entire classes in a variety of schools, and churches and synagogues have participated.  Bless a Soldier saves the effort, cost, and time of finding out what stamp you need to use to mail a letter to Israel, and allows you to do that from the comfort of your own home.

What are your prayers for Israel’s brave soldiers?  What does their service protecting the country mean to you?  How can you engage your children in something that’s educational and meaningful?  If you could give a hug to a soldier and bless them, what would you say?  Now you can.  Please take a minute to join this project and share with others so that this week especially, and throughout the year, we are able to salute Israel’s brave soldiers and show our appreciation.

And don’t forget, wherever you are, when you see a soldier in uniform, take a minute to thank him or her for their service.

Author's note: In commemoration of Memorial Day, the Genesis 123 Foundation will host a webinar on Monday, April 12 (2:00pm Eastern/11:00am Western time US) with bereaved family members of those who have died. Advance registration is recommended.

Rebecca Downs
Despite What Haters Say, 'Gutfeld!' Off to a Great Start in First Week
Rebecca Downs

Letting Hunter Biden Off Is A Message To Us Peasants
Townhall
'WE WILL NOT COMPLY': The City of Burbank put up a chain-link fence to keep Tinhorn Flats from opening
Twitchy
Rioting and Looting in Suburban Minneapolis After Young Black Man Shot and Killed by Police
Redstate
Trump Vindicated as Judge Rules Michigan Secretary of State Violated Election Laws
PJ Media