Mistakes of the Past Complicate the Khashoggi Affair

Jonah Goldberg
|
Posted: Oct 24, 2018 12:01 AM
Share   Tweet
The opinions expressed by columnists are their own and do not necessarily represent the views of Townhall.com. 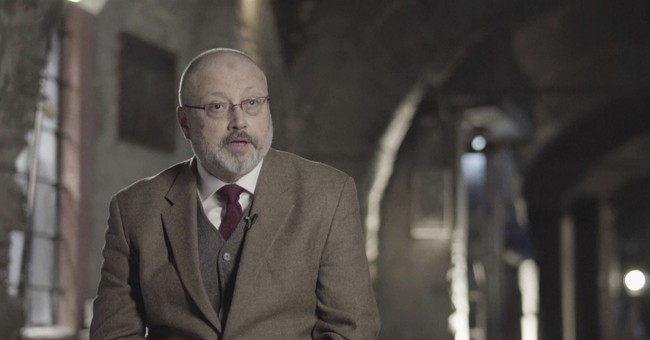 The biggest mistake the Trump administration made in the Jamal Khashoggi case occurred while Khashoggi was still alive: letting Saudi Arabia's crown prince, Mohammed bin Salman, think he could get away with something so heinous -- and so heinously stupid.

But the bell was rung, as it were, and there is no way to unring it.

The Saudis surely made everything worse by lying about it. But the aftermath is such a complicated mess because it illuminates decisions made long before Prince Mohammed's goons brought a bone saw to Istanbul.

It's a bit analogous to the assassination of Archduke Franz Ferdinand, heir to the throne of the Austro-Hungarian Empire. That murder sparked World War I, yet the war was about far more than the murder of a single official.

Look at the situation from the Saudi perspective. The U.S. has turned a blind eye to far larger horrors, including the Saudi-led war in Yemen. Prince Mohammed's forces reportedly target civilian centers and tolerate rape, torture and the conscription of children. The Iranian side is just as guilty.

Saudi Arabia also executes about 150 people a year, mostly by beheading and occasionally by stoning. In recent years, several women were executed for practicing "witchcraft" or "sorcery." Yet the U.S. doesn't say boo about that.

Instead, the Saudis have gotten two mutually reinforcing messages from the White House. First, President Trump has repeatedly said that every country has a sovereign right to protect its own distinct culture.

Well, in Saudi Arabia's distinct culture, rulers can do whatever they can get away with, particularly with regard to their own citizens. From Prince Mohammed's perspective, Khashoggi -- a longtime supporter of the Muslim Brotherhood and an operator in the Saudi court -- was an obstacle to reform and a tool of his enemies. That he had a U.S. tourist visa and a column in the Washington Post didn't change that. It made him a greater threat.

The second message is that Saudi Arabia is our ally. This isn't new, but the Trump administration has taken it to new, personalized extremes. So long as Saudi Arabia helps contain Iran, softens on Israel and keeps the oil flowing out (and the weapons in), they can have a free hand.

To paraphrase FDR, the man who forged the U.S.-Saudi alliance, the Saudis may be SOBs, but they're our SOBs.

The Saudis are also getting a third message, one that is coming more from the world of NGOs, op-ed pages and Wall Street than from the West Wing: Saudi Arabia needs to reform its economy and culture.

Indeed, Prince Mohammed jumped the line of succession to do precisely that. It's thanks to him that women are finally allowed to drive in the kingdom.

One of the more cynical talking points among those calling for new leadership in Saudi Arabia is the idea that reformers in backward authoritarian nations don't do terrible things.

The shahs were reformers, supporting Western-style modernization and women's rights. They were also brutal dictators.

Mikhail Gorbachev was a reformer. But I would be stunned if he'd never had anyone murdered. Regimes founded on mistaken principles have few nice options when seeking to reform.

The point isn't that the ends justify the means, but that when dealing with murderous regimes, the choice is often between the more tolerable of murderers.

The Turks are even worse. Along with Iran, Turkey is competing with Saudi Arabia for regional dominance, and Khashoggi's death is merely a propaganda tool for them. The Turks are brilliantly feeding evidence in drips and drabs to an indignant Western press.

I get the indignation, but has no one followed the mass arrests and periodic assassinations of journalists under President Recep Tayyip Erdogan? Do people really believe the Turkish tyrant and NATO ally -- who calls journalists the "gardeners of terrorism" -- is sincerely offended? Should we call for Erdogan to step down? Why not?

I have no good idea for what we should do next, because the problem isn't really the killing of Khashoggi. As outrageous as it is, Khashoggi's murder is a symptom of a far longer series of mistakes.

Ukraine's President Just Blew Up Joe Biden's Spot on the Whole Situation With Russia
Townhall
'Written by a white author': It's pretty clear blue-checks did not click on the link in this Jake Tapper tweet on 'To Kill a Mockingbird'
Twitchy
Election Law That Helped Make Joe Biden President Struck Down as Unconstitutional
Redstate
[WATCH] Student Destroys School Board with Withering Speech: 'Thank You For Teaching Us We Should Never Question Authority'
PJ Media