Iggy the Crusader Victimized by a Misguided Crusade

Jonah Goldberg
|
Posted: Mar 23, 2018 12:01 AM
Share   Tweet
The opinions expressed by columnists are their own and do not necessarily represent the views of Townhall.com. 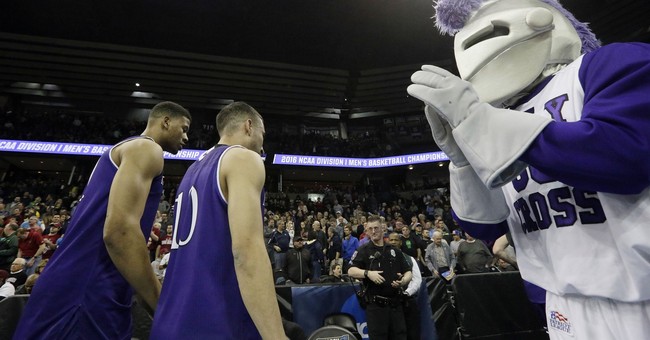 A liberal, the old joke attributed to Robert Frost goes, is someone too broad-minded to take his own side in a quarrel.

Something similar is going on with Catholics. Just ask Iggy the Crusader, who for years served nobly as the mascot of the College of the Holy Cross.

Holy Cross is throwing Iggy under the bus.

This was a necessary step in the larger effort to purge the school of any association with the Crusades. "The visual depiction of a knight, in conjunction with the moniker Crusader, inevitably ties us directly to the reality of the religious wars and violence of the Crusades," the Rev. Philip Boroughs, president of Holy Cross, explained in a statement.

This is all ludicrous.

Let's start with poor Iggy. Knights are not synonymous with the Crusades. There are knights in "Game of Thrones." Do you immediately think of the sacking of Jerusalem when you watch that show? How about when you play any of a gazillion video games, or even the old-school Dungeons and Dragons? How about when you watch King Arthur movies? Or when you listen to "Knights in White Satin," Giorgio Moroder's disco homage to the Moody Blues' "Nights in White Satin"?

Maybe you do. But if that's the case -- if you see a knight in shining armor and immediately think of "the reality of the religious wars and violence of the Crusades" -- well, that's on you.

Let's be honest: If you're the sort of person who can't let go of Christianity's role in the Crusades nearly 1,000 years ago, excommunicating Iggy won't solve the problem.

And yet, Holy Cross is just the latest of many institutions to abandon any association with the Crusades. Campus Crusade for Christ shortened its name to Cru a few years ago because the C-word had become too radioactive.

"It's become a flash word for a lot of people," Cru's vice president, Steve Sellers, told Christianity Today in 2011. "It harkens back to other periods of time and has a negative connotation for lots of people across the world, especially in the Middle East. In the '50s, 'crusade' was the evangelistic term in the United States. Over time, different words take on different meanings to different groups."

That's all true. The word "crusade" does have different meanings to different people.

In the last century or two, the story of the Crusades was rewritten to fit an anti-imperial, anti-colonial, anti-capitalist narrative. The European invasion of the Middle East was the first chapter in the evil empire that was Western civilization.

This is all nonsense. Christianity -- which is older than Islam -- was in the Middle East far earlier (and Judaism has squatters rights going back millennia). Christianity originates as a Middle Eastern faith (you can look it up). The forces of Muhammad took the Holy Lands from the Christians, but this was not some indigenous anti-colonial uprising. It was a relatively minor conflict in a backwater region of the Muslim world. The real action was to the west in Constantinople (now Istanbul).

Bernard Lewis, arguably the greatest living English-language historian of the Muslim world, writes: "The Crusades could more accurately be described as a limited, belated and, in the last analysis, ineffectual response to the jihad -- a failed attempt to recover by a Christian holy war what had been lost to a Muslim holy war."

Or, as historian Thomas Madden has written: "Now put this down in your notebook, because it will be on the test: The Crusades were in every way a defensive war. They were the West's belated response to the Muslim conquest of fully two-thirds of the Christian world."

It is absolutely true that horrible things were done on both sides of the conflicts. And as a guy named Goldberg I don't have much skin in this fight.

But what I object to is this reflexive assumption, peddled by a diverse unintended coalition of Western social-justice warriors and Muslim radicals, that the West is the villain in every tale and that to demonstrate a progressive worldview, Christians -- and Westerners generally -- must shed their own cultural heritage to appease people looking to be offended by things they don't understand.